A morning photographing on the streets of New York City 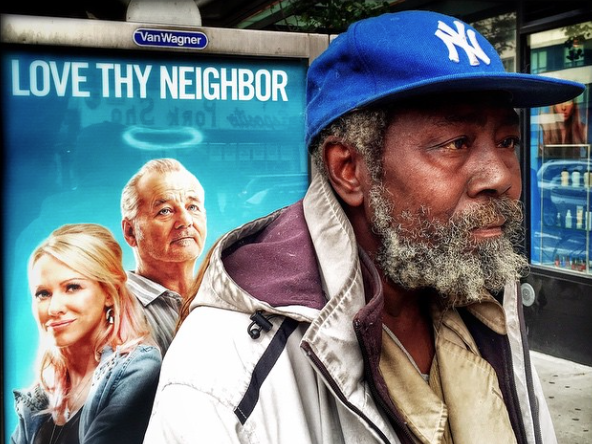 On most days, Ruddy Roye can be found making pictures in the streets of New York City. Usually alone, on occasion he’ll be joined by photojournalist friends, like Ben Lowy, a fellow prolific, early adopter of Instagram. On Wednesday morning, he was surrounded a dozen photographers, from a broad range of backgrounds and skill sets, accompanying him on a Photo Walk, “Giving Words to the Portrait,” kicking off PDN’s 2014 PhotoPlus Expo.

“I’m different than many photographers. Everyday I go out to shoot I have an agenda, a word in mind,” Roye told the group as he lead up 11th Avenue from the Javits convention center toward a favored stretch of 38th Street on an overcast Manhattan morning. “Isolation, invisible, hopelessness, homelessness.”

The Jamaican-born Brooklyn-based documentary photographer and self-described “Instagram Activist,” gained prominence during Hurricane Sandy, which had touched down on the East Coast two years ago to the day. After many years using a range of cameras—from Leicas, Rolleis, and Hasselblads to the 8×10 view camera—amassing countless negatives most of which have never been seen, he had gone out instead equipped with only his smartphone. The gripping images he made during the storm spread like wildfire on Instagram earning him (to date) over 100,000 followers and a stream of editorial assignments and coverage from the New Yorker to the New York Times.

“People fear the camera phone but in the last two years I have made more money with my phone then all those cameras,” he said. “No difference between an iPhone and an 8×10. When I shoot,” he gestured, approaching a man smoking under a scaffolding on 8th Avenue from a distance of maybe four feet, camera phone extended, eyes focused on screen, “it’s the same process.” He hit the shutter; the man noticed, but didn’t recoil, and Roye moved on.

“How do I use my body to make that person feel comfortable without saying a word?” Roye asked. If the man had moved, or looked at him cross during the making of the close-up candid image, “That means they didn’t want that picture and I have to introduce myself, tell them what I’m doing.”

No matter who it is he stops on the streets for a portrait, Roye takes as much time as they’re willing to offer. He learns their stories in great detail while gesticulating in a kind of balletic way to find the right angle and compose the lines of the neck, chin, and shoulders of his ‘collaborators.’ “I hate the word ‘subjects’,” he said. “I’m not a king.”

As the group moved crosstown towards Times Square, Roye ducked around the corner on 9th Avenue. He spotted Reuben, an older gentleman he met two days prior panhandling in the area, and meticulously composed the frame embedded here above.

Many photo teachers will tell novice students to avoid photographing the homeless, a frequent theme in Roye’s work, because there is tremendous risk of creating an image, an aesthetic object that falls somewhere on a spectrum from cliché to exploitative. Roye is an exception, infusing each portrait with dignity and integrity.

“I fight for [Reuben] visually. Images burn, images stain,” he said. “I need to know that story and push it out because no one else will.”

Roye said he identified with the man, “I feel what he feels — isolation, invisibility. It can happen to anyone. If I didn’t take that photo class… it could have been me.”

The first visual impression people get when they meet him, he said, is the not too far off from when they encounter the homeless. “It’s all for the future, so people who look like me, like my son, years later have it better.” He pushes these images and stories in front of people, on Instagram, where they are less likely to simply look away.

“It was great to to see through his perspective, how he sees and interacts with the world,” said Mouhsine Idrissi, a Moroccan-born, New Jersey-based documentary photographer, after attending the Photo Walk. “Now I can relate his personality to his work and vision. And it’s improving the way I understand my own interaction with people on the street.”

Ruddy Roye is a Brooklyn-based documentary photographer. Follow him on Instagram @RuddyRoye and see more photos made during this Photo Walk using the hashtag #rrppe.

PDN PhotoPlus Expo runs at the Javits Center in New York through Nov. 1, 2014.