With this image, shot for an Australian fashion magazine, photographer Thierry Van Biesen does more than create a unique showcase … Continued 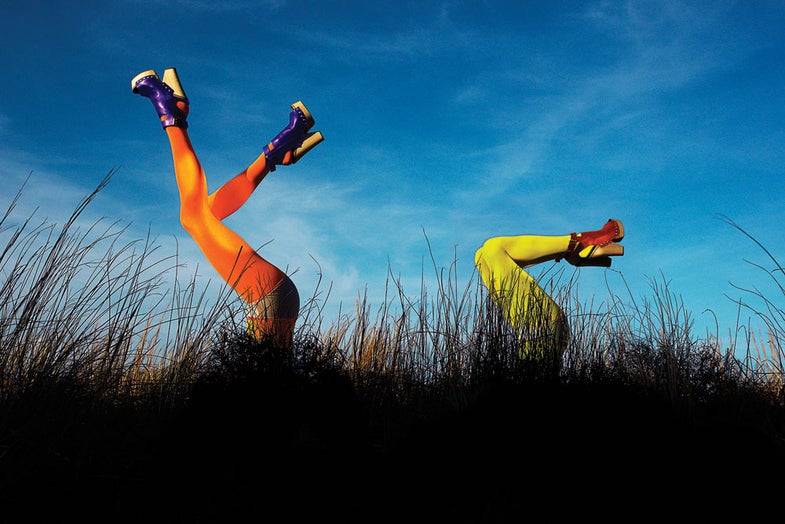 With this image, shot for an Australian fashion magazine, photographer Thierry Van Biesen does more than create a unique showcase for shoes. He takes us into a fantasy. The models, captured near the eastern tip of New York’s Long Island, seem like exotic, wildly colored animals on the African savanna or animated, psychedelic flowers in some magician’s garden. But take note: These whimsical stems arise from darkness.

As a child in Beirut during Lebanon’s civil war, Van Biesen became accustomed to seeing atrocity and violence. “Life was difficult because I was close to death all the time,” he says.

In 1976, when he was 11, Van Biesen’s beloved great uncle, who worked as a photographer in the 1920s and was a major creative influence, was accidentally killed by soldiers on his way home from a party. In his devastation, Van Biesen vowed to change his outlook: “I made an oath to myself that none of this would touch me. I suppressed everything.” With this powerful new coping tool, he found an enhanced beauty in the horror, telling himself that he saw fire-works over his home instead of falling bombs.

Van Biesen began taking pictures while study-ing to become a math teacher at the Ameri-can University of Beirut. After graduating and then teach-ing in Abu Dhabi, he was moved to pursue  a more creative career, so in 1989 he went to New York, where he assisted prestigious photographers such as Duane Michals and Arthur Elgort.

Now based in Brooklyn, Van Biesen has man-aged to shed the repressed vision of his youth— “I began experiencing everything around me like a newborn,” he says—but still relishes a dreamy visual language. His enduring optimism and fearlessness are revealed in his images as bold colors and movement.

The vibrant image above started with a walk along the marshes and turned into a visual pun: “Lines Between the Reeds.” Van Biesen adores the freedom of digital photography but did only minimal retouching here. He used mirrors during the shoot to create reflections and texture.

And while Van Biesen may have a clearer way of looking at the world today, his goal is the same as ever: “I still want to say life is beautiful.”