Over time, photographs store up a certain power. Reflecting on a 1987 photo of three boys in a London park... 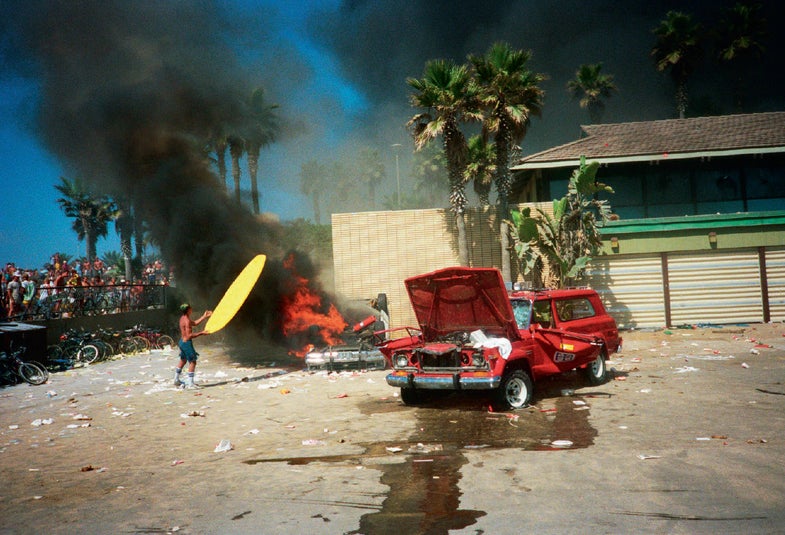 Over time, photographs store up a certain power. Reflecting on a 1987 photo of three boys in a London park in our Behind the Notes post earlier this week, Chris Dorley-Brown said that perhaps its recent Tumblr popularity demonstrates that, for photographs, “the value as a historical document takes a while to accrue.” Although Nick Waplington’s book Surf Riot was published just last year (by Little Big Man Books), all of the photos were taken in 1986, in the midst of some unusual events in Huntington Beach. In other words, it presents a test of Dorley-Brown’s hypothesis.

The story behind Surf Riot goes like this: on the day of the 1986 OP Surf Pro Championships, Waplington arrived at the event to find that a massive riot had broken out amidst the event’s estimated 100,000 spectators. As he writes in the book’s afterword, “I had one roll of 24 exposures. I made 25 pictures. They are this book.” It’s easy enough to explain, and the photographs themselves certainly hold the eye, to say the absolute minimum. But why has the book been released now? What has the passage of almost 30 years done to these images? What could possibly be the value of one roll of film, shot over the course of a few hours, “as a historical document”? 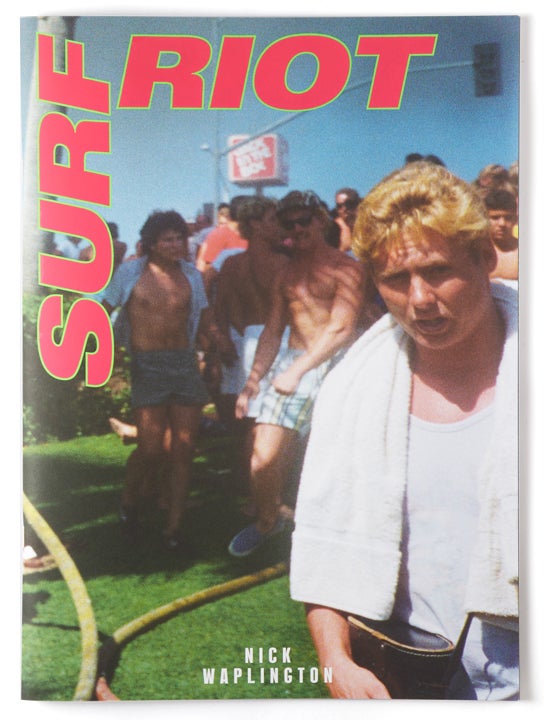 I want to suggest that there is more history in the details of these photographs than their depiction of the riot itself. The facts relating to the event can all be found in a 1986 Los Angeles Times article which presents things in the familiar form of a hard news writeup: times, figures and quotes from official police sources abound. That’s just information, though. What’s historical about these photos is what was captured incidentally. Take the photo of a young guy throwing a surfboard onto a burning car. For me, the “amazing” factor here—”dude, this guy is throwing a surfboard onto a BURNING CAR!!”—wears off pretty quickly. (Here you could draw a connection to Tumblr, where things are always amazing but perhaps not looked at for long.). What makes this photograph great to me are the clothes that the guy is wearing, the way that people are looking at him, the casualness of the entire scene. All these details, taken together, produce a strong impression of the time that transcends the tick-tock of who did what to whom. Surf Riot has preserved a few hours’ worth of 1986 as if in amber.

Why are these photos special, though? Couldn’t any photograph from 1986 show us the same things? Of course. But there are two things that distinguish Waplington’s photographs. In the first place, he’s shot the event in what I would call a very open style, in the sense that he has allowed, or maybe even willed, his camera to pick up these incidental details. I doubt that any newspaper photographer would shoot a random shirtless guy with a camera, or step back to frame up an image of the burning car with the Goodyear blimp, but these images can tell us something. So we have photos that are already in some sense primed to become historical, and then there’s the fact that Waplington has allowed them to sit for so long before releasing them. How many photographers today would sit on a roll of film like this? It strikes me as an almost radically brave act. We are forced to look at the photographs out of context, with fresh eyes, and the large-scale format of the book (11.5″ x 15.75″) only heightens this effect of displacement—it makes the details all the more visible. This feeling of distance might show that the photographs have built up some of Dorley-Brown’s “value as a historical document.”

Looking at Surf Riot, I’m reminded of what Michael Jang told me last year about going through his deep archive of photos, which is only now coming to light: “It’s like mining for gold, or knowing that somewhere you have a great wine that you locked in to a good year, and it keeps getting better and better.” Waplington certainly aged these photos well.