A living legend of conflict photography doesn’t hesitate when war comes to his home town. Here, McCurry tells his 9/11 story, accompanied by a portfolio of his stunning Kodachromes from Ground Zero—some of which have never been seen publicly 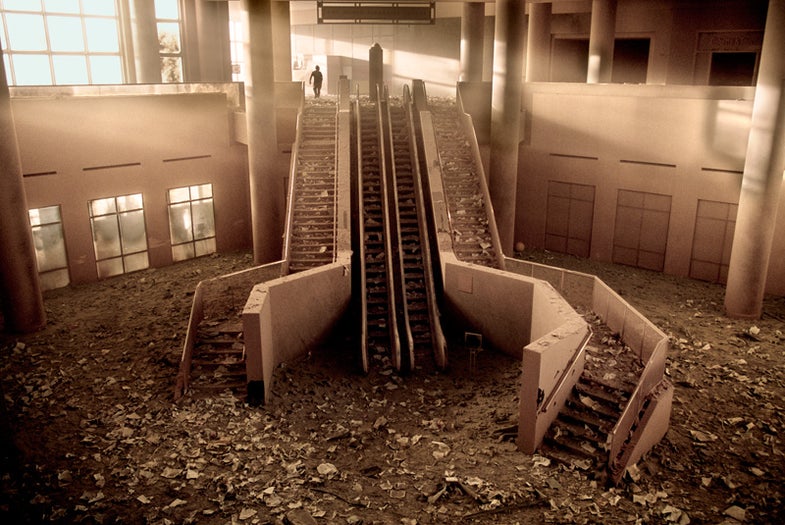 "After I did my initial edit of my photos for the Times, I didn't really look at them for several years, until I started doing a major edit through my entire archive, going through work from my entire career. At that point it became more of a historical document. I had to scan them. At this point if things aren't scanned, in a way they don't exist.". Steve McCurry
SHARE

Steve McCurry’s storied career has produced an incredible wealth of iconic photojournalism. And while he is known for his far-flung coverage of foreign conflict, on September 11, 2001, his focus turned abruptly and inconceivably domestic. The work you see here–some of it appearing publicly for the first time–is a breathtaking testimony of Lower Manhattan as war zone.

_The following interview is excerpted from American Photo’s 9/11: The Photographers’ Stories project—an oral history of September 11 told by the photographers shooting that day. You can find even more individual photographer portfolios and interviews in the iPad edition of the project. _

Steve McCurry: I’d gotten back from a month in Tibet at 8 p.m. on September 10. So on the morning of September 11 I’d been back about 12 hours. I live by Washington Square Park, and my office has a view of Lower Manhattan. I was there, going through mail with my assistant, when we got a phone call saying that the World Trade Center was on fire. I looked out my window and saw both towers were on fire.

I got my camera bag and went up on the roof of my building and started photographing the towers (click here to launch the gallery). We didn’t even know it was a plane, because we were up on the roof without the radio or TV. We all thought it was a fire that would eventually be put out—a terrible disaster, I mean both towers were on fire. I figured I’d shoot it from my roof for about 20 minutes and then go down to the base.

And then they just fell.

I was in a state of disbelief. They were just gone. It didn’t seem possible. Like you’re seeing something but you don’t really believe what you’re seeing. Even though I had seen them implode and there was all this smoke, it was not in the realm of possiblilty for the towers to be gone. It felt like we were living inside a dream, or rather a nightmare.

I had planned to go down there in a matter of minutes and be at that place. If I had gone down there, I would probably have been pulverized by that falling debris. Hundreds were killed who were underneath on the streets below.

After they fell, my assistant and I ran down to Ground Zero to photograph the situation there. It was surreal. There was this very fine white powder everywhere and all this office paper, but there was no recognizable office equipment—no filing cabinets, telephones, computers. It seemed like the whole thing had been pulverized. It was just dust, steel and paper.

It seemed like so much was gone. We didn’t know the extent of the attack, like maybe they hit Wall Street too, knowing the whole financial world was down in Lower Manhattan. Maybe that was all gone too. You jump to your fears. The one thing that was clear was that this was something that was not only going to change my life but the entire world.

It’s a very curious phenomenon when there are literally tens of thousands of people running and fleeing from a situation and a few other people who are rushing toward it. It’s in their DNA; that’s what they do. They want to get in there and find out what’s going on and document and tell the story.

In a situation like that, as a documentary photographer, you had to keep a cool head. Do your job. Document this tragedy in the best way you possibly can. You tell yourself to not overthink things. You have to go on autopilot to some extent, just go on your instincts and intuition and not allow your nerves or your emotions to overwhelm you. We were all completely torn up inside, but you have to get control of yourself and organize yourself so that you can function. Dial your emotions back so that you can put one foot in front of the other.

We were there until 9 at night. Then I walked home, but I couldn’t sleep. So I got up at 3:30 in the morning and walked back down there. As you can imagine, there was serious security: police, firemen, soldiers. But it was very clear to me this needed to be documented. I knew I had to do whatever I had to do to get back down there. I found a way to sneak in by cutting through a fence, and it allowed me to spend the morning of September 12 there. I eventually got removed by the police. They were really angry—the police, the firemen, everyone down there; emotions were running very high. One fireman threatened to beat my brains in with a shovel. I understood their position completely. From their point of view, we were there as tourists or spectators, when really we were there to record history, to create a record of this evil deed. The records of photography and magazines and radio and television are how we’re informed and how we know what’s going on in the world. This was something that absolutely had to be documented, and that’s what I do.

And that was basically the end of my coverage. I didn’t go back again. Other photographers kept going back. For me it was enough to have gone down on the first day, on September 11 and September 12. It also became extremely difficult, almost impossible, to get back down there, even with good contacts from the NYPD and FEMA.

Having spent this very calm, contemplative, serene month in these Buddhist monasteries in Tibet, where it was very empty and quiet, to wake up in the morning and have all of our lives change was overwhelming, very hard to deal with. The smell of the burning towers wafted up into my neighborhood for what seemed to be weeks, and it was kind of always present. In my neighborhood, the World Trade Center was part of the landscape every time I walked from the subway to my place. In Washington Square Park, you could see the towers through the arch. For years I couldn’t bear to kind of look down to Lower Manhattan, even when crossing Sixth Avenue, and not see that landmark.

After I did my intial edit of my photos for the Times, I didn’t really look at them for several years, until I started doing a major edit through my entire archive, going through work from my entire career. At that point it became more of a historical document. I had to scan them. At this point if things aren’t scanned, in a way they don’t exist. The whole point was to document this disaster, this tragedy. I needed to do it as a testimony to what happened out there.

Steve McCurry is a world-renowned photojournalist and the founder of ImagineASIA, an organization focused on aiding students in Afghan communities and providing fundamental educational and health care resources.