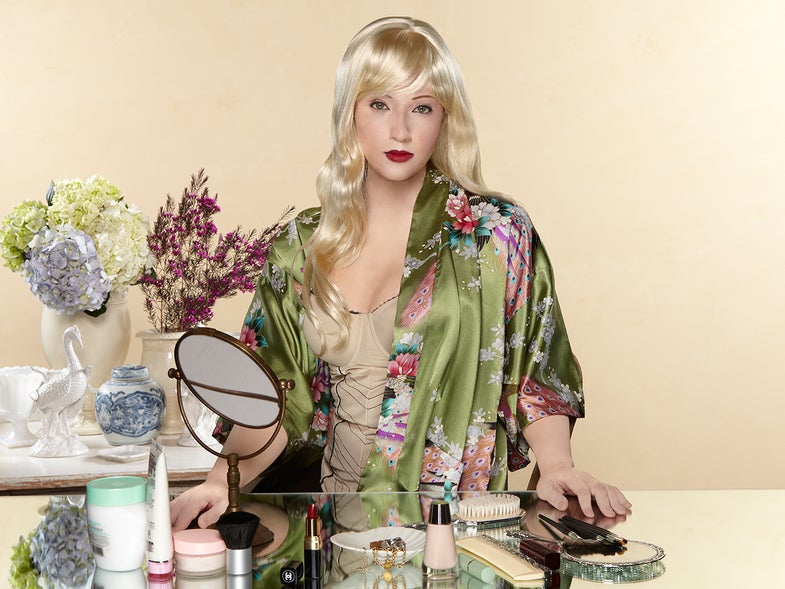 In her photographic series, Backra Bluid, a name derived from both Scottish and Caribbean expressions, Brooklyn-based artist Stacey Tyrell reflects upon the legacy of colonialism and a family comprising both black and white ancestry. Tyrell, who identifies as a black woman, applies white makeup to her skin to photograph herself as her imagined forebears. She explains that her photographic process allows her to come to terms with who she is and how she sees her place in the world.

Although Tyrell’s extended family is originally from the Caribbean island of Nevis, which was a British colony until 1983, the artist grew up in Canada. Her experiences as a black woman from an immigrant family had a profound effect on shaping her vision of race. Tyrell explains that the majority of her high-school peers had little knowledge of colonialism and, as a result, doubted her claims to Scottish ancestry.

In 2011, after moving to the United States, Tyrell began shooting Backra Bluid, which offers a vision of blackness that differs from many visions presented by her African-American counterparts.

“The African-American story is the dominant narrative worldwide for the black experience,” Tyrell explains. “While this story is valid and important, it is merely one of many different narratives. I am not African-American. Thus, I work from a position slightly outside of that experience; I hope my images broaden the discussion about what it means to be black.”

Tyrell’s photographs challenge common assumptions about how race and class appear within the family portrait. Her seemingly upper-class white subjects are meticulously dressed and flawlessly composed, and yet their frozen expressions and stiff postures suggest that race and class can be performed for the camera.

It is not accidental that all of Tyrell’s figures stare directly into the camera. In fact, when she shoots her photographs, she purposefully positions the camera at waist level so that her figures can look slightly down upon the viewer.

“I want to co-opt a gaze that had been used in aristocratic art for centuries,” she says.

In one photograph, titled “Ismay, 44,” Tyrell pictures a woman in a white floral dress; her legs are crossed at her knees, and her lips are painted the perfect shade of red. Despite Ismay’s upper-crust composure, it is hard to identify whether she is supposed to black or white, passing or not, from present time or from the past. Tyrell explains that this ambiguity is the at core of her vision.

“My grandfather had a fair complexion,” she says. “If he had made the decision to shave his hair down and marry a different woman, he could have easily slipped into white society.Race and identity are not so cut and dry—we need to find new ways of talking about difference.”

Indeed, Tyrell’s subtle yet startling images encourage viewers to reconsider their assumptions about what it means to be black or white.