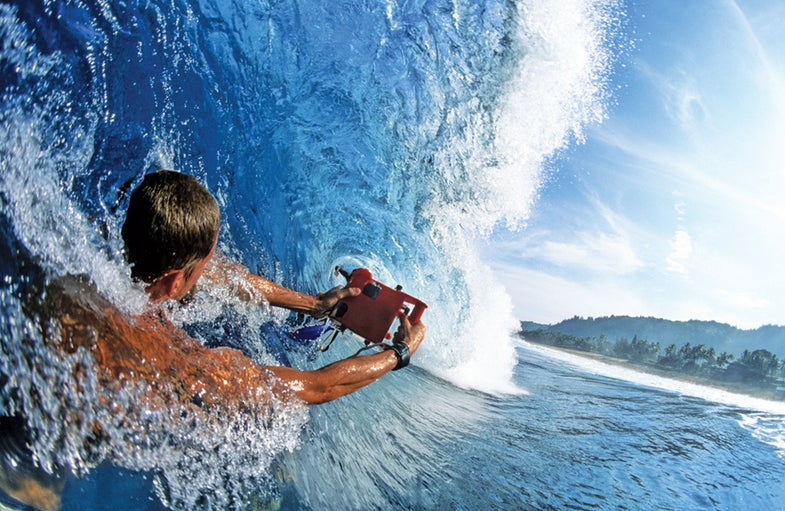 In surfing they call Oahu’s north shore the “Seven Mile Miracle.” It’s a one-of-a-kind geographic, oceanographic and meteorologic phenomenon. First, there’s the light. Hawaii is like a giant outdoor studio. Then there are the trade winds that blow just offshore year-round and the northern storm tracks that come down from the Aleutians and shoot straight at the island. Finally there’s the fact that Hawaii has no continental shelf to slow waves down before they reach the shore. When you put it all together, you get wind- and storm-fueled waves traveling through 5,000-foot depths and then suddenly, violently running into six-foot-deep coral reefs. That all happens about every 15 seconds, day in, day out, smack in the middle of one of the prettiest places on earth.

So it attracts some surfers. In fact, during November and December, when the three most prestigious surf events in the world happen there, pretty much every top surfer on the planet is out in the water on a daily basis. In the early 1970s, I was one of the few guys shooting the insane things going on there. Often I’d be the only photographer in the water. These days it’s a little different. During prime time it’s not uncommon to see as many as 20 guys out there, all working the same wave, all yelling at one another to get out of the shot. It’s the same thing you get on the red carpets in Hollywood or at the New York fashion shows, except with the photographers swimming to stay afloat while heaving 10 feet up or down every few seconds, and the celebrities they’re trying to shoot barreling toward them at 30 miles an hour down a liquid mountain—a mountain that’s collapsing on everyone involved. It can get a little intense.

While deaths are thankfully uncommon in our industry (though in 2005 Jon Mozo died while shooting at Pipeline, the North Shore’s most storied break), the ocean’s raw power is a constant threat, and it’s quite common to take a beating. In fact, it’s a near certainty if you don’t know precisely what you’re doing. Pipeline has a raging riptide that runs like a river along the edge of the beach. When you paddle out to take photos, you have to start way above the break because otherwise the riptide will drag you all the way down the beach in a second. Then you’ve still got to cross the Ehukai Sand Bar, a shallow area about a foot deep. It’s 100 yards down from where you paddle in, and if your timing is off and you cross it as a wave is hitting, you can get crushed, spun around or tossed into the air. Finally, remember that while you do this, you’re trying to keep a grip on $7,000 worth of equipment.

There are alternatives. You don’t have to shoot from the water. The up-close, wide-angle shot you get when you’re inside the curl with the surfer may be classic, but sometimes editors want to mix it up. At Pipeline, the surf breaks only 150 feet off the sand (most massive breaks, such as Mavericks in northern California or Black’s Beach in La Jolla, sit far offshore). So the beach is a perfectly fine place to get good zoom shots. It’s also a perfectly fine place to ruin your equipment. Along the beach, when really gigantic swells start approaching, the locals shout “Outside!” This warns everyone that there’s a big set of waves coming from “outside”—way out in the ocean. It basically signals that a lot of the dry parts of the beach are about to be wet.

I remember when these big-time ski photographers came out once to do a movie. They’d rented about $200,000 worth of film equipment but didn’t know the local lingo. After they’d been on the beach a little while, everyone started shouting, “Outside!” These guys had no idea what that meant. Next thing you know, five feet of white water shot up over the whole beach and all their gear was soaked. I saw them open up the film spool, and water just poured out of it. The moral: do your homework (in this case, keep your equipment either on your back or hooked up high on your tripod). These guys didn’t. It’s not the kind of mistake you repeat.

If you do shoot in the ocean, you’ve got to make sure you’re in top shape, feel confident in the water and know your equipment. Because when the waves aren’t pounding you into the sand, they’re turning you around and trying to rip your water housing out of your hand. In that situation you need to be strong enough to keep kicking through to calm water and comfortable enough in this environment not to panic when you get twisted around or shoved into a hole in the reef. And you need to know enough about your gear to not have wingnuts on your housing.

Now, this might not seem like a big deal. Wingnuts are convenient because you don’t need tools to open and close your housing when you want to make adjustments. But when you lose control of your rig in a big wave, those wingnuts go from convenient to dangerous in a hurry. I knew a photographer who was also a male model. One day he was shooting at Pipeline and got caught on the Ehukai Sand Bar. He lost his grip on his housing, it went flying around him underwater on its wrist-leash, and the wingnuts punched his face full of holes. Suffice to say he doesn’t model anymore.

Of course, in a situation like that you’re just as likely to smash your housing on the reef and destroy your equipment. Neither is fun, and neither is completely controllable. But you can’t let fear get to you. You do your homework, control what you can, and then put it all out of your mind. Once you’re in the water, your focus has to be 100 percent on shooting, because those 20 other guys out there with you want the exact same photo. You have to be assertive, even aggressive. Most of the guys in the scrum are best friends out of the water, but the stuff they yell at each other when they’re out in the waves ranges from politically incorrect to downright threatening.

Thankfully, once you get yourself into a good position, the shooting itself is a no-brainer. You just open it up paparazzi-style, as fast as the damn thing will go. When using a wide-angle, all your settings are in place before you get in the water; you just hold it up and get as many frames as you can while you’re hovering in the sweet spot of this giant force of nature with an athlete bearing down on you.

The guys who do this aren’t out there for the money. Which works out, since they don’t get paid much. For editorial shots, you can expect $20 to $50 for a web photo, $200 for a full-page magazine shot. The pay scale hasn’t changed much since 1968, when I got $25 for the first photo I published. That’s about 160 bucks today. You don’t get medical, you don’t get retirement. But between the beautiful women, the epic tubes and the travel, it’s an easy lifestyle to fall in love with. Standouts might get put on retainer with a magazine. Getting regular checks makes life easier, plus they pay for your travel.

Yet the competition out there has become ferocious in the past 10 years. In 1971 the photo editor at Surfer had five of us in his file. By 1981 there were about 150 names in there. About three years ago, there were 1,000. There could easily be 3,000 by now. And a lot of them are incredible artists. You used to get a lot of your stereotypical Spicoli types, but many of these new guys coming in have formal photography educations from Brooks Institute or Art Center in Pasadena. And that means they can shoot studio, fashion, action, sport, snowboard, skateboard and video. That versatility is important, because it means more ways to get paid. Clients love it if they can get catalog, advertising, action shots and web videos from one photographer. The really top guys work with the surf companies. The surf gear industry is an $8 billion-a-year business, so they’ve got some change to throw at good photos.

And for sure, when you’re in that top echelon, it’s an incredible fantasy world. You’re on a yacht with the top eight male and female surfers in the world headed to Indonesia with a chef and the full luxe deal. But it’s probably only 25 photographers in the world who get to work at that level. The rest of them are out at Pipeline, in the scrum, trying to keep their heads above water and get that killer angle so they can make rent in a house they probably share with a dozen other shooters. They’re surf photography’s mercenaries, and they put their lives (and their equipment) on the line every day to keep the waves of the industry rolling. AP