A deep dive into the photographer's 30 year career 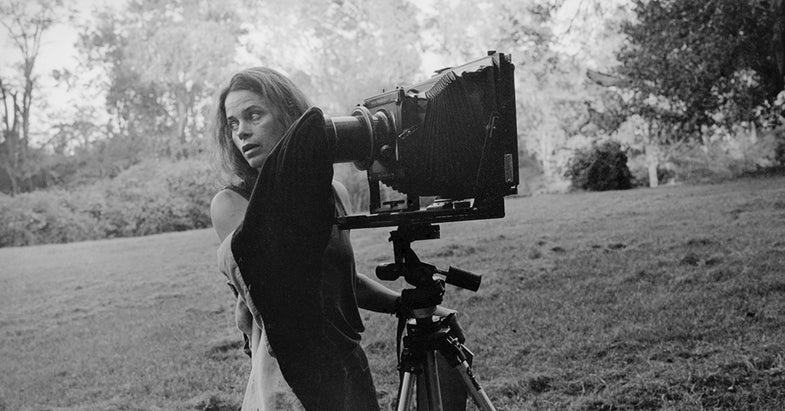 Sally Mann doesn’t believe in talent. She believes in hard work. The kind of work it takes to ride unruly horses, to hoist an 8×10 camera, to constantly fend off controversy, and to write an honest book about a complicated existence.

Hold Still, Mann’s recently released memoir, is culled from a collection of family documents and archival ephemera that had gone ignored in an attic for decades. During that time Mann created the work that would fill the pages of her influential monographs At Twelve, What Remains, Proud Flesh, and Immediate Family, among other projects that gracefully and provocatively confront the larger mysteries of life.

“Over the arc of my career I’ve tried to work in the quotidian, the everyday things, even when they are the big things like life and death and family, and make them revelatory and beautiful,” Mann said during a recent reading at Symphony Space on New York City’s Upper West Side. She has applied that vision, coupled with her back-breaking work ethic, to Hold Still, in which she uses the trinkets, toys, and crinkled correspondence of her and her family’s past to weave a rich and revealing story.

The book dives deep into the physical and emotional terrain that has informed much of the work she has produced over the past 30 years. The narrative moves through early childhood and her teenage years, with segues into her parent’s personal histories and a heartfelt exploration of her relationship with the Mann family’s black nanny.

Describing herself as a ‘near-feral’ child, raised by her family’s pack of boxer hounds, she recalls the first five years of her life, when she vehemently refused to wear ‘even a stitch of clothing.’ Among the attic treasures, and now reproduced in color photographs, are six dainty, hand sewn dresses, as pristine as the day a young Sally Mann likely cast them off to run wild and naked among the honeysuckles of a Virginia meadow.

An obsessive collector, Mann admitted to an enraptured audience that she had never questioned the motives behind the intense connections she has with objects, relics, and artifacts. Dog bones, baby teeth, and family photo albums are all equally worthy of preservation in Mann’s personal archives.

“Perfectionism, severe emotional attachment to inanimate objects, varying levels of anxiety, usually beginning in childhood with the saving of school papers and stubs of old pencils,” she said, reading from notes she’d taken on obsessive compulsive disorder—notes she pulled from the back pocket of her blue jeans, along with a tiny pencil stub.

“None of this seemed strange to me,” she said, despite author and moderator Ann Patchette’s repeated inquiries into her behavior, and her insistence on doing absolutely everything the hard way. “It’s like putting a lead handicap on a racehorse, but I’m saddled with self doubt,” she said, seeming to articulate the thoughts as they came to her on stage. “I don’t think that I’m so brilliant or that I’m the fastest horse and I need these handicaps so I don’t blow everyone else away. I guess I think that having all that extra weight and creating these obstacles for myself excuses me when I fail.”

Using antiquated equipment and caustic chemical processes, she says, is her safety net. Yet even from the sanctuary of her studio or the family farm in Lexington, Virginia, she’s still haunted by ceaseless criticism and scarred by rejection. But the ghosts Mann exhumes and interrogates in her memoir don’t respond to criticism, and don’t fall victim to rejection. They emerge from her fluid and rhythmic prose to defend what she called the “dignity of the work,” while resisting the urge to air grievances and spark new fires.

Sally Mann’s photography, and her motives behind it, will always be subjected to a certain knee-jerk, moral response, whether she’s photographing the scarred southern landscape or her children, running as free and feral as she did through countless summers. She has grown resilient, but she has not become bitter. The self doubt that has weighed her down has also given her a steadfast determination to keep hoisting the heavy camera for a chance at capturing a photo that she said could “make me want to drop to my knees in thanksgiving,” and those are the photos that have to be made the hard way.