“There is nothing sexier than having a sense of humor about yourself.” 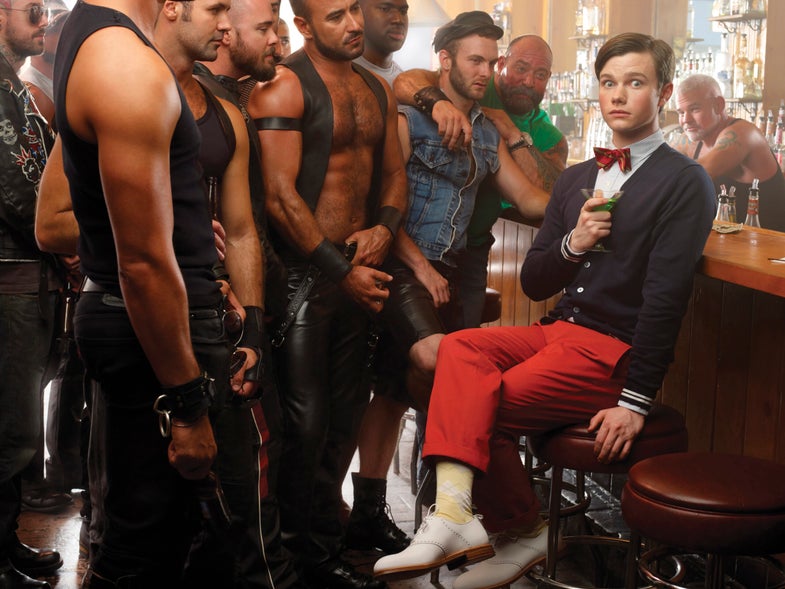 Photographer Robert Trachtenberg, who grew up in Hollywood, remembers standing in line to buy milk next to Cary Grant. With movies in his blood, he attended the American Film Institute with a plan to write, but got a job with a well-known celebrity photographer and soon decided to try photography himself. Needless to say, it worked out. His work has been collected in numerous books, the latest of which, Red-Blooded American Male, came out this fall. We talked to him about how he coaxes his famous male subjects into compromising—and yet somehow dignified—positions, and how editorial photography is changing. 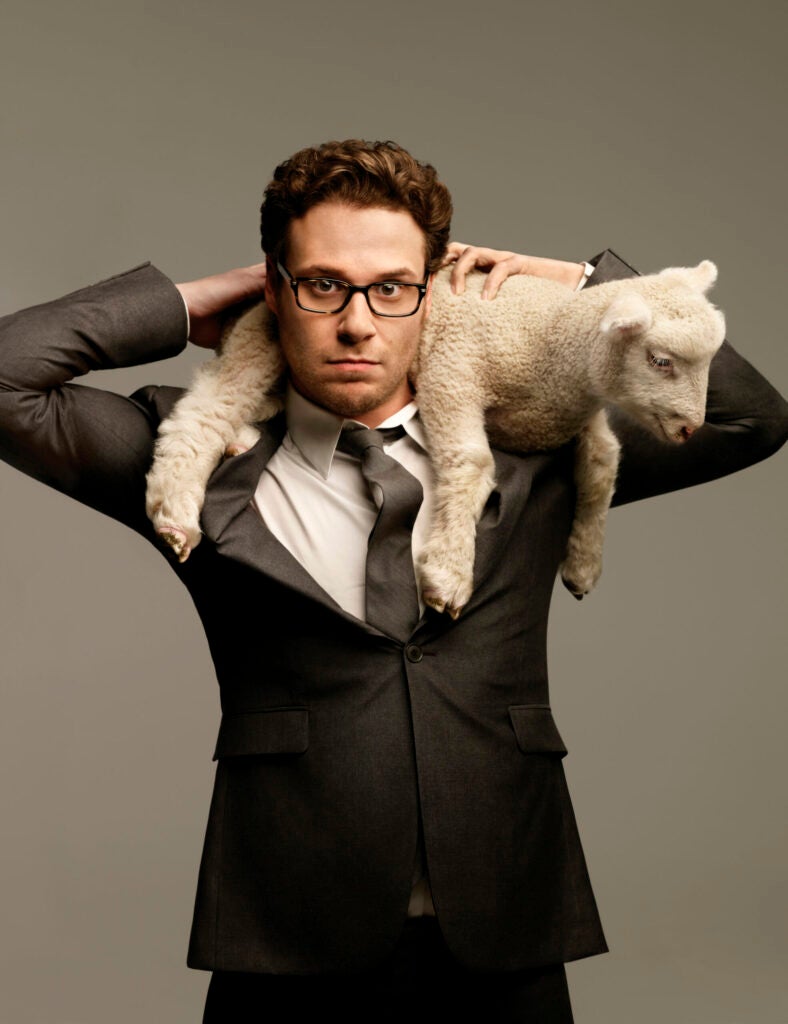 In your new book, you gather photos of men. I think it’s kind of special to spend time looking deeply at this many men; a lot of photography is about looking at women. Can you tell me about how you came to this idea?

I’m a commercial photographer and proud of it. This idea of going and shooting rodeo guys or the American west, all that sort of personal work, it’s been done. It’s been done really well. I don’t have anything that I could particularly add. But when you looked at my photographs of men as a group it became clear that I somehow managed to get these guys into nontraditional yet somehow compromised positions. They retain their dignity, but they’re kind of making fun of themselves at the same time. 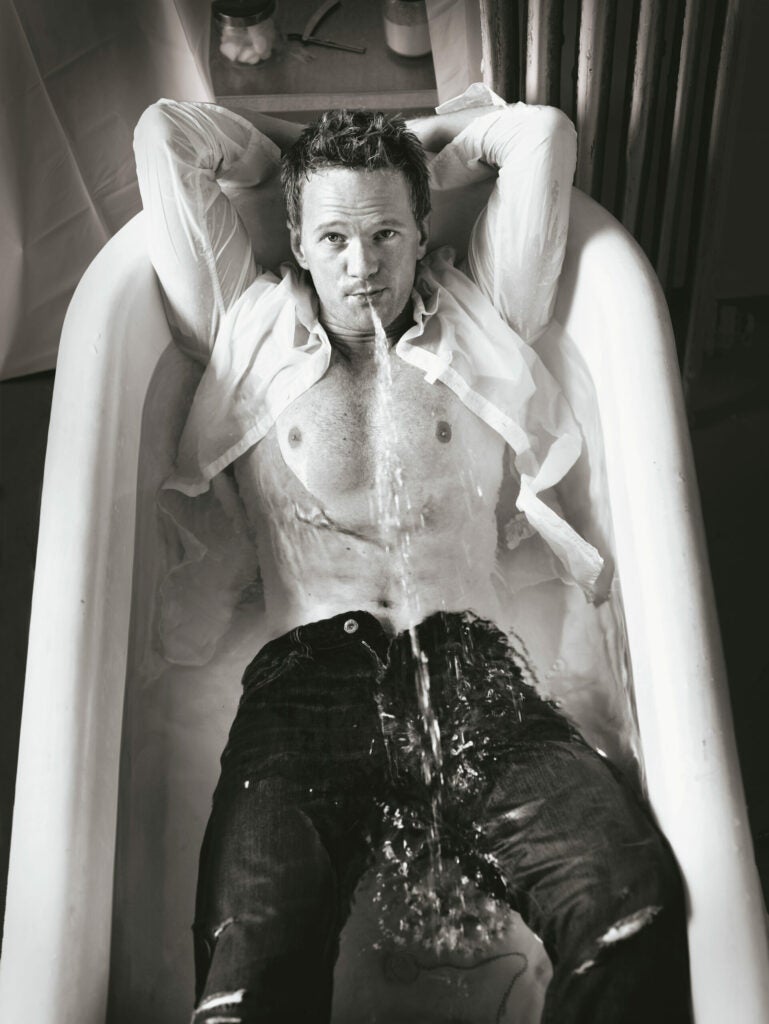 It’s a bit self-deprecating when you say oh, I’m a commercial photographer so I don’t need to do personal work. Is it possible that the personal work that you do is your commercial work?

Yeah, exactly. That’s a really good point—I get what I need from it. 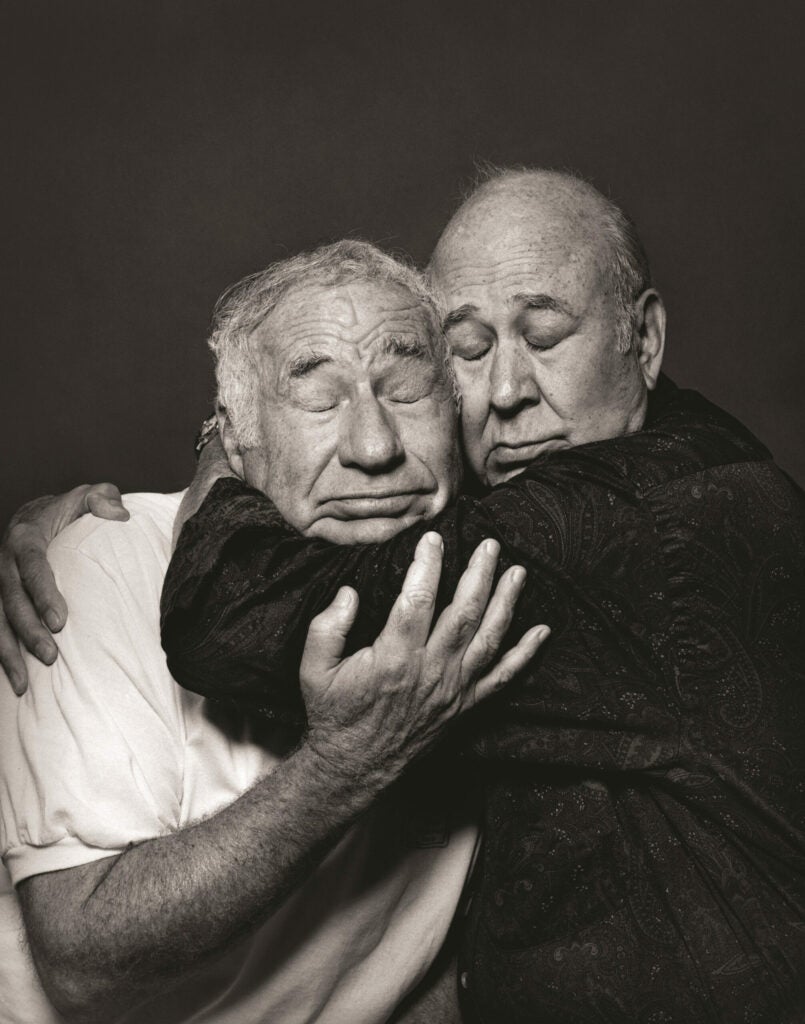 I think that although your pictures are less subversive now than they might have been 15 or 20 years ago, they still have a subversive edge. You wrote in the book that guys in women’s clothes who haven’t made it a conscious lifestyle choice will always be funny, period. But I don’t think that Will Arnet photo on the cover is working in quite that way. I don’t think it’s only funny. I think there’s something else going on there. I was curious what you thought about that picture.

Well that was just one of those great situations where everything comes together. That was a newly refurbished lounge area in the studio where I was shooting, with that wallpaper and that couch. It just so happened that we had that gray sweater and we had the fishnets. And Will is definitely operating on a different level than so many other comic actors. I don’t know how to describe it other than some people get it and some people don’t. He got it. He got the weirdness of it. 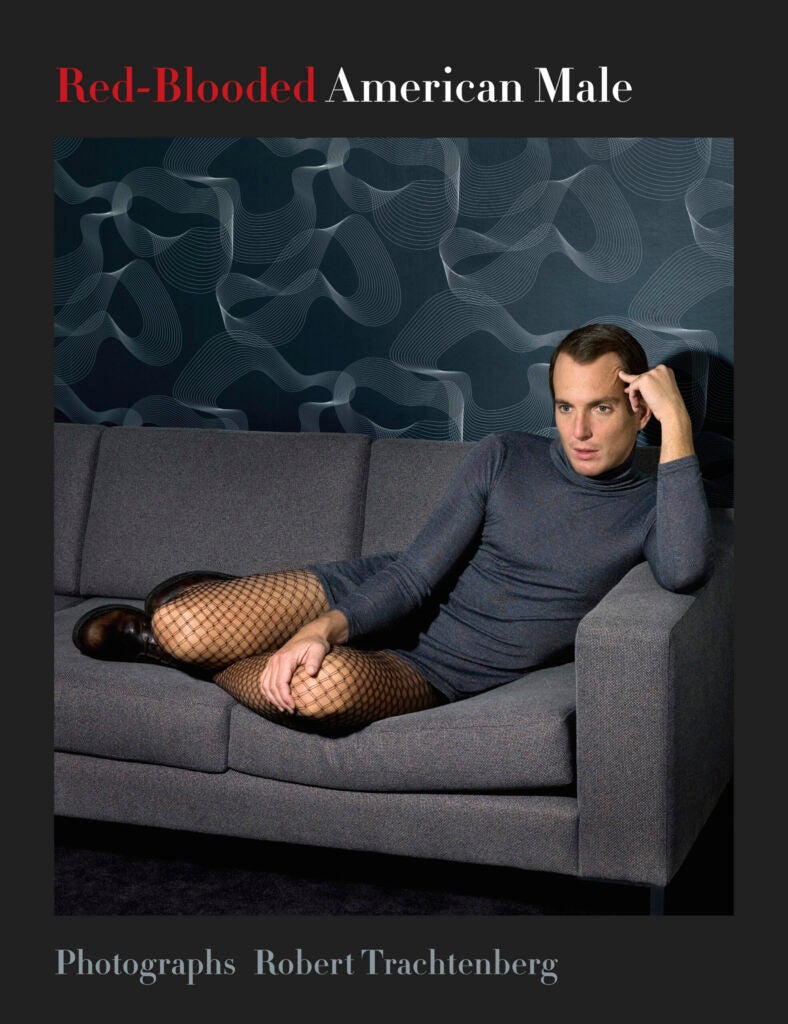 It’s such a perfect cover shot with the book’s title. Do you think the definition of red-blooded American male is expanding?

It’s completely expanding, which is why I was so interested in shooting some people specifically for the book. One was Aydian Dowling, a transgender man who was in the finals in a competition to be on the cover of Men’s Health magazine. At the end he won the reader’s poll, but the editors had the final decision and put someone else from the competition on the cover. But then they also did a cover with the five finalists and he was on it. He was the first transgender man to ever be on the cover of a major men’s health and fitness magazine. Look at him. He couldn’t be more quintessentially masculine. 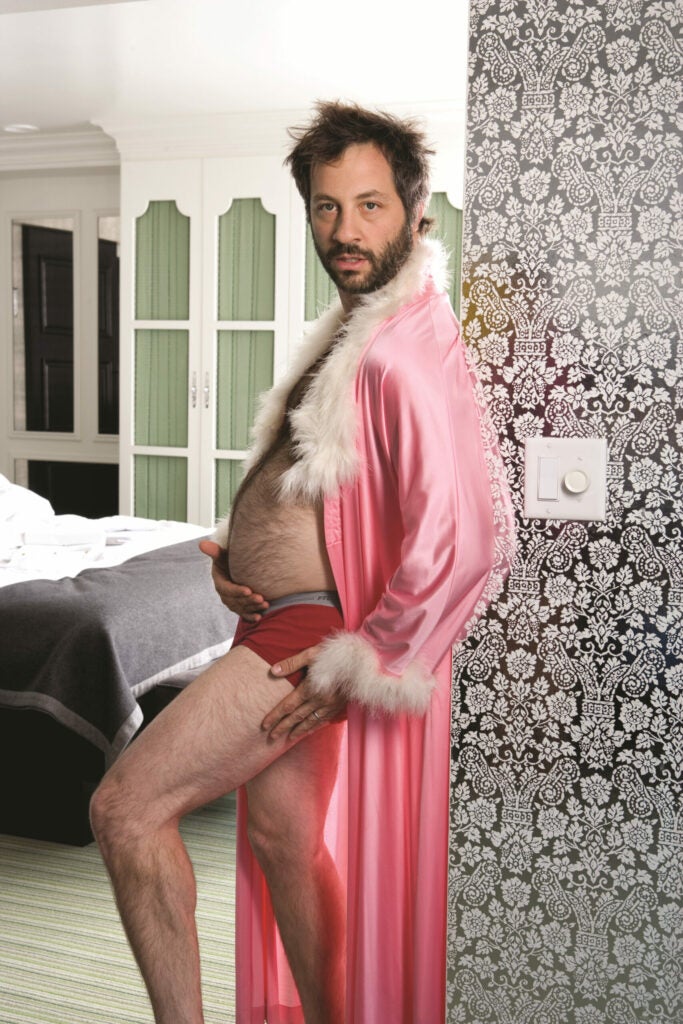 I shot quite a number of them for the book actually. I shot a veteran who had fought in Afghanistan too. So many servicemen who have lost limbs have been photographed just beautifully and heroically. When I spoke with Cameron Kerr, who lost the lower portion of his left leg, I think I initially said I wanted to shoot him getting a pedicure. I wanted to show that life goes on when you overcome that tragedy of losing a limb and the fact that you can have a sense of humor about it. There’s nothing sexier than having a sense of humor about yourself. These guys in this book overwhelmingly have a great sense of humor about themselves.

I really wanted the book to not just be a book of famous faces. It was really important to me that I tell the reader something about the shoots or the people in the photographs just to give it a little bit more dimension than just a book of photos. 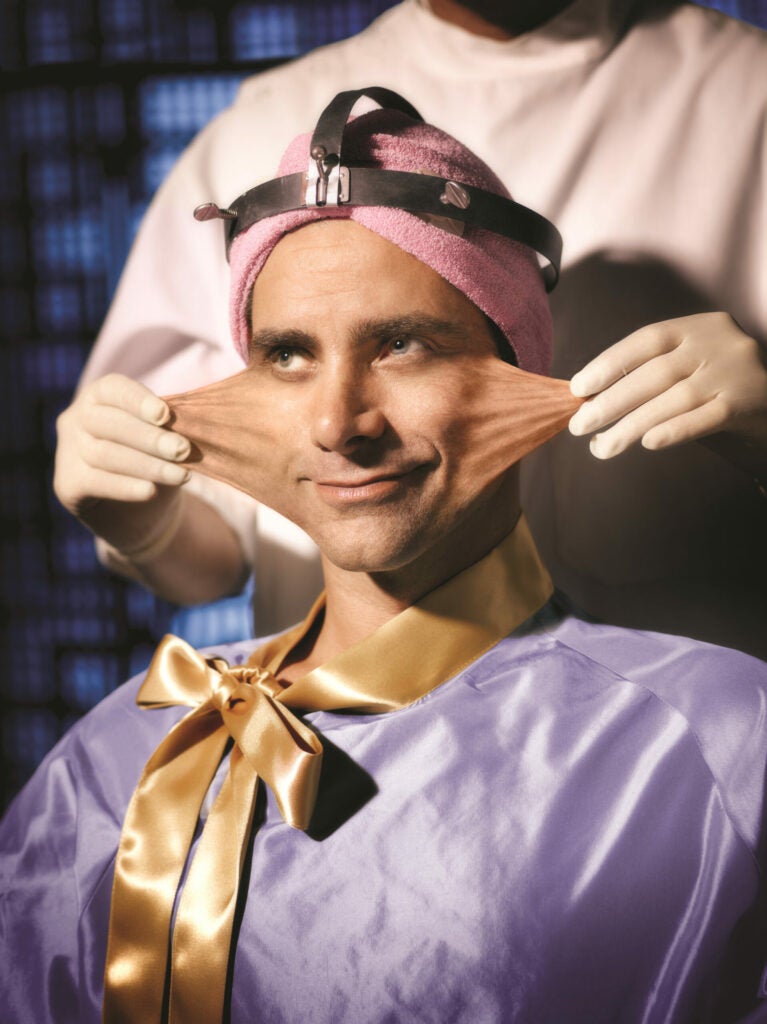 That picture of Chris Colfer [from Glee] at the Motherload bar in West Hollywood, was there controversy after that came out? Was there blowback?

Funny enough there wasn’t a controversy. The photo went viral for sure. It went very viral. That’s part of the fun of working for Rolling Stone, is you can do photos that you could do for almost no other magazine. 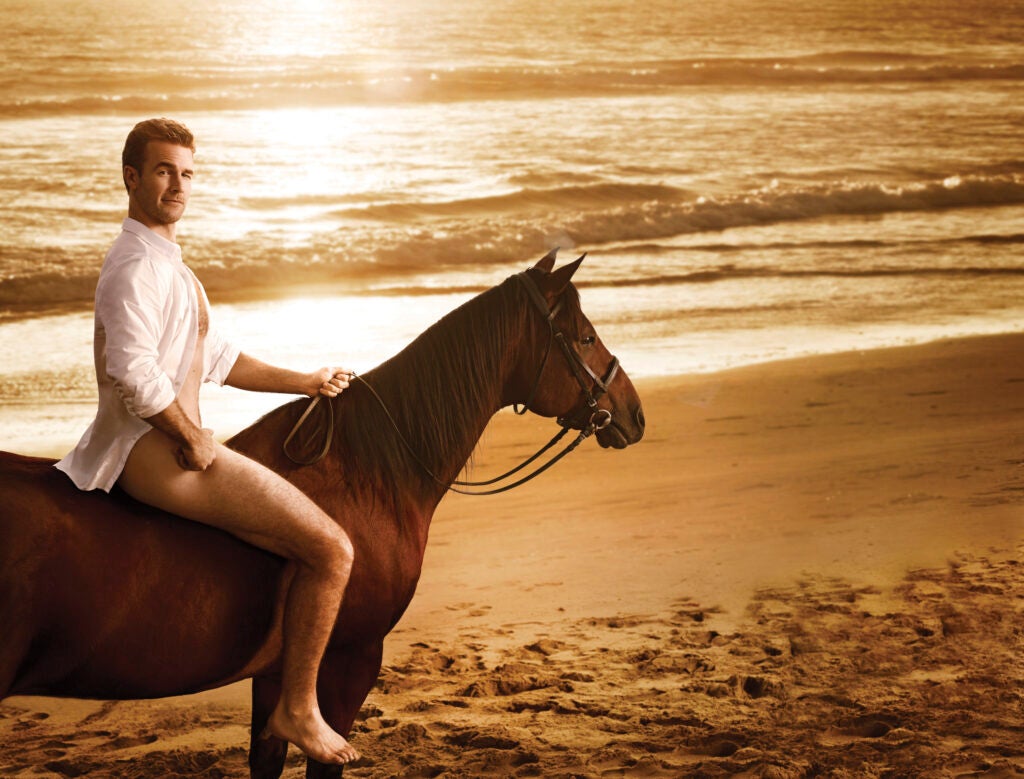 Where did the idea come from?

It’s that thing of taking the personality [an actor is] known for on whatever project they’re doing and bringing it to its next logical place. You take them out of the world of the show and put them in the real world. Chris’s character probably would’ve eventually gone to a gay bar. If he picked that particular gay bar that’s who the clientele would’ve been. Everybody makes mistakes. Sometimes you go into the wrong place. . . 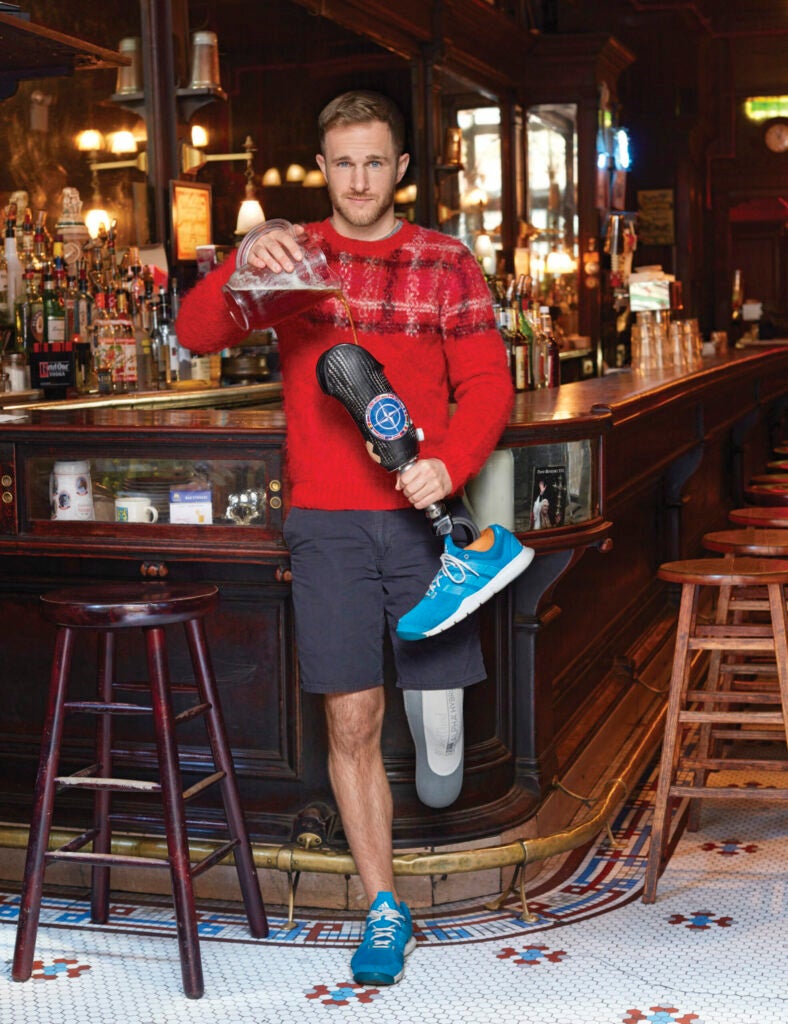 Speaking of viral images, how has celebrity editorial photography changed for you since the advent of the internet, instagram, the decline of print media, etc?

When I tell you that this is something that comes up every single week from people in every part of the business, I’m not exaggerating. It’s just this genie has been let out of the bottle and it’s never going to go back to the way that it was. Friends of mine who are in magazines have equated it to it’s the difference from horse and buggy to automotive. 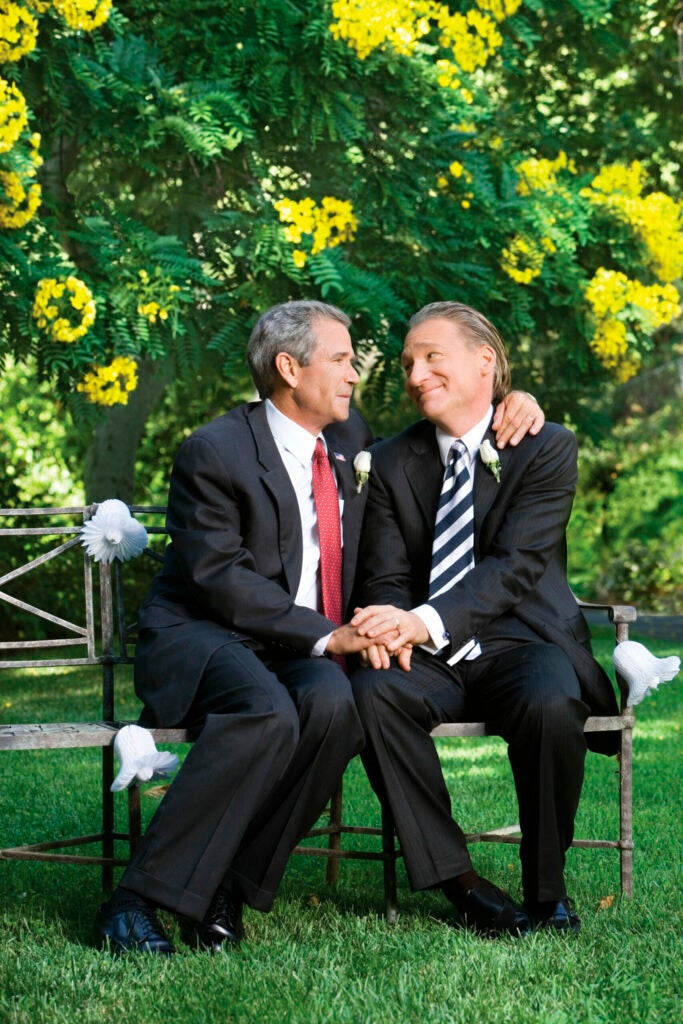 So much of the time with the celebrity work, the amount of time you have with them now is so limited. When I was working for that photographer at the start of my career, she had a studio in her home. Celebrities would come over. They’d have lunch. We’d sit down and hang out. Then they’d eventually go through the clothes. Then they’d eventually go into grooming or hair and makeup. Then you’d shoot for a while and then you’d stop and maybe you would eat a little more. It was like an all-day affair. Then something happened and it just turned into this machine where you have a half an hour. You have 20 minutes. You have an hour. They can’t come to you, you have to come to them. It has to be this. It has to be that. It changed radically. 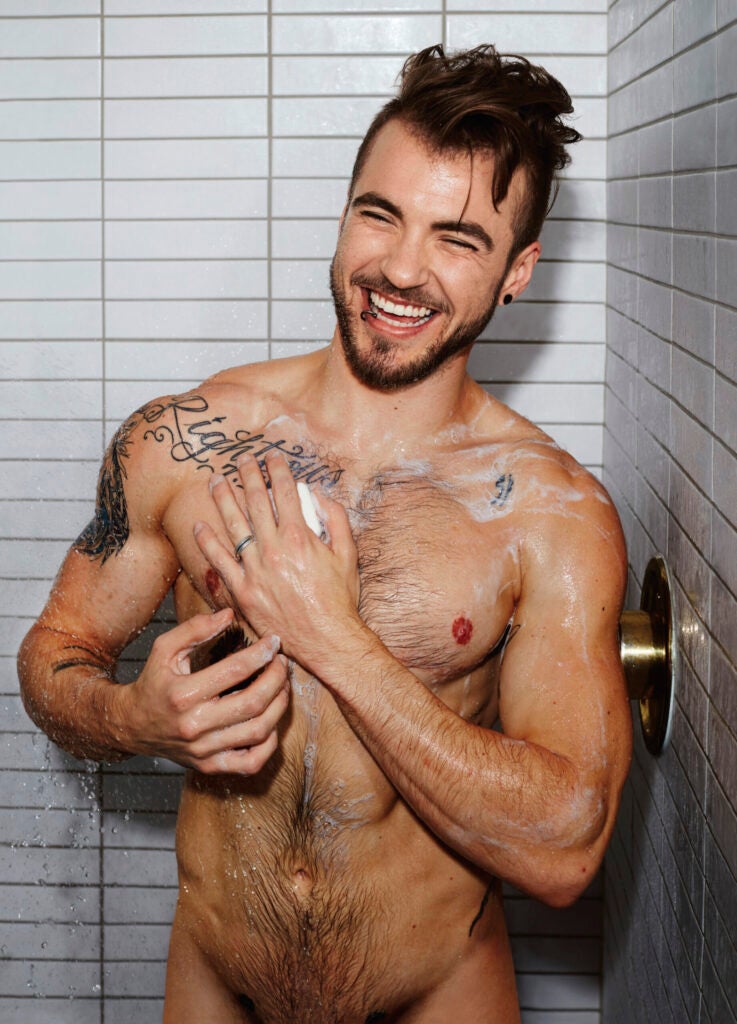 Yeah there have been so many changes in photography, not only in celebrity culture but also with the transition to digital photography.

My office used to be across the street from one of the biggest labs in LA. In busy seasons they’d be running film 24 hours-a-day. There would literally be hundreds of thousands of rolls of film on the counter, coming, going in different stages of being dropped off or picked up. Everybody was shooting and it was crazy. You just think of all the chemicals and all the plastic and all the sleeving and cutting. It was unbelievable. 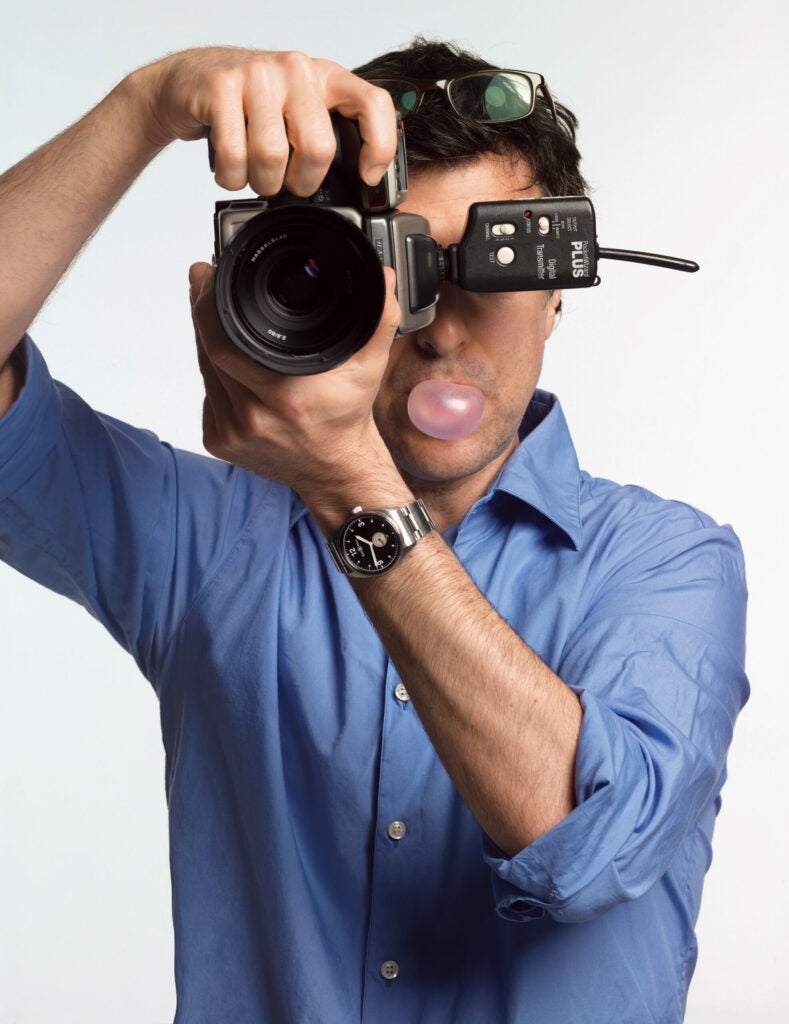 The fact that all that is sort of gone is terrific. It’s a much cleaner process now, but Bruce Weber had this great quote years ago where he said going to the lab to look at your snips, it was kind of like Christmas. Like opening a gift on Christmas morning. I’m paraphrasing.

Now it all comes up instantly. I think the big difference is that even before with Polaroid, everybody would look at a Polaroid, stand around and stare and it and then you’d just start shooting and that was it. They’d sign off on the Polaroid and then you’d just go. The rest of it was a bit of a mystery. The mystery’s kind of gone because everyone is now hovering around the monitor and they’re kind of quick to judge. You’re shooting so much more than you would as if you were shooting film. It’s free essentially. You’re just going and going.

Probably the only plus side of doing digital is if you’re trying to do a funny photo and you just hear laughs behind you then you know you’re on the right track!