Robert Polidori started his career in motion pictures, and his renowned photography still retains a cinematic quality. Often on assignment... 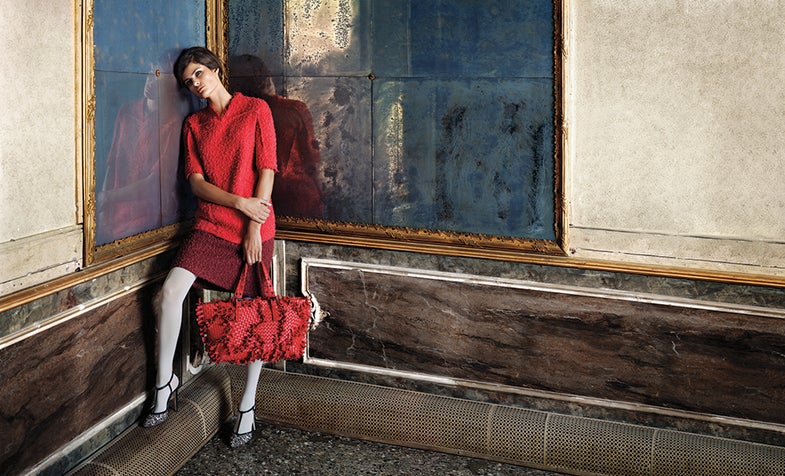 Robert Polidori started his career in motion pictures, and his renowned photography still retains a cinematic quality. Often on assignment for publications including The New Yorker and_ Vanity Fair,_ Polidori has documented scenes ranging from disaster—such as the aftermath of Hurricane Katrina—to grandeur, such as his ongoing, three-decade study of the restoration of the Château de Versailles. Here he talks with American Photo about the philosophy and methods behind his visual mastery.

_You may be best known for your photographs of interior spaces. What appeals to you about those subjects? _

Thanks for not saying that I’m an architectural photographer, because I always get thrown in that category. It’s true, I’ve photographed a lot of interiors and a lot of buildings, but believe it or not, I consider them portraiture. Architectural photography is like product photography. You’re taking pictures of buildings—basically they’re product shots. I would say most architects like to see their work represented like virgins. Unused. Devoid of people or traces of people. I’m interested in what I would call more habitat photography, that is, the ways people use architecture and what traces such use, over time, leaves behind. For me, it’s a kind of psychological, or socioeconomic, sociopolitical, socio-psychic portraiture.

So you’re looking at the psychology of place?

Of place and time—it’s history that I am trying to serve. There’s the Freudian concept of the superego. [It has a role in] the way people wear clothes, who they think they are, or who they want to be. It’s the same with the interiors that they inhabit. Living takes place over time.

When I made a transition many years ago from cinematography to still photography, it was because I was highly influenced by a book that I read called The Art of Memory, by Francis Yates, about ancient memory systems. The room represents to me the psychic state of the inhabitants.

And even in still photographs you can see how those states change over time.

It sounds like Versailles, which is not only a former residence but now a museum of history, is an ideal place for such a study.

I was interested in Versailles because it was patently made for the kind of time studies that I wanted to do. I have some photos where you see behind the fabrics that are on a wall. You see different stratas simultaneously. That’s a way of seeing time. [Carl] Jung did this thing, what he called the collective…

Yes. Then I do a twist on it. I call it the collective superego. History is defined by experts, historians, academics, people who decide for the culture what that culture was and thinks that it is and thinks that it should be going toward. It’s collective there. In my view, every culture finds periods in the past which it likes, which it has resonances with, and other periods which it doesn’t. These change over time, the way fashion does. In a place like Versailles—which existed as a seat of government for more than a century and a half—a lot of fashion and a lot of history have gone by. And they’re constantly remaking rooms the way they were at a certain time period.

I’ve been working there 30 years. Even in a single decade, they’ll accent this more than that. This is what I call historical revisionism. Not in the way that’s used by Nazi war crime deniers. I mean simply what the two words say: You’re re-visioning history.

When you restore something, what does that mean, to restore? Is it to make something that once existed look brand new again? Or is it to keep it like a—not to sound vulgar—like a mummified cadaver? Or is it a composite view of time, taking aspects of the way that it looks now and in the past, but never simultaneously that way? It’s a composite. Those time processes are sociologically rich for me.

What role does large-format photography play in your attempts to answer those questions for yourself?

I think that’s twofold: resolution, and what I call the grammar of pictorial representation. I think the picture should almost look better than the thing itself, or else why bother to go through the whole thing of taking the picture? You should just go and look at it then. I’m not big on the snapshot thing, though I understand snapshots can imprint a very fleeting moment. These are not without value, don’t misunderstand me.

When it comes to other kinds of documents, I like to examine them. Having them be higher res, as the expression is now, to me is more satisfying. They just lend themselves to better scrutiny.

Two, view cameras afford one perspective correction. For me, proper view camera manipulations are like proper grammar. I try to take the picture in a certain way that it communicates and is referential. In that way, I think of myself also as an iconographer. I make icons.

In nonrepresentational art, say, those drips and stuff, they’re not representing any other thing except the actual paint. That kind of stuff to me is of limited interest, but regardless, I think objectively it’s a nonrepresentational icon. What interests me in photography is its referential nature. Though there are certain photographers, especially in the last decade, who are making non-referential types of images, what interests me is the language of images themselves. Certain images seem to have more meaning or psychological, psychic content than others.

_How do your recent photographs of the slums of Mumbai and Rio de Janeiro function as icons? _

I’m attracted to the kinds of things that aren’t going to exist much longer. To me, they’re the ones most deserving of being recorded. Over time I started seeing human habitats as nesting phenomena. These dense types of cities superficially look like seabird rookeries. Then there seem to be two prevalent yet opposing ways that cities are made. One is the pre-planned one, and the other is what they call in French un cité sauvage. They just crop up wild with no plan. Need made it.

One of the things that I find interesting about these wild cities is that they’re actually highly individualized. Each apartment in the new highrises in these areas is nearly identical. But the interiors are much more individualized than the upper middle class homes, which seem to be almost identical. I noticed this also in New Orleans after [Hurricane] Katrina. I used to think that one of the main advantages of wealth was the capacity to individualize one’s life trajectory. That still may be true. But visually it’s a different story.

Because in wealthier homes people are decorating from the same big brands?

Yeah. I found that amazing. I came to realize that these poor dwellings were psychologically or psychically more rich. Whereas the more wealthy ones, they were more purchasing a persona, or adopting rather than springing forth from the psyche. That’s my point of view. I could, of course, be wrong there.

We talked about decay and change in your work. In the slum communities, which are so crowded with disparate objects, do you see growth or decay?

Decay comes with time. It shows traces of time. Totally new stuff, to me, is more boring because it doesn’t show much time.

Earlier, you mentioned that you don’t consider fashion to be art. It’s more product.

Pathos is where things get messy.

It is the affirmation that life is not infinite. That life is tragedy. This, they never admit. But all great beautiful models do end up in death. All those clothes will end up ripped.

_How did the Bottega Veneta project come about? _

That’s just a fluke. It happened because Tomas Maier happens to use artists for his campaigns. Most big fashion campaigns are made by maybe the same five to ten photographers.

It was shot at the Palazzo Papadopoli, in Venice—how did you end up in a venue so well suited to your aesthetic?

They wanted me first to shoot it in a theater, but there were only one or two possible contexts there, so I asked for a location with more possibilities. I based the psychological state that I wanted to project on [Michaelangelo] Antonioni movies, like L’Avventura. Also, each of the models had a different sense of time. So I shot the background, then I would shoot her, and then him, and then composite the images together. Technically, it was easier to shoot them separately. I like the ones where he’s close up and she’s further back, and it’s focused on both, with almost perfect depth of field. It’s an idealized point of view. This is what the eye thinks it sees. Ultimately, I’m interested in what we perceive. When you want to be an iconographer, you have to understand how the brain perceives it, not just the eye.