Last year, Richard Mosse’s surreal portrait of the Congo, Infra, was listed among our best photo books of the year.... 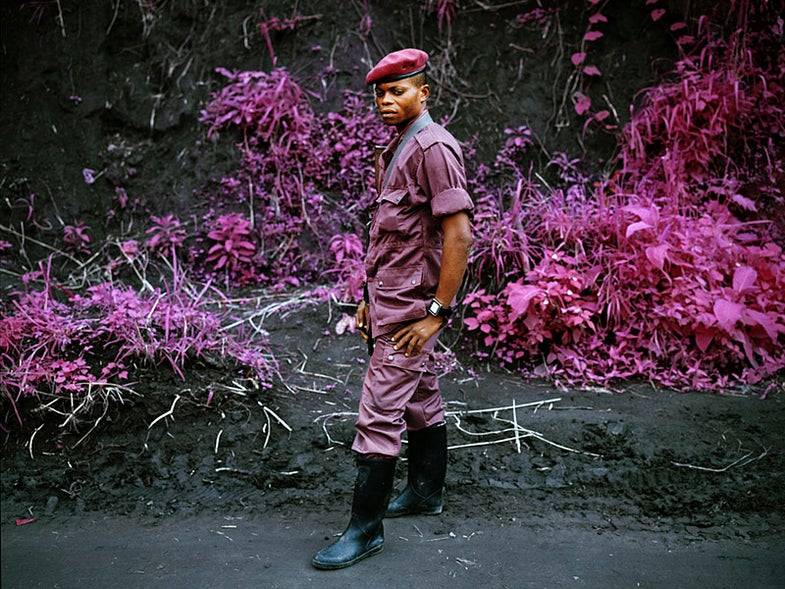 Last year, Richard Mosse’s surreal portrait of the Congo, Infra, was listed among our best photo books of the year. As he’s done with many of his projects abroad, Mosse is now releasing an accompanying film, The Enclave, also shot on infrared stock. The multi-screen work just debuted at the Biennale di Venezia, and Frieze magazine has produced a behind-the-scenes documentary where we can get a sneak peak:

The infrared effect on 16mm is stunning, and the end result undeniably captivating visually. And Mosse’s intention, to reveal the atrocities of violence and war in the Congo that are completely beneath the radar of most western medias, is laudable. The idea that the work creates two simultaneous “reveals”—that of the under-reported violence, as well as the wild infrared color palette unseen by the naked eye—is an interesting metaphor.

But my reaction to this work, both in the original photographs and now on film, has always been one of confusion. If the goal is to create empathy among the rest of the world for this place where atrocities are so common, why resort to a visual technique that casts the country and its people in a completely alien light? Africa has long been portrayed by outsiders as a land of the exotic, the strange, and the deeply unfamiliar. The wild pink world captured on Mosse’s infrared film takes this tradition to the extreme, and while the effect is undeniably striking, it’s hard for me to see how this supports the stated goal.

“Beauty is one of the mainlines to make people feel something. It’s the sharpest tool in the box,” Mosse says in the Frieze short. “If you’re trying to make people feel something, if you’re able to make it beautiful, then they’ll sit up and listen. And often if you make something that’s derived from human suffering or war, if you represent that with beauty (and sometimes it is beautiful) that creates an ethical problem in the viewer’s mind. Then they can be confused and angry and disoriented, and this is great, because you’ve got them to actually think about the act of perception, and how this imagery is produced and consumed.”

Well, ok. But I would argue that that moment of confusion or anger can take another form—not just a paradox of perception, but one of actual confusion as to what these photos are trying to say about the Congo and its people. Are they humans on Earth just like us, deserving of our empathy? Of course they are—and that is ultimately what Mosse is trying to communicate, and he should be praised for that. But by placing the people of the Congo against a backdrop bordering on absurdity in its visual unfamiliarity, the work for me ultimately does the opposite of humanizing its subjects, no matter how surprisingly beautiful the visuals may be. 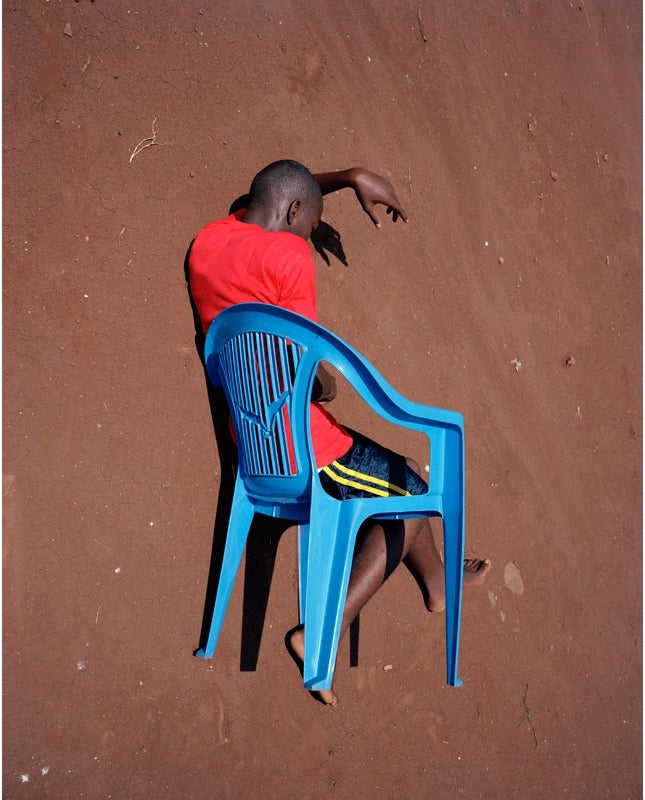 In thinking about this, the work of Vivianne Sassen also came to mind. Sassen was born in the Netherlands, but spent three years as a young girl living in Kenya with her family. In her photographs, she also depicts a dreamy, slightly surreal Africa, channeling her formative years there on subsequent return visits as a photographer. Obviously these two works are coming at two very different facets of life in Africa, with very different sets of goals and intentions. But where Mosse’s work is alien in the extreme, Sassen’s own brand of surreality comes across to me as exceptionally human, her photographs the fragments of memories and dreams we all can relate to from childhood. This is an Africa we’re not used to seeing in western art—one of subtlety, nuance, and humanity. One that Mosse’s work ultimately, I think, fails to deliver.

[via It’s Nice That]