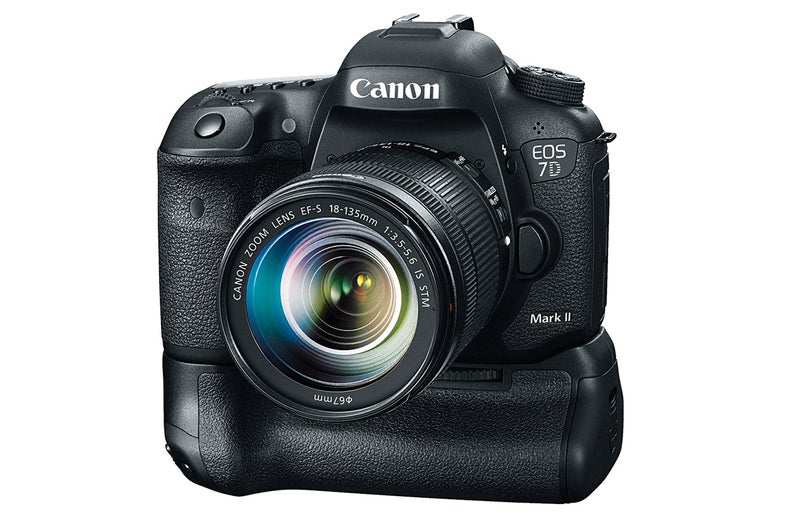 It seemed to take a dog’s age, but Canon updated, and improved on, the popular EOS 7D, its top-of-the-line APS-C model. The new EOS 7D Mark II logs only a minor increase in the megapixel count, to 20.2MP from 18MP, but the new sensor brings with it Canon’s Dual Pixel CMOS autofocus system, which puts focusing and imaging capabilities on the same chip. The result: fast, smooth, continuous AF when shooting in live view or capturing video.

Canon also overhauled the camera’s traditional phase-detect AF system. On the 7D Mark II, this jumps to a 65-point, all cross-type setup that covers a wider portion of the frame than the 7D’s 19-point system did. The new AF system is also rated effective down to the near-dark of EV –3 and boasts a dual-cross sensor in the center when using an f/2.8 or faster lens. That center point remains functional as a single cross-type at f/8, allowing the use of teleconverters in situations that would normally rule out autofocus.

The burst rate steps up to 10 frames per second from 8 fps while also capturing more shots before the buffer fills. When it comes to JPEG capture, that’s a huge increase: The original 7D could capture an impressive 130 large, fine JPEGs, but the 7D Mark II can pull in 1090 at the same quality level. When capturing RAW, there’s a more modest increase, to 31 frames from 25. The body remains tough, built from lightweight yet rugged magnesium alloy, and it’s weather sealed to resist water and dust.

While the camera’s built-in GPS might come in handy in some situations, we were surprised that Canon didn’t include built-in Wi-Fi. Similarly, given that the 7D Mark II can capture video at up to 1920x1080p 60 fps, it seems odd that it has only a fixed 3-inch 1.04 million–dot LCD rather than an articulated touchscreen.

Overall, the 7D Mark II is a significant step up from its predecessor. In the brief time we’ve had to shoot with it, we’ve found it comfortable to use and powerful enough to capture tough-to-get shots. If you’re invested in Canon’s EF-S glass (or Canon-mount optics from a third-party maker), this is the best body you can find for it.