Reuters and The New York Times share a 2016 photography Pulitzer 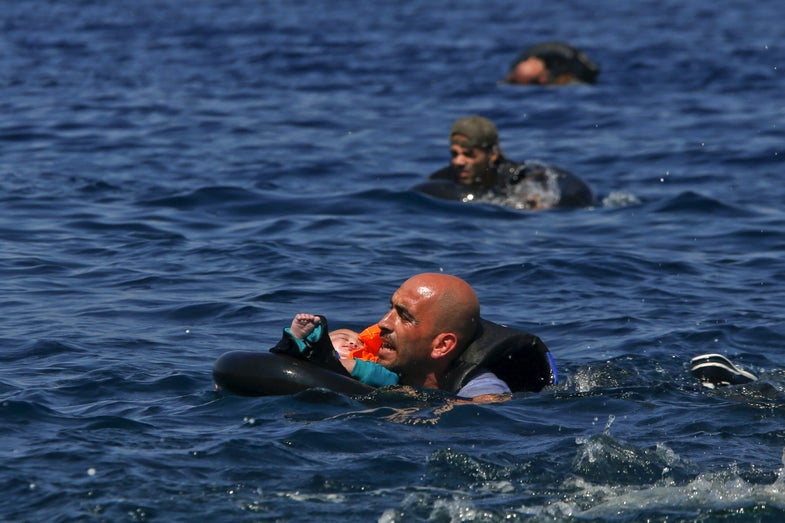 A Syrian refugee holding a baby in a life tube swims towards the shore after their dinghy deflated some 100m away before reaching the Greek island of Lesbos, September 13, 2015. Reuters and The New York Times shared the Pulitzer Prize for breaking news photography for images of the migrant crisis in Europe and the Middle East. REUTERS/Alkis Konstantinidis TPX IMAGES OF THE DAY - RTX2AJKA © Reuters Photographer / Reuter
SHARE

Europe’s refugee crisis has been one of the biggest new stories of the past year with a number of photojournalists churning out heart wrenching images from the field. Unsurprisingly, the coverage of this far-reaching issue picked up accolades from the 2016 Pulitzers. Photojournalists from Reuters and The New York Times shared the 2016 Pulitzer Prize for Breaking News Photography for coverage of the European and Middle Eastern refugee crisis.

“We are incredibly proud of the team for its outstanding work covering this historic and emotional journey,” Stephen J. Adler, editor-in-chief of Reuters, said in a press release. “The migrant crisis has been cast as a test of unity for Europe. While it is certainly that, it is also the desperate flight from war and danger by more than a million individuals. The team depicted that flight with humanity and respect of the highest order.”

Speaking to The New York Times Lens blog, David Furst, international picture editor at the Times said, “What makes this entry so important is it really gives the full arc of mass migration and shows the individual suffering. These photographers deserve a tremendous amount of credit.”

Additional photographic Pulitzers were picked up by The Associated Press for their series “Seafood From Slaves,” and Jessica Rinaldi of The Boston Globe for her feature on a young boy living in poverty in Maine.