Tender and unflinching family photographs made public for the first time 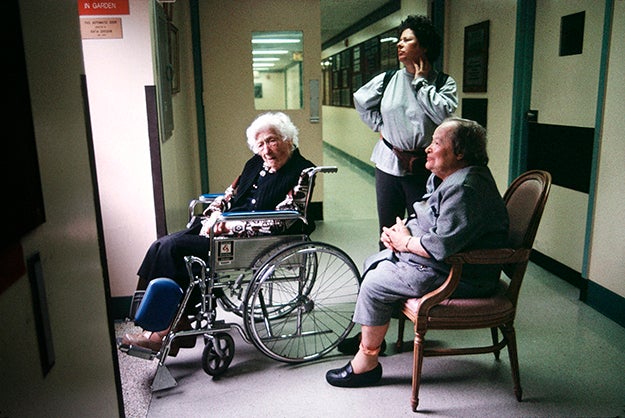 Back when I was in college, when photographer Arlene Gottfried‘s career was in its early years and mine hadn’t begun, I got my first job as Gottfried’s intern. It was unpaid (though she covered subway tokens), and once a week I’d take two trains down from the Upper West Side and across town to Gottfried’s old apartment in the East Village, in Stuyvesant Town. We’d sit in the small darkened second bedroom of her apartment and look at slides. We’d look at her street portraits, and her then recent work on the gospel choirs she documented and sang in. Occasionally we’d come to an image of one of her family members, and I’d glimpse an old woman in a hospital bed, or a portrait of what looked like Gottfried (it was her sister). The images seemed deeply personal and possibly heartbreaking—we never lingered long on them.

Now, they are about to become a book. Entitled Mommie, the book comes out this December from PowerHouse, and is an intimate look at three generations of mothers in her family: her grandmother, her mother, and her sister.

“I wanted to publish it to show the family’s journey: my mother’s illness and my grandmother’s passing and my sister’s choice to have a child later in life so that the family would continue,” Gottfried told me in an interview this week.

The pictures begin in 1972; the earliest, a color photo of her father that Gottfried says is the only color one she ever took of him. Gottfried describes herself as shy, but her work is fearless. She agreed to share six images with us that span the book’s timeframe, and give a sense of the story that Mommie will tell. We are grateful to have them, and can’t wait to see the rest.

There’s an IndieGoGo campaign that runs until July 31, 2015 to raise money to cover the book’s boards with real upholstery fabric. Go there to contribute and get one of the limited edition copies. Plus, watch a short video on Gottfried’s work (and hear her sing!).