Portraits Before and After the Fight

I’ve always loved before-and-after-photos, and their ability to take photography’s strengths as a storytelling medium to the extreme. As viewers,... 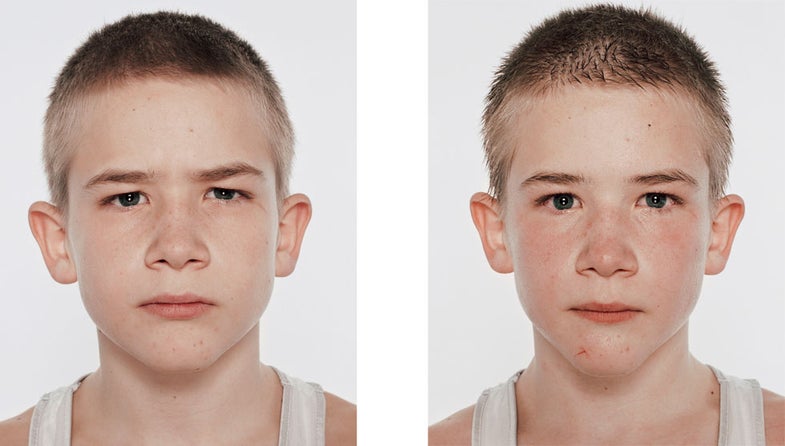 I’ve always loved before-and-after-photos, and their ability to take photography’s strengths as a storytelling medium to the extreme. As viewers, we’re well-accustomed to the drill: in between the two single moments depicted, we’re supposed to infer some sort of action that caused a visible change or transformation. Whether the photo pair is advertising a weight-loss drug on late-night TV, documenting an architectural renovation of a building, or telling us a more nuanced story as part of a fine-art project, the two photos are not always notable in and of themselves–their sole task is to communicate what happens in between, outside of the viewer’s vision.

This, of course, makes the before-and-after photo fraught with all sorts of opportunities for narrative creativity, deception, or even fraud. With all of the action happening behind the scenes in between the two photos, the photographer can tell a wide range of stories. And we the viewers often have the exciting opportunity to imagine and craft these unseen stories ourselves.

Recently, a handful of projects have caught my eye that use the before-and-after portrait to tell stories of violence. Several months ago I ran across the work of Nicolai Howalt, a Danish photographer. For his project and book, 141 Boxers, Howalt photographed teenage amateur boxers in Denmark immediately before and after their first entry into the ring. Each portrait is made in direct light with a neutral background, and when they’re displayed in a grid on a gallery wall, they form a massive typology of young fighters—their developing game-faces clean and composed on the left, bludgeoned and sweaty on the right. They’re striking not just in the transformations that occur, but in the subtle variations that can be seen across each fighter (you can see more on Howalt’s site here). Did this boy win the fight? Did he lose? Is he proud? Terrified? There’s also a menacing element to this work, and a certain Aryan creepiness factor at play when the viewer is confronted with a wall of overwhelmingly blond and blue-eyed youths, all of whom have just participated in a violent act we’re more likely to associate with grown-ups.

Since I first saw Howalt’s work, I’ve noticed several other projects based on before-and-after photos where the “middle” story is one concerning violence. The American photographer Kevin Lynch has taken an approach similar to Howalt’s with his portraits of the professional mixed-martial-arts fighters of the UFC. In Lynch’s before-and-afters, everything is maximized to absurdly comic proportions: the fighters’ bodies (huge), the portrait’s conditions (dramatic lighting, cheesy backdrops), and the damage done in between photos (extreme, brutal). Lynch also hangs these photos together in large grids, amplifying the effect further. You can find some of these works buried within Lynch’s Flash portfolio site here. 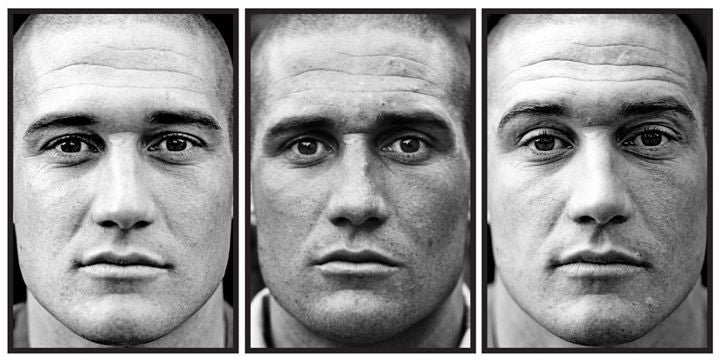 Two other photographers have taken a related approach with before-and-after portraits of soldiers deployed in Iraq and Afghanistan. In Claire Felicie’s “Marked” and Lalage Snow’s “We Are The Not Dead,” a third portrait is added, taken during the soldiers’ deployment (Felicie photographs Dutch soldiers, Snow the British). As Snow’s title implies, for most of the soldiers we see, their exposure to violence is less direct than Howalt’s young boxers or Lynch’s cartoonish warriors. The unseen story we’re meant to create looking into these faces, even when aided by the middle photograph, is perhaps more subtle, but no less powerful.

Felicie is currently raising funds to turn her “Here Are The Young Men” project into a book; you can find out more here. I’m sure there are more projects that follow this convention, and I’d love to see them. Please give us a shout on Twitter or in the comments if anything similar comes to mind.