When I saw Jin Zhu’s striking photograph of Monument Valley on Tumblr, I was more than intrigued enough to click... 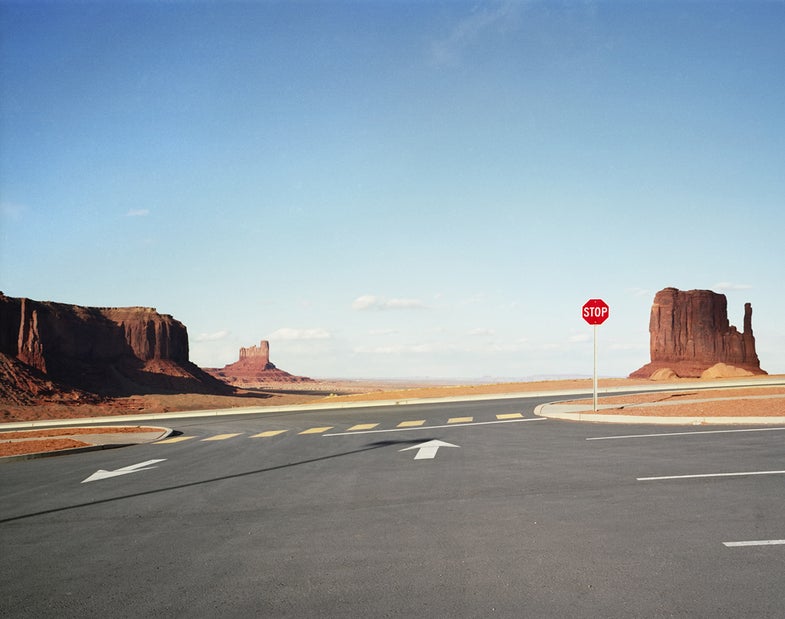 When I saw Jin Zhu’s striking photograph of Monument Valley on Tumblr, I was more than intrigued enough to click through to her website, the curiously named killeryellow.com. I then realized that she is not only working on a project about the American West, but she’s also documented the culture of Stanford’s radio station, KZSU. This struck a chord with me, for a couple of reasons: I was once a late-night college radio DJ myself, and I’ve also been listening to KZSU since my high school days. I sent Jin a few questions by email, to see what’s motivating her projects, and to unlock the mystery of “Killer Yellow.”

What are you trying to say with “Endless Stream”?
I became interested in water issues in the American West while driving the long stretch of highway between Southern and Northern California a few years ago. It was the first time I’d really thought about what the Central Valley is, and about how much we’ve changed the landscape of this area from a desert into farmland. I’m interested in our mania for relocating civilization to the perfect, ideal spot, but then changing it. We have a tendency to say, “look at this beautiful place!” followed quickly by “let’s improve on it, let’s develop it, let’s package it.”

When a photograph shows a scene on a human scale, I think people feel less detached, and see it as more habitable. The experience of viewing a photograph is like leaning forward to get a closer look at something in the real world. This is what drives me to photograph.

Why did you want to shoot the KZSU project?
I learned photography by obsessively shooting all the bands that played on Wednesday Night Live for a year or two. Now that I look back on them, I’d say they’re mediocre photos, but I learned a lot, and that process is what led me to take photography seriously. Shortly thereafter, I began studying photography and art in earnest and decided to shoot some of the people I’d met at the station, as well as the wonderfully chaotic tableaus of wires and outdated analog technology that I enjoyed gawking at. This series is a personal project in every sense.

Do you have any upcoming projects?
I’m planning to shoot a new chapter of “Endless Stream” that explores ideas about our sense of place, about our need for borders and nation-states. I don’t see that series as complete yet. I’ve also been shooting in China for the past couple of years and am in the process of figuring out what fascinates me about that country.

In the last year or so, I’ve ventured into multimedia work with projections onto unconventional surfaces and found video snippets. I’ve also become interested in incorporating words into my photographs and musical performance into installations, but all this is still in a fairly experimental stage.

So, why your website is called Killer Yellow!
I took a philosophy class early in my time at Stanford and it lit my brain up. One of the papers I read mentioned a thought experiment ascribed to Saul Kripke. He invents the concept of “killer yellow,” which is a shade of yellow that instantly kills anyone who perceives it. Do we perceive this wavelength as yellow before death or do we die before knowing what hit us? The question is about the nature of our perception of external sensory information, whether a perception could register physically before we are aware of it.

I don’t mean to suggest that I am the equivalent of that color, but the idea of a color that could kill you felt potent to me in the context of a visual medium, so I chose it for my site.