"I want to show that things can go well" 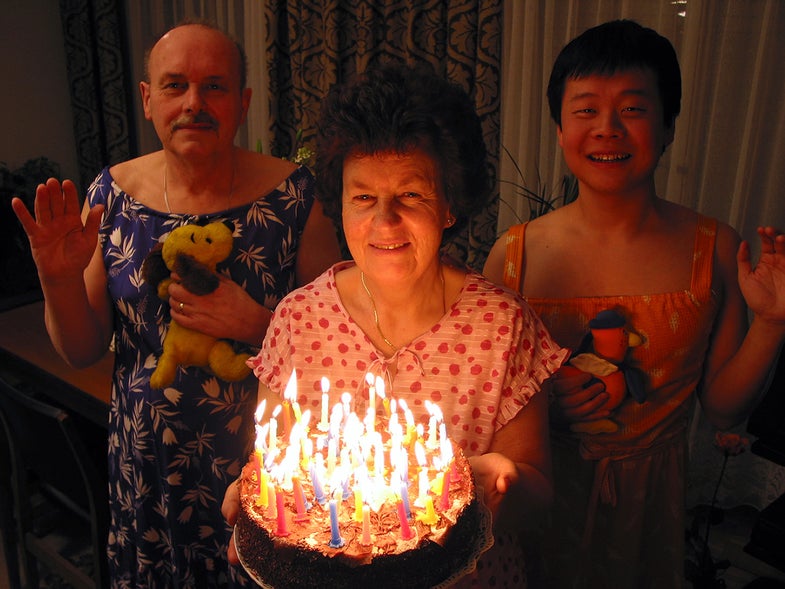 Artist Stéphane Winter shows his parents reacting to liquid nitrogen rising from a glass—an at-home experiment from when Winter was studying chemistry. Elsewhere, his mother exercises on the floor prior to a scheduled surgical procedure; his father sits and pores over an Opel car brochure (the vehicle, Winter noted, recently quit after 18 years). Playing with disguises, the whole family dons housedresses; in another image, mother dresses up as son in clothes from his heavy metal phase (Suicidal Tendencies t-shirt, black sneakers). A small sampling of blurry photos, taken by his parents, show young Stéphane before he took up the camera himself.

Born in South Korea, Winter was adopted as a one-year-old by Pierrette and Robert Winter, who brought him home to the suburbs of Lausanne, Switzerland. At the age of 14, he began what would become a 25-year project of photographing his family. The resulting work, Die Winter, is currently on display at Festival Circulation(s) in Paris, and in a book of the same title, out now from Editions Gwinzegal.

The capering of the Winters, largely photographed within the confines of their three-bedroom apartment, highlights family life at its most tender and fun. This is no Christmas card of choreographed togetherness; the edit is quotidian and avoids caricature. During his selection process, he “cut the extremes—the very joke-y and the very intimate,” Winter says. “What was important was to respect my parents, and the respect is in the in-between.”

Winter values an untethered approach; he never created the images with a specific goal in mind. Their raison d’être was simply celebration and play. “I always use photography for personal projects; never as my job,” he explains. He also wanted to counter the prevalent narrative of unhappy adoption stories—even the narrative of destructive families full stop—with a depiction that was emotionally healthy. “Often photographic subjects are not positive ones—and I want to show that things can go well. Since it’s my life, I can permit myself to put forth my family’s story as an example.”

For Winter, the shift of this work from personal collection to public display came at the urging of a friend—in fact, a mailing list recipient. “When my dad died in 2011, I decided to stop taking family photos. It didn’t make sense anymore,” he remarks. He had been pushing back the task of reconsidering the archives—there were about 6,000—until July 2016, in time for a photography festival in Vevey, Switzerland and a tandem publication.

Today Winter divides his time between being a chemistry consultant and teaching a course on photography technique. He’s been working on another project for over a decade about consultants (former colleagues, in fact) who are regularly away from home. “I like to take my time,” he explains. “It’s interesting to see an evolution.”

Die Winter is on view at Festival Circulation(s) in Paris until March 5.