Capturing the stark transformation of beach towns in the off-season 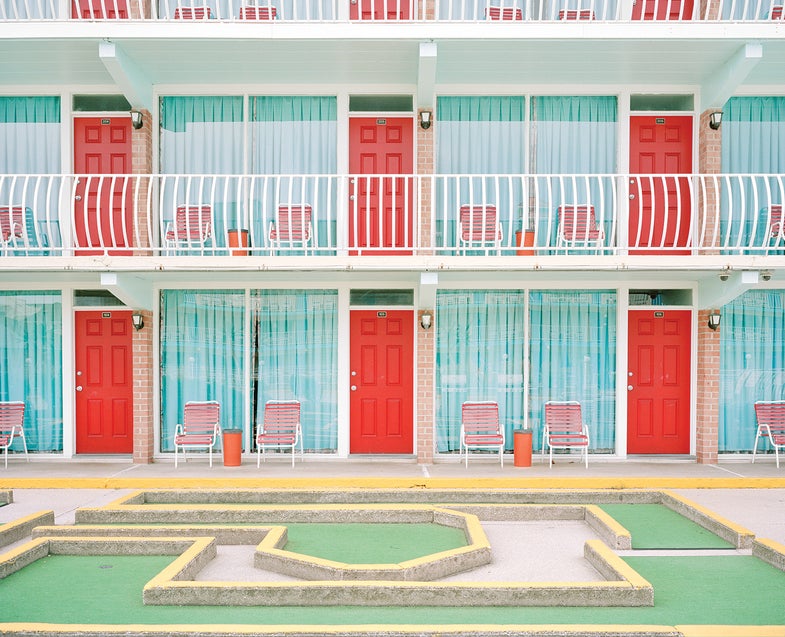 Malibu, Sahara, Monaco—it sounds like an exotic world tour, but you can go to all three in New Jersey! These mid-century modern motels named for sunny locales pepper a five-mile stretch of the Jersey shore, just north of Cape May, known as Wildwood. Tyler Haughey first visited the area one January, after the throngs of people had packed up their beach towels and dusted the sand off their feet, leaving these architectural gems to sit lonely and shuttered.

Haughey grew up 100 miles north, near Asbury Park, where he witnessed summer tourists vacationing “down the shore” as well as the stark transformation of these beach towns in the off-season. “[I’m] embracing it as part of my identity,” the photographer says. Looking like abandoned film sets in winter, the charming architecture of Wildwood’s motor courts—the Waikiki Motel, the Lollipop, and the Jolly Roger—captivate Haughey. For the past two years, he has been researching, interviewing historians and townsfolk, and documenting these candy-colored relics in frozen conditions devoid of people, dubbing the project Ebb Tide.

These structures with futuristic flourishes and sparkling pools have been tempting visitors since 1954, when the opening of the Garden State Parkway brought 350,000 cars to the area each year. Overnight, hundreds of motels sprung up to accommodate the influx. Their glamorous names and tropical details were inspired by Miami Beach and the fantasy of vacations families couldn’t afford.

Today, a little over 150 “doo-wop” motels are left, protected by the National Register of Historic Places. “I aim to show these historic sites in a new light while at the same time bringing awareness of them to a wider audience,” Haughey says.

When selecting a subject, he looks for a site where there are “as few distractions as possible,” highlighting the uniqueness of each motel. “It’s like shooting portraits of people,” he says of details like towering plastic palms flanking a lobby entrance or a giant concrete elephant overlooking a pool.

Haughey’s work captures the dreamy leftovers of a time so often idealized today. His images remind us that nostalgia is something to be visited for a short amount of time, and then left behind. What lingers are just the shells of that bygone era.