How many different ways can this window look? 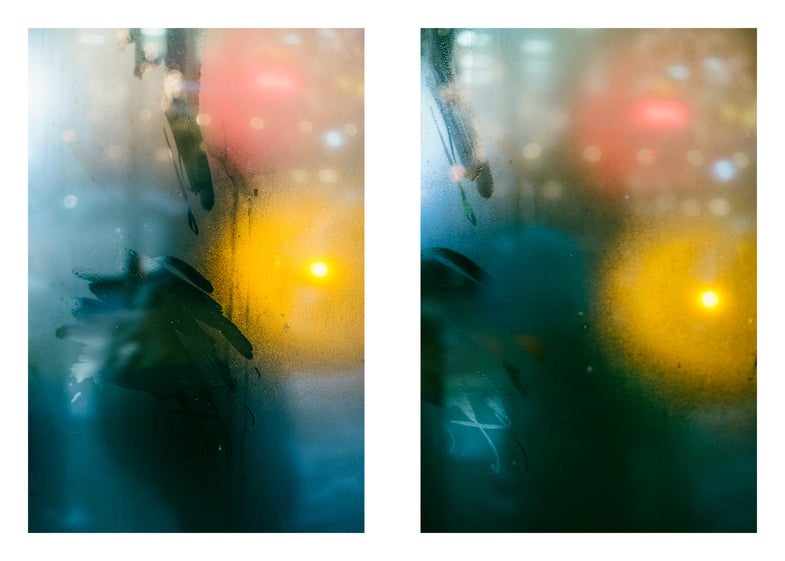 “You develop a routine to rely on for some of the coldest, worst winter days,” says Peter Hoffman. “Wake up. Work out. Work. Get coffee in town. Work more. Stare out the window. Get distracted. Try to work again—but stare instead… How many different ways can this window look?”

The Chicago-based documentary and portrait photographer who recently released his first monograph has been working on a new series, “Glass/Corner,” a more conceptual, abstract body of work all shot through a single coffee shop window last winter. We spoke to Hoffman about the seductive qualities of foggy, frosted glass, using photography to challenge how we see something so normal, and making an impact with images that are quieter and more restrained than the rest of what’s competing for our attention online.

When did you start this series, how far along are you, and how do you imagine it realized in its final form?

The edit is a work in progress, but I’m not photographing it anymore—at least not specifically for this project. To an extent this project was only possible because of the insanely cold winter we had in Chicago last year. I photographed a lot from January to March last year and then have lived with various edits on my studio walls throughout the year. I’d like to see it realized as a book and as an installation; I have slightly differing ideas for each. The book is more important to me at this point.

Where is the window you’re shooting from and what is the significance of that place?

I don’t want to get too specific but it’s just a window in a coffeeshop on the corner of a pretty average town pedestrian intersection. I really started shooting this particular window because it frosts over so severely. I’ve consistently been utilizing ways of breaking down the notion of what a photograph is traditionally thought of. I like pulling photography away from its inherently representational qualities and introducing abstraction. That notion of playing with perception and trying to use photography to challenge how we see something so normal (in this case a pedestrian crossing) was the driving element here.

As far as my process, I just returned to the same place repeatedly during various times of day and just photographed and photographed. I wanted to see how many iterations of what is essentially the same photograph I could make. I enjoy setting limits and trying to unpack as many possibilities as I can within the given parameters.

There are other themes that come in to play with this work from a more personal viewpoint—I photograph from an emotional place generally. I am still working out how to articulate that with this work and I’m not sure about the relevance yet, but it’s also about being trapped—not just physically. It’s about monotony and fear and social anxiety, things of this nature. It probably has to do with how harsh last winter was at times. I’ve been in and around for Chicago most of my life, but the cold last winter—it leaked in to my bones in a new way or something.

When I first saw the work, I immediately thought of Saul Leiter’s c.1960 photo “Package” that was recently licensed for the cover of New York Magazine, as well as the proliferation of these types of images, shot through foggy or rain-covered windows, on Instagram (see Ruddy Roye’s feed). I was wondering if either had crossed your mind while you were making the work, and why you think this might be such a popular trope in our visual culture?

I wasn’t familiar with the Ruddy Roye images you mention but I just looked them up (I do follow his feed, but I haven’t caught those pictures somehow). I love Saul Leiter’s work and that was definitely on my mind when I was making this work. I’ve always had a soft spot for street photography, in particular Leiter’s work, Gus Powell’s, and some of Joel Meyerowitz’s as well—the color stuff. I started experimenting with street photography five years ago, but it’s funny—when I first discovered Leiter’s work I was actually playing with journals and collages. And then I saw Leiter had this beautiful way of not only photographing but also of painting and journaling that really struck me. I think it empowered me to be honest. I thought his work was so honest and intimate, and it was so different from anything else I was seeing at the time, but also so simple—very accessible work. It was refreshing for me at that time to see that kind of work getting validated. In some ways this project is probably a bit of a tribute to Leiter’s pictures.

As to why it’s so common—I’ve never thought of it as especially common, but I try not to think about that too much. I don’t think it’s unique either to shoot a foggy window, but there are so many images out there these days, that if I think too much about what’s being done, it’s hard not to psych yourself out about the purpose of your own work. I know these kinds of pictures have been taken before, so I can only hope to build on that and add something new to the discussion. From a formal standpoint, there’s an inherent beauty to pictures made in bad weather—the colors, light and textures can all be very seductive for a photographer. While not ignoring them, this particular project is about things beyond those formal aspects.

Tell me about how you’re playing with scale, boarders, and juxtaposition of images in this series. What effect are you exploring?

When I was working with the images in a uniform way, they became a little too suffocating to me. It was almost like the window became an impenetrable wall for me as a viewer. I needed to put the window into context, and to make sure sometimes I could emphasize what was beyond the window, instead of the window itself. I also need to be able to create rhythm as you work through the images, even though the images are essentially different versions of one thing. Some images are extreme crops, and in that case I’m finding the right photograph within a larger images. Because I see this whole project as an exercise in expanding perception, devices such as extreme cropping, pairing and borders help emphasize certain things.

On the Internet, strong singular images rule. With so much competing for our attention, high-action photojournalism tends to do well, while more meditative, restrained, perhaps ‘difficult’ images, commonly get overlooked. Can you talk a bit about making photographs of the latter persuasion with this contemporary horizon of expectations?

I’m really just making pictures the way that I feel compelled to, and if people take the time with them I’m thrilled. That said, I’ve already been rewarded in the process of making them. I’ve never really thought of my work in terms of single images and I’m just not very drawn to images that are a quick read. Even in my editorial work where often just one portrait is published I strive for a pretty gentle approach where I hope the viewer can look deeper into the image after first glance.

This isn’t to say that I don’t think about what makes a single photograph successful, but I don’t think you can separate a photograph from the context it is presented in, and I always think about making images that belong with other images from the project. Making images is a meditative thing. I want to tune out everything and just use my eyes to slow the world down. I hope viewers who give themselves a few minutes to look into the work will feel rewarded. These pictures aren’t meant to tell a story or provide any concrete information in an efficient way, they’re about slowing down and getting so engrossed in the beautiful details and moments and colors of the world that you forget you’re there.