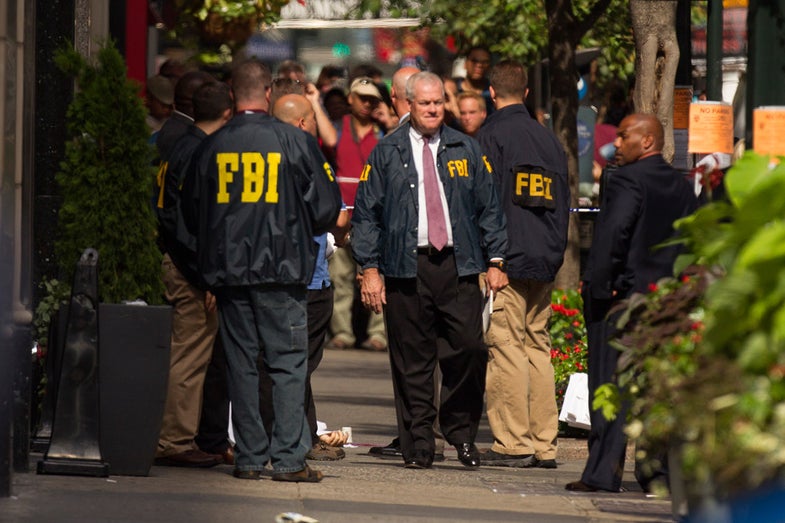 Law enforcement officers stand in front of a hand sticking out from underneath a sheet covering a body on 33rd St after a shooting at the Empire State Building in New York August 24, 2012. REUTERS/Lucas Jackson (UNITED STATES - Tags: CRIME LAW). � Lucas Jackson / Reuters
SHARE 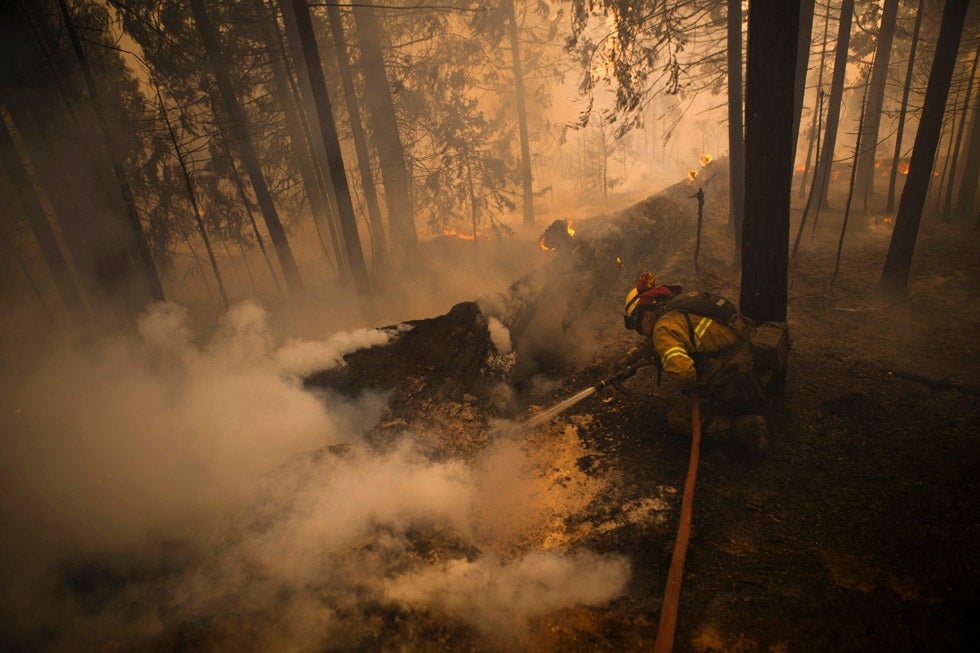 A firefighter battles the Chips fire near Greenville, California

A firefighter battles a blaze near Greenville, California. The fire has forced evacuations and burned over 47,000 acres in Northern California. Max Whittaker is a freelance photojournalist shooting for Reuters. See more of his work on his personal site. 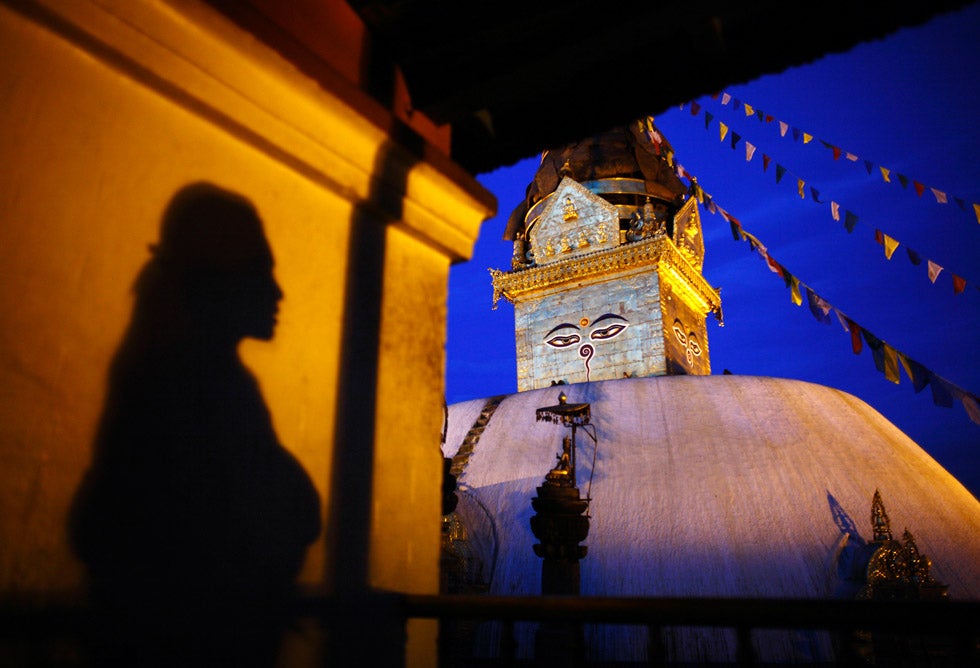 The shadow of a woman is cast on the wall of a monastery in Kathmandu, Nepal. Navesh Chitrakar is a Reuters staffer based in Nepal. His work has appeared in our weekly roundup more than any other photographer. You can see more of his incredible images here, here, here and here. 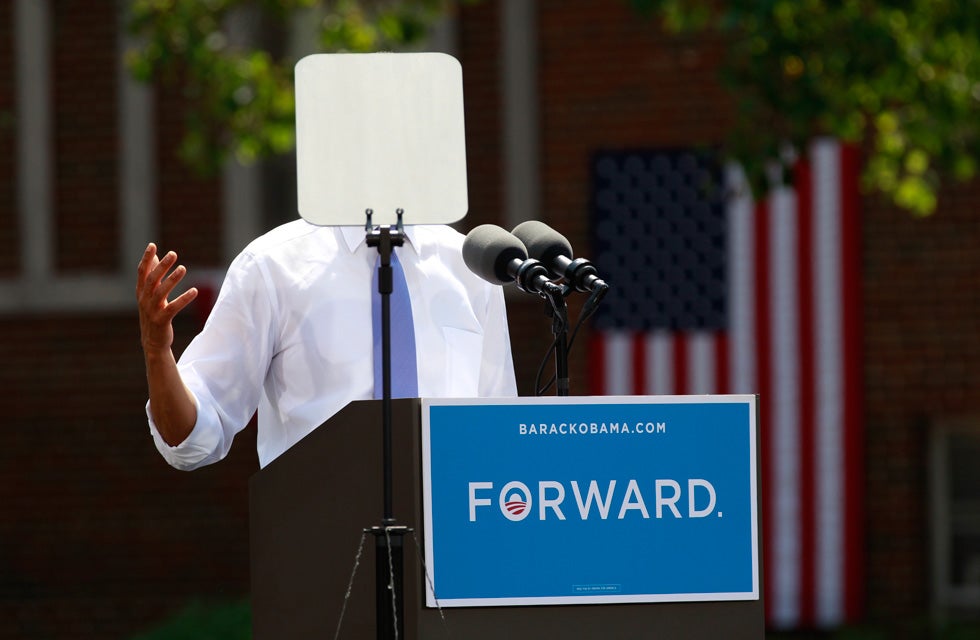 A teleprompter obscures U.S. President Obama as he speaks during a campaign event in Columbus, Ohio

A teleprompter obscures President Barack Obama as he speaks during a campaign event at Capital University in Columbus, Ohio. Kevin Lamarque is a US-based Reuters senior staff photographer who has been with the agency for over 25 years. 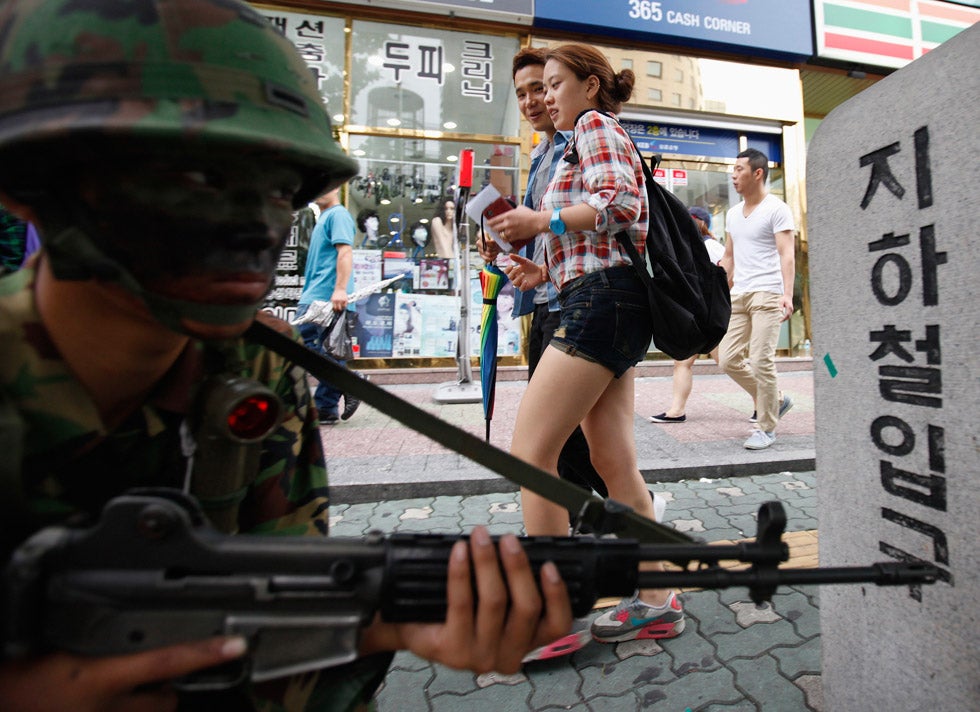 Pedestrians walk past a soldier participating in an anti-terror drill at a subway station in Seoul, South Korea. Kim Hong-Ji is a photojournalist working for Reuters out of South Korea. See more of his work on his personal site. 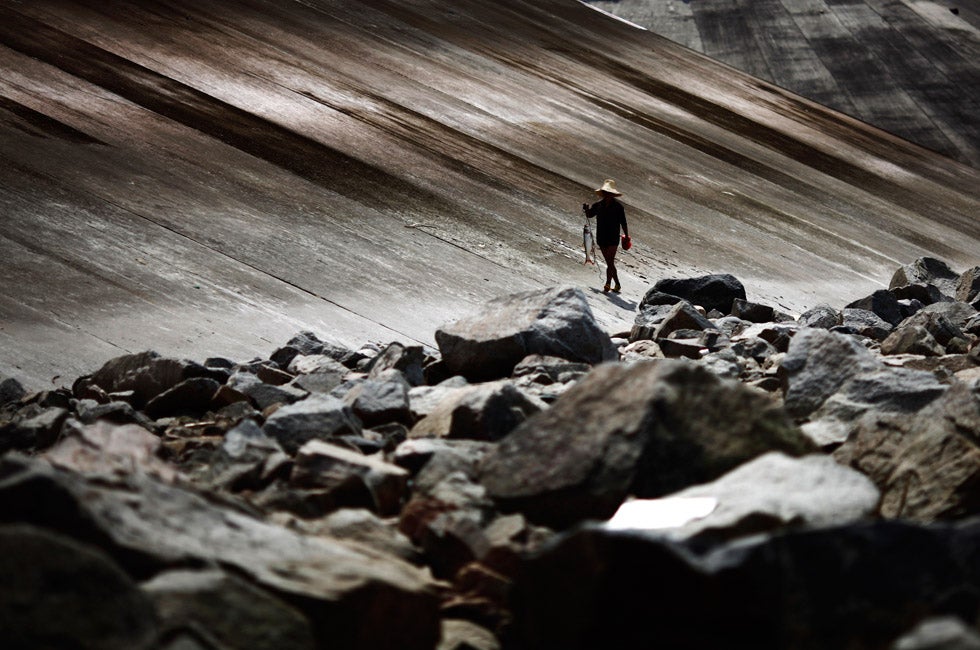 A fisherman walks with his catch on the banks of the Yangtze River, near the Three Gorges dam in Yichang

A fisherman walks with his catch on the banks of the Yangtze River, near the controversial Three Gorges dam in Yichang, Hubei province, China. Carlos Barria is an Argentinean photographer who moved to China in 2010 to document daily life there for Reuters. 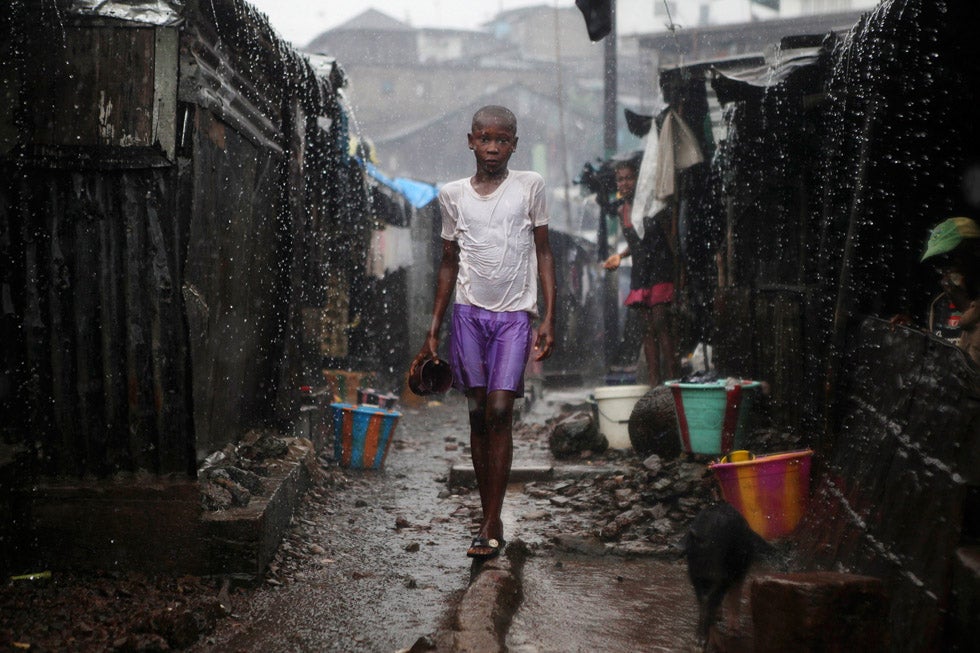 A child stands in pouring rain in the slum of Susan’s Bay in Sierra Leone’s capital of Freetown. Sierra Leone’s government has described the current cholera outbreak in the West African state as a “national emergency.” At the height of the wet season, over-populated areas with poor water and sanitation are exacerbating the spread of the disease. Simon Akam is a freelance photo correspondent for Reuters based in Sierra Leone. His career has brought him to some of the furthest reaches of the planet—see his incredible portfolio on his personal site. 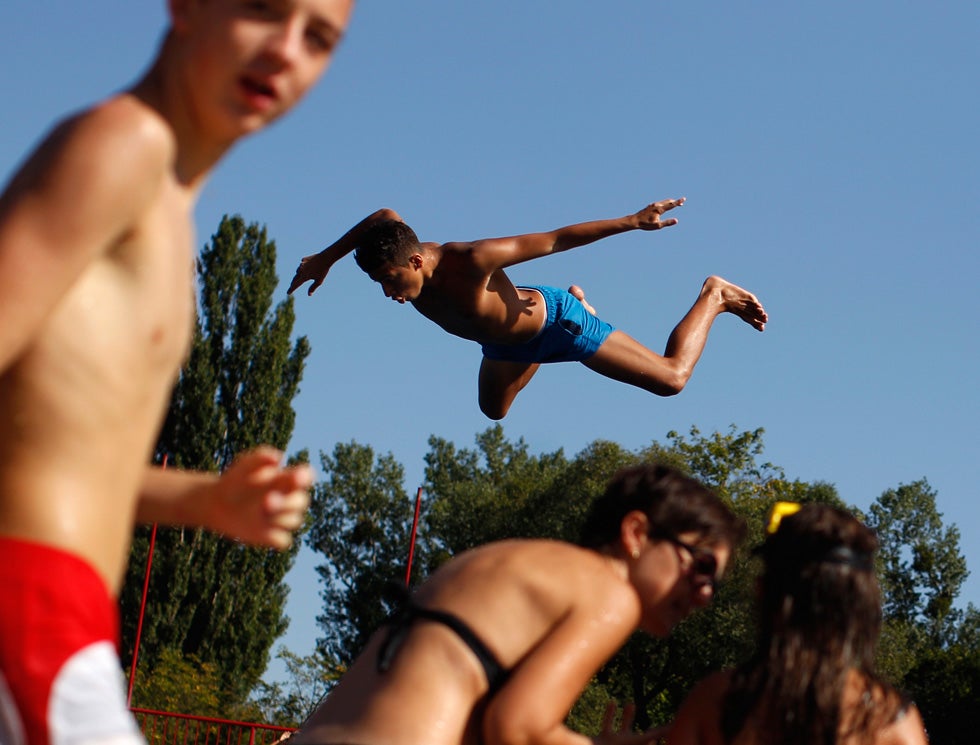 A youth jumps from a diving platform at Stadionbad, a public outdoor swimming pool, in Vienna

Children jump into a swimming pool to keep cool in Vienna, Austria, during a heat wave earlier in the week. Lisi Niesner in an Austrian-based photojournalist shooting for Reuters. Keep up to date with her assignments by following her Twitter feed. 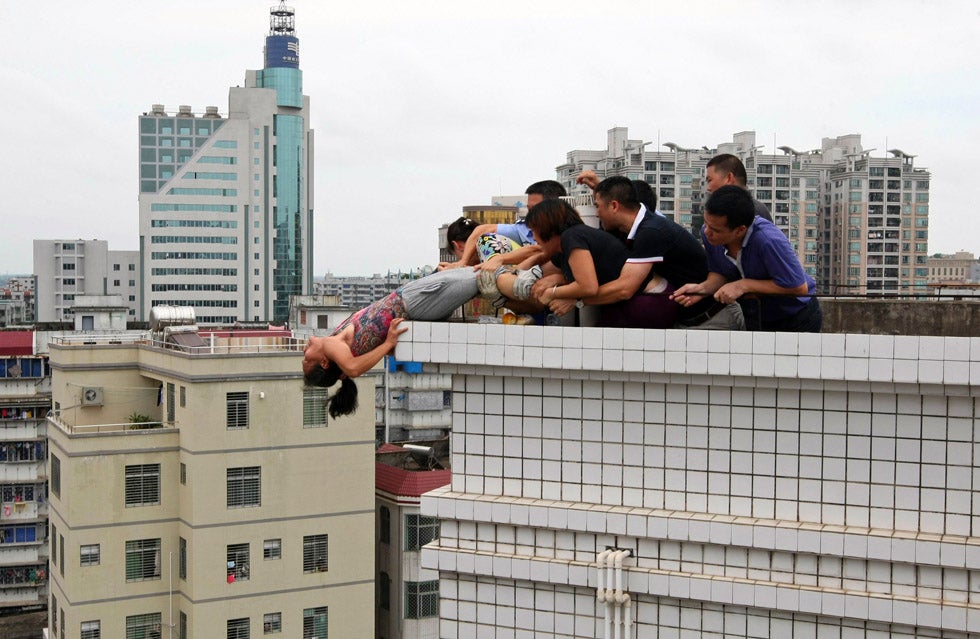 Rescuers and relatives stop a woman from committing suicide by jumping off a building in Zhanjiang, Guangdong province of China. 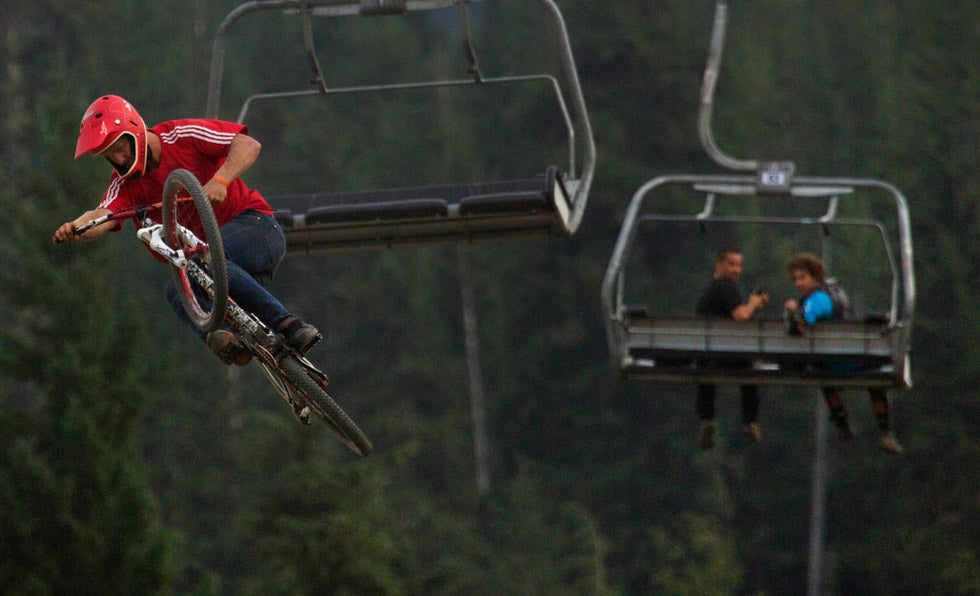 Sjoholm of Sweden. competes in the Red Bull Joyride during Crankworx 2012 mountain bike festival in Whistler

Linus Sjoholm of Sweden competes in the Red Bull Joyride during the Crankworx 2012 mountain bike festival in Whistler, British Columbia. Andy Clark is a freelance photographer shooting for Reuters. 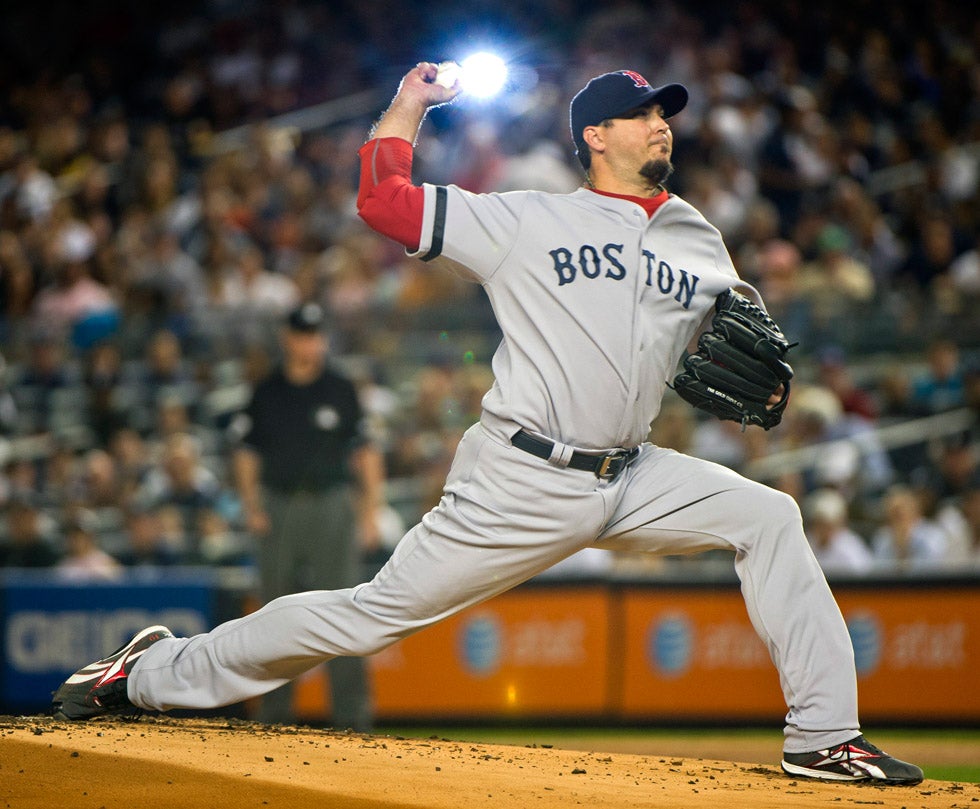 A fan’s camera flash goes off in the stands as Boston Red Sox starting pitcher Josh Beckett throws a pitch to the New York Yankees in the first inning of a game at Yankee Stadium. Ray Stubblebine is New York-based Reuters staffer who has been with the agency since 1988. See more of his work on his personal site.