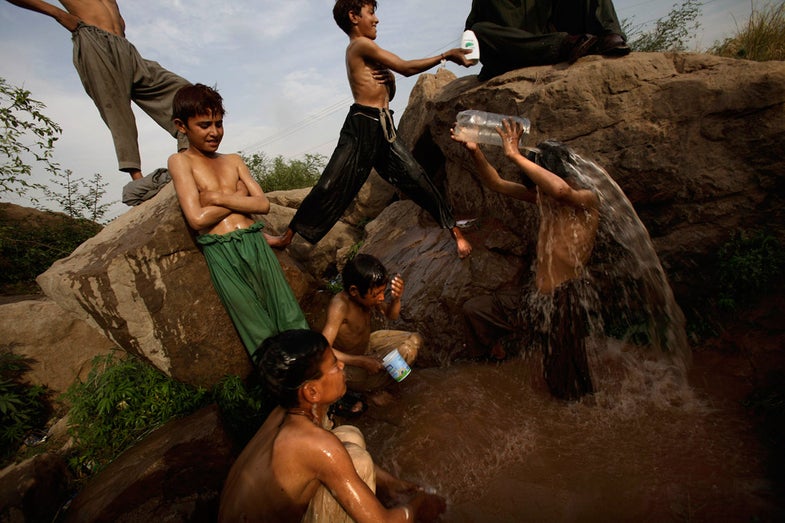 Pakistani boys, who make a living by collecting recyclable materials and selling them to a recycling factory, shower in a pool of water created by a broken water pipe following their daily work, on a roadside on the outskirts of Islamabad, Pakistan, Tuesday, April 17, 2012. (AP Photo/Muhammed Muheisen). Muhammed Muheisen
SHARE 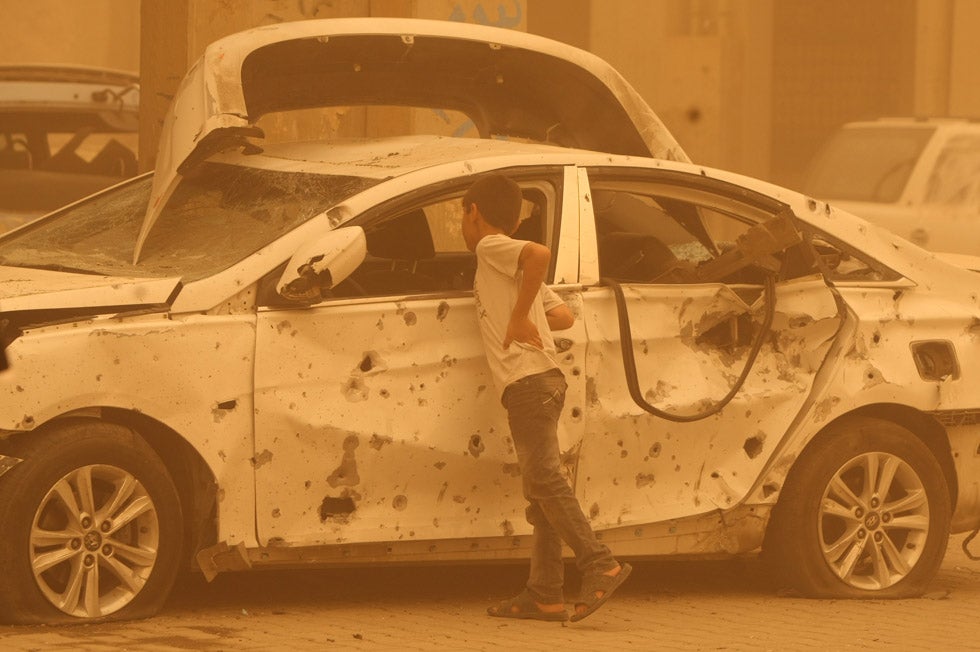 An Iraqi boy inspects a car destroyed in

An Iraqi boy examines a destroyed vehicle in Baghdad’s Haifa Street, the result of a car bomb. Ahmad Al-Rubaye is an AFP staff photographer based in Baghdad. You can see more of his work covering daily life in Iraq on his Flickr page as well as on AFP’s portfolio site. 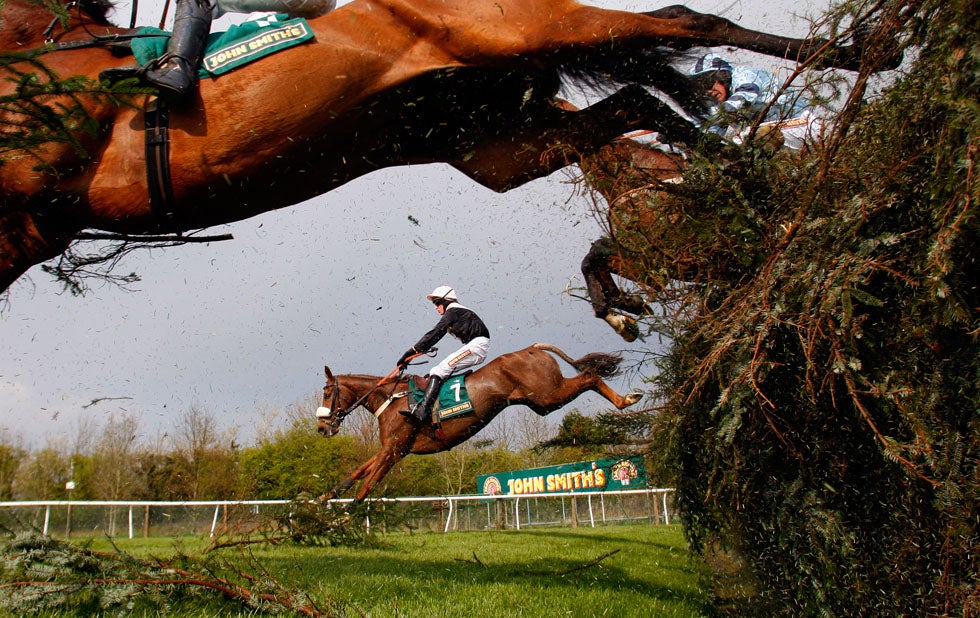 Herecomesthetruth, ridden by Tom Cannon, jumps a fence in the Topham Steeple Chase in Aintree, northern England. Russell Cheyne covers a wide range of international sports including soccer, boxing, horse racing, and skiing. The former Chief Sports Photographer for the Daily Telegraph, he now works mainly for corporate clients while filing for Reuters. Check out more of his work on his website. 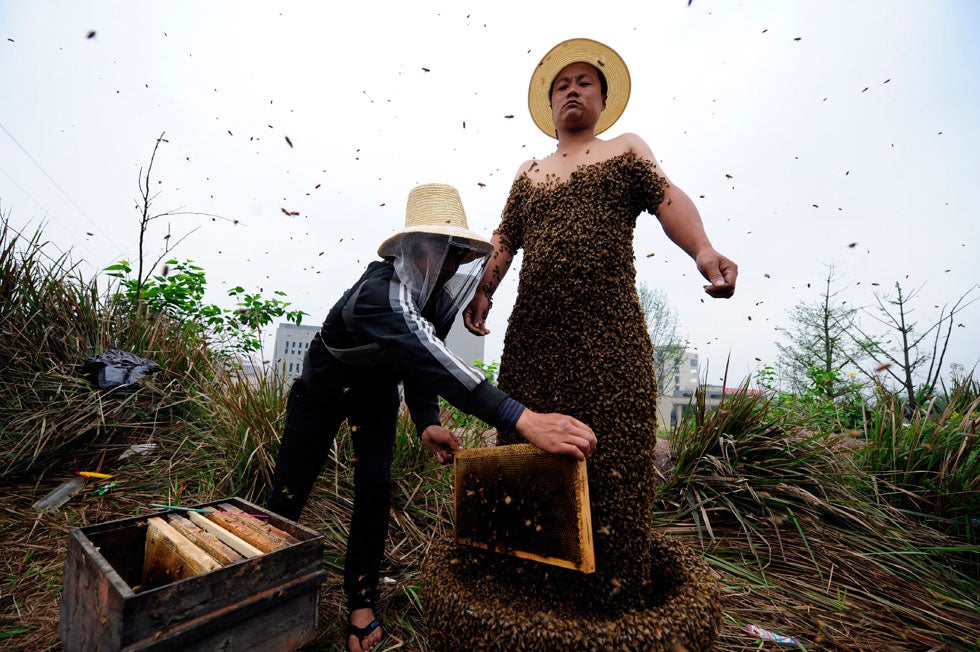 Chinese honeybee farmer She Ping covers himself with bees at his farm in China’s Southwest Chongqing municipality in a world-record-breaking attempt. Ping, with the help of an apprentice, successfully covered himself in 33.1 kilograms or about 331,000 bees. The previous world record was 26.8 kilograms of bees. 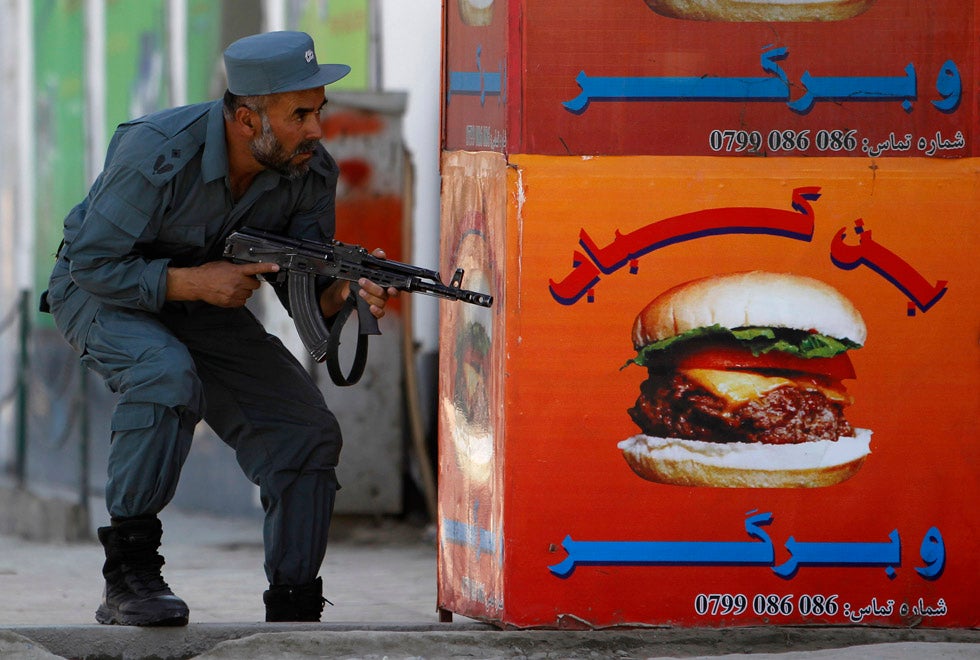 An Afghan policeman takes position at the site of an attack in Kabul. Insurgents fired a rocket-propelled grenade into a house used by British diplomats in the center of the city. Omar Sobhani is Reuters staff photographer based in Iraq, and is no stranger to documenting violence. 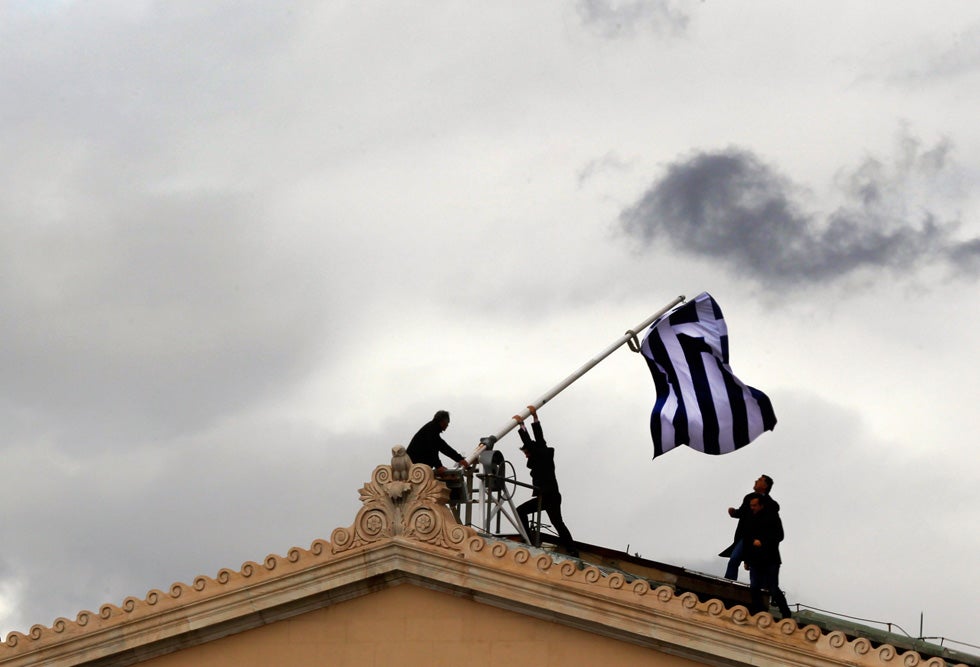 Parliament employees raise flag atop the parliament in Athens

Greek parliament employees replace a torn flag atop the parliament building in Athens’ Syntagma Square. Yannis Behrakis was previously Reuters’ chief photographer for the Israeli and Palestinian territories, before moving to Greece in 2010 to cover the financial crisis. He has been with Reuters since 1987. In 2000, he was wounded while on assignment in Sierra Leone in an ambush. He claims the only reason he was able to get away from the attackers and survive was thanks to “hostile-environment training” he had done five years earlier. You can keep up with his assignments by following his Reuters blog. 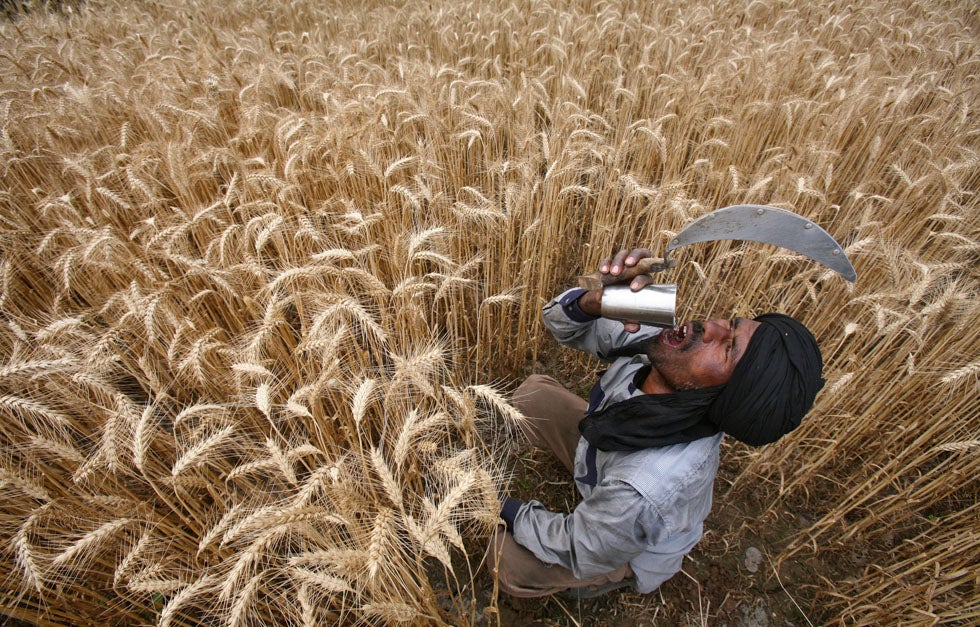 A laborer takes a break to drink some water while harvesting a wheat crop in the Indian village of Jhanpur. Ajay Verma is a freelance photographer, working out of Delhi for Reuters. 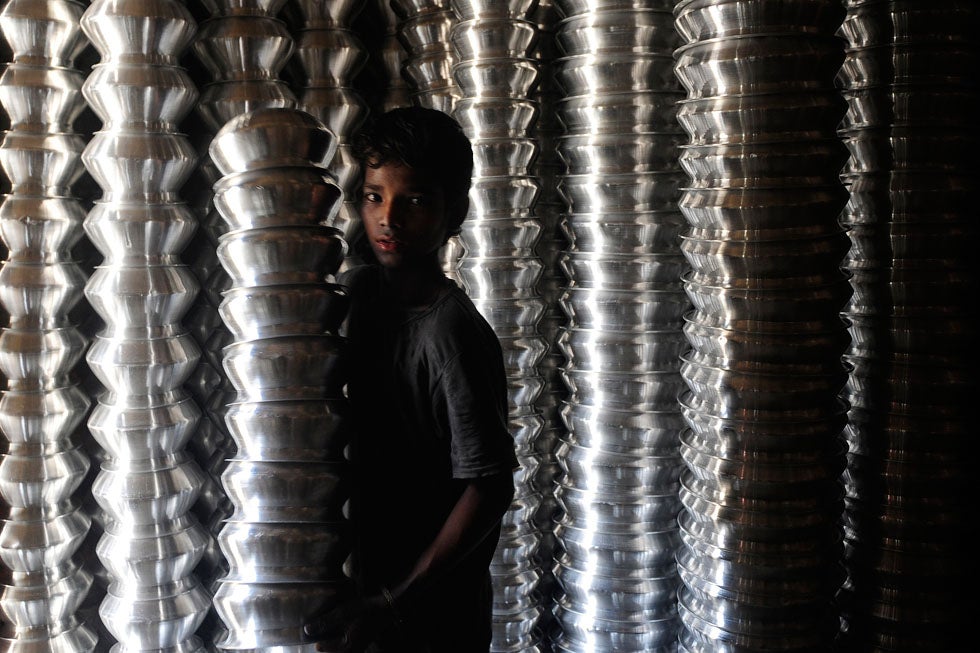 A Bangladeshi boy works at an aluminium

A boy poses in an aluminum pot-making factory, where he works, in Dhanka, Bangladesh. UNICEF estimates that somewhere around 6.3 million children under 14 are currently working in Bangladesh. Munir Uz Zaman is a freelance photographer, working for AFP in the Dhanka region. 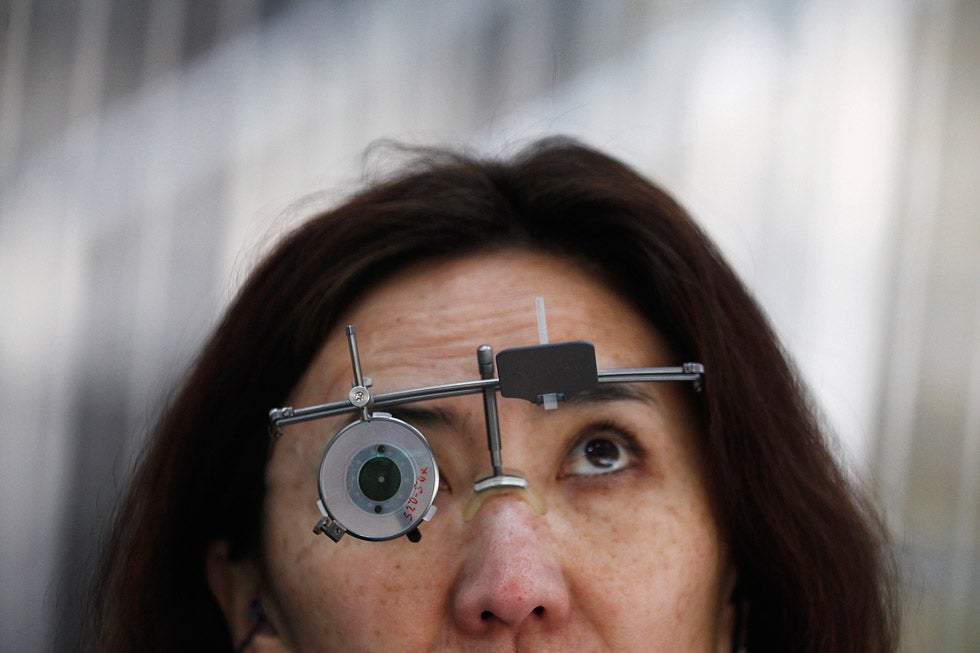 A shooter looks up during a training session for the ISSF Shooting World Cup, taking place at the new Olympic shooting venue in London. Stefan Wermuth is a Reuters sports photographer based in England. You can keep up with his day-to-day assignments by following his Reuters blog.