A Photo Fright Most Viral

If you sit at a computer all day, there’s an excellent chance you’ve come across the Nightmares Fear Factory Flickr... 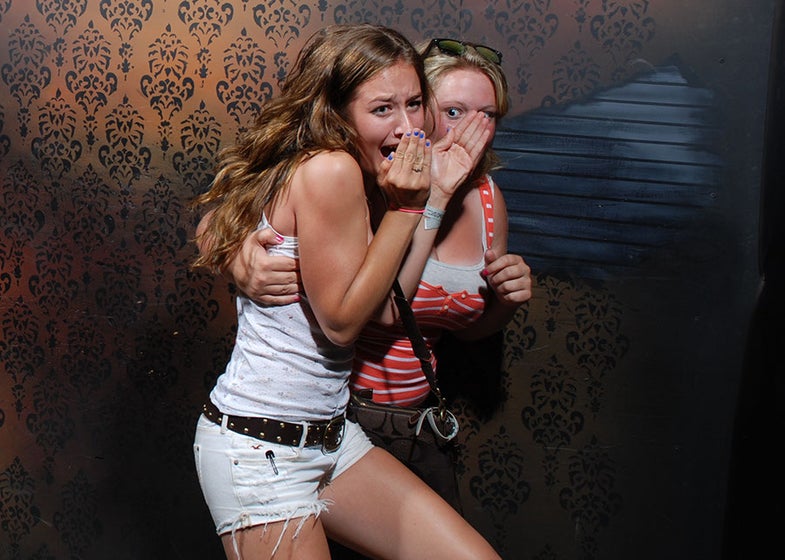 If you sit at a computer all day, there’s an excellent chance you’ve come across the Nightmares Fear Factory Flickr photos this month. In that stream, a haunted house just over the Canadian border in Niagara Falls, Ontario, has posted hundreds of photographs of its patrons getting the bejeezus scared out of them over the last two Halloween seasons–much to the delight of the greater internet.

It’s easy to see how these photos became an instant viral hit. Responding to a determined Fear Factory PR push, Buzzfeed posted some greatest hits from the stream on October 6, and from there, the pickup was fast and intense. On the date of the Buzzfeed post, “our website visits increased over 10,000%,” says official NFF spokesman Vee Popat. That the house has a dedicated press spokesman should give you an indication of the seriousness of this operation.

I was curious to know the backstory of these images. Speaking to Popat via email, it’s clear that the photos were intended for purely promotional and commercial purposes, and by that evaluation they were a complete and resounding success. And yet, their immediate popularity and shareability online shows how the very same photos could easily stand on their own as a fun project with more artistic intentions. It’s an interesting example of how to successfully employ photography online in marketing today.

And on the question of what’s scaring the people in the photos, I tried. But Vee isn’t budging.

American Photo: So, what’s the backstory of how these images came together?
Years ago, the owner, Frank Lapenna, wanted to do something similar to what the amusement park roller coaster rides were doing [taking photos of riders at especially stomach-dropping moments and then making them available for purchase as souvenirs]. He would hide inside the maze and snap pictures with a handheld camera, then run out of the maze and look at the photos. We all thought they were hilarious.

The first automated camera was set up around 10 years ago, and we then stated selling [printed] photos as souvenirs. Then we started emailing photos as souvenir digital copies. And two years ago, we developed a social media strategy using the pictures on Facebook and our website—later to Twitter, Flickr, Daily Booth, Tumblr, etc.

What was the technical setup?
A few years ago, Frank sourced out a guy at an industry trade show, and the two developed the software to take and crop the pics automatically. It was a tough setup in the maze, to snap a picture at the precise time. The camera in the maze is a Nikon D80.

How was the location selected?
We knew where the best place would be—one with a really good scare, and also a spot suited to the logistical challenges of setting up a camera to automatically snap a picture in a pitch-black room. We’d love to have more cameras set up—there are actually two in the maze, and one video camera.

Can you trace the path of these going viral? Who was the first to pick them up, and what happened from there?
It started from a post on Buzzfeed on October 7 that linked to our Flickr feed. People started to see the post and our Flickr feed and post some of their favorite images to their own blogs and Tumblrs. It started from there, but later that day national media (ABCNEWS.com/CBSNEWS.com) started calling—then it just went crazy all over the world. The next day, our website visits increased over 10,000%. Since then we’ve had significant increases in website traffic and in views and “likes” of our Facebook page. Our Flickr feed went from 50 views prior to October 6 to over 3.5 million views as of today.

How’s business?
Business has increased this month, no doubt to all the exposure received from these pictures going viral. We’re very grateful!

And the million dollar question: Without spoiling the fun, can you give us a hint of what the people in the photos are looking at?
Come find out for yourself!