Photo of the Day: The Sentencing of Alexei Navalny

A policeman beats a protestor during demonstrations against the sentencing of Russian opposition leader Alexei Navalny, in Moscow. Navalny was... 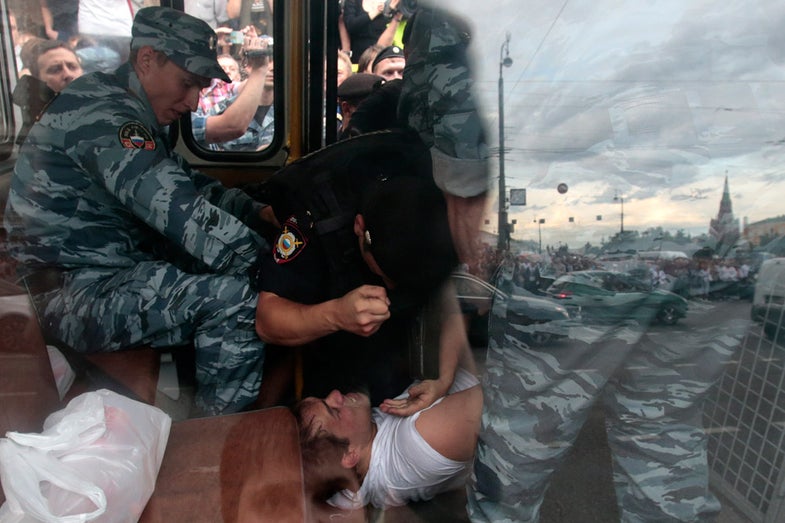 A policeman beats a man who was detained inside a police bus during a protest against the verdict of a court in Kirov, which sentenced Russian opposition leader Alexei Navalny to five years in jail, in central Moscow, July 18, 2013. Russian opposition leader Alexei Navalny was sentenced to five years in jail for theft on Thursday, an unexpectedly tough punishment which supporters said proved President Vladimir Putin was a dictator ruling by repression. REUTERS/Tatyana Makeyeva (RUSSIA - Tags: POLITICS CIVIL UNREST CRIME LAW) - RTX11R0E. © Tatyana Makeyeva / Reuters
SHARE

A policeman beats a protestor during demonstrations against the sentencing of Russian opposition leader Alexei Navalny, in Moscow. Navalny was convicted of theft and sentenced to a five year jail term, which most see as unexpectedly long. Protesters believe President Vladimir Putin is using Nvalny’s crime to repress the voice of the opposition.

Tatyana Makeyeva is a Reuters staffer based in Moscow, Russia. She covers a wide range of subjects for the agency, including breaking news, features and professional athletics.

Photo of the Day is our Web team’s pick for the most intriguing or moving photojournalistic image, shot in the past 24 hours. We will be posting a new photo Monday-Friday. See past Photos of the Day here.