Around 2008, I was taking care of my father and also taking his picture–photographs that later turned into a book,... 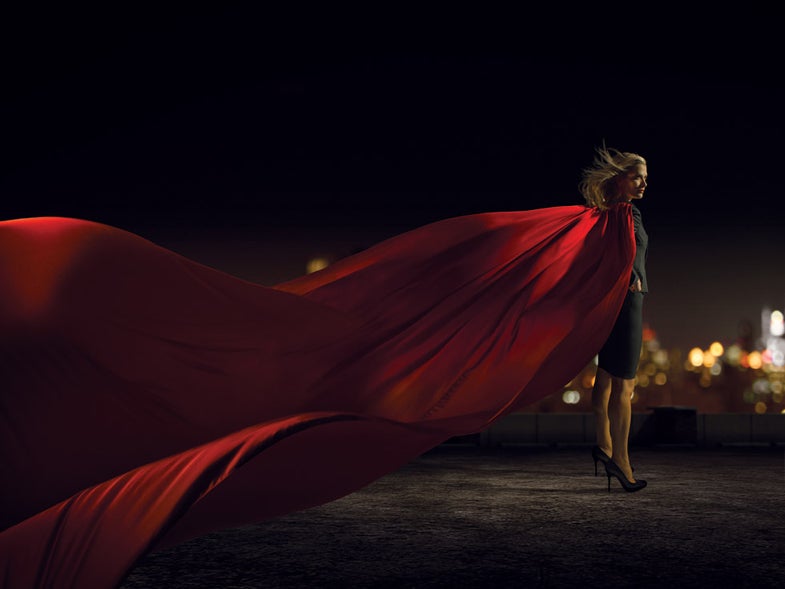 Around 2008, I was taking care of my father and also taking his picture–photographs that later turned into a book, Days With My Father (Chronicle, 2010). Mortality was on my mind. During this time an English magazine sent me to take a photograph of a guy who had had a lot of cosmetic work done. When I saw him I was struck by how he looked, and all these thoughts about mortality and death suddenly coalesced around the portrait. This man had gone through the reverse of my experience: Instead of coming to terms with mortality, he was pushing it away. That became the trigger for a second book, A New Kind of Beauty (Dewi Lewis, 2011). That’s the great joy of shooting for magazines: It opens windows to vistas you may not have considered in your artistic vision before.

What I realized with Days With My Father is that what matters to people, for the most part, is love and kids and pets. Magazines have a bit wider range than that—if they started printing nothing but stories about love, pets, and children, there would probably be a lot fewer magazines and I might have a lot less work—but there’s still a fairly small gene pool in terms of what they talk about. My job is to try and make the obvious interesting again and again.

In that sense magazine work is like going to the gym: It keeps you limber mentally. Often, on assignment, I’ll come upon an idea, or with a method for executing an idea, that I’ll end up using later in an art project. For instance, in the picture with the guy lifting off from his chair, the smoke is all cotton wool. I had become obsessed with making smoke out of cotton wool and I did it in a lot of shots, and then later I started using it for a personal project that I was working on.

The freedom and creativity that make conceptual photography so great also brings to the work a certain vulnerability.

With “new,” there’s no precedent. People generally tend to be afraid of new; they’d rather go with something that they’ve seen before, that they know is not going to offend or upset or that has been proven to work. In looking for certainty, art directors or photo editors sometimes want the photograph to tell the whole story. I don’t want the photograph to tell the whole story—that’s boring.

At the other end, if a photograph doesn’t explain enough, it’s confusing and loses impact. A couple of years ago I got a call about doing a photo for The Atlantic for a story about women managing to be mothers and businesswomen at the same time. I thought it would be great to have a woman holding a briefcase with a baby inside it and crying or something. The art director came back and said, “Oh, no, no, they don’t want to do that. They just want to have a bag on the floor with a baby in it.” It was the safe version, but it lost a lot of context. Without the woman aspect there you kind of lose half the story.

So I said to them, “All right, here’s what I’m going to do. I’m going to shoot your version, then I’m going to shoot my version, and then you can have both.” I had the prop stylist bring a skirt and just stand there holding this bag with a baby in it. And then that’s what they ran on the cover. [A version of that photo, with the baby crying, became one of American Photo’s 2012 Photos of the Year—Ed.]

I don’t think editors want to say no; I just think it’s often easier to say no. I can hardly blame them for their trepidation—it’s so easy for a conceptual photograph to totter off the rails and become cheesy. And sometimes an idea just doesn’t work. But you’ve got to be willing to be a bit risky with your vision.

I’m lucky because I have a track record. I remember thinking about this about five years ago, that at some point I didn’t have to explain my ideas so much to people because I’d done a lot of stuff and I’m sort of a known quantity in the magazine world, so people assume if they call me there’s a good chance that it won’t be total rubbish.

I always think I sound like a crazy megalomaniac, but if you do conceptual stuff you kind of have to be a dictator about it. Sometimes magazines start to assume it’s an invitation for everyone to change the picture: Because it’s made up in the first place, they feel that they can continue to make it up and to stamp it with their own brand. When that happens often it all ends in tears—mostly mine.

I had a funny conversation a few months ago with a magazine. They called me up and wanted me to do a story, and I had this idea which was quite funny. I told them the idea, and…crickets. They said to me, “Well, we like your idea, but have you seen our magazine?” And I said, “Well, have you seen my photographs?” I don’t mean it in an insulting way, but if you look at my pictures you see the kind of things I take, so why would you assume that I’m going to do anything very different?

That was an exception, though. Most editors are fantastic to work with and it’s a really great collaboration. Very few meddle. In the end we’re of one mind: It’s about the product, and I’ve been very fortunate to have the trust of a lot of people to turn out interesting work. I spent 10 years in advertising, basically learning to convince people that the ideas that I was jabbering on about were worthwhile. I guess that’s how I got people in the magazine world to believe in whatever I was talking about.

It’s the habit of standing up for my ideas that gives me the stones to do things like ask Alec Baldwin to do a bit for a personal project. I had been hired recently to shoot Alec Baldwin for the cover of a magazine. His people called up about a week later and said Alec really loved the picture, he’d like to buy it from me, he wants to use it on his website, et cetera, et cetera.

I said, “That’s fine.” And then I said, “How about this: Instead of buying the picture from me, Alec can have it for free if he participates in this art project I’m doing.”

I know it’s kind of crazy, but I just thought, what have I got to lose? Nothing. The woman laughed and said, “OK, tell me what the project is,” and I did. And then she said, “All right, I’ll tell Alec.”

I thought there’s no way she’s going to tell Alec Baldwin some crazy photographer wants him to do this project. But she e-mailed me back and said, “OK, Alec says,” and the moment she said, “Alec says,” I pretty much shat my pants. But she said, “Alec says why don’t you explain it to him in an e-mail and send it to me.” Next thing you know, he says he’s going to do the thing! And that only happened because a magazine sent me to take his picture.

Phillip Toledano believes that photographs should be like unfinished sentences: There should always be space for questions. Born in London and based in New York, his work has appeared in Vanity Fair, The New York Times Magazine, The New Yorker, Esquire, GQ, Wallpaper, The London Times, The Independent Magazine, Le Monde, and Interview. Toledano’s fine-art work, which includes photography, installation, film, and other media, focuses on socio-political ideas. Learn more at mrtoledano.com.