Peter Dixie, How You Living?

I’ve been watching Peter Dixie’s “Hinterland” series over the past couple of years with some interest. As much as I... 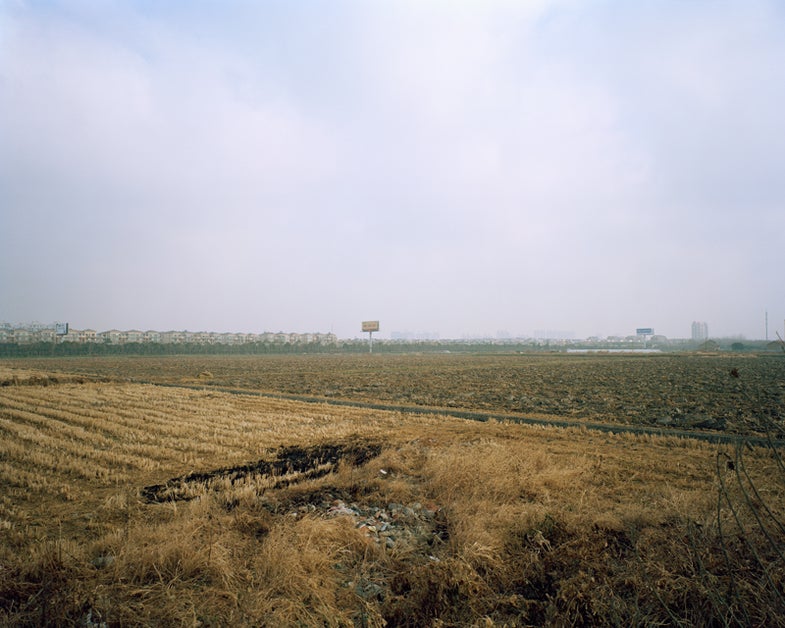 I’ve been watching Peter Dixie’s “Hinterland” series over the past couple of years with some interest. As much as I enjoy living in Japan and partaking of its unique photographic culture, it’s clear that China is currently the geopolitical center of the world. Much like Tomoko Kikuchi’s photographs of Chinese drag queens, there is a historical resonance in Dixie’s photographs, where we can feel that we are observing the land change before our eyes. Dixie studies the outskirts, or “Hinterland,” of Shanghai. In his statement, he describes his methodical way of working, in which he travels to the farthest station of a subway line, then sets out on foot in search of landscapes “in which a new use had been imposed, where the land was between uses and subject to spontaneous, informal or improvised uses, or where a new order was in the process of replacing an existing order.” Dixie is working on this extended project while also shooting full-time as an architectural photographer in Shanghai. This puts him in a unique position, and makes him an ideal candidate for our How You Living? series. 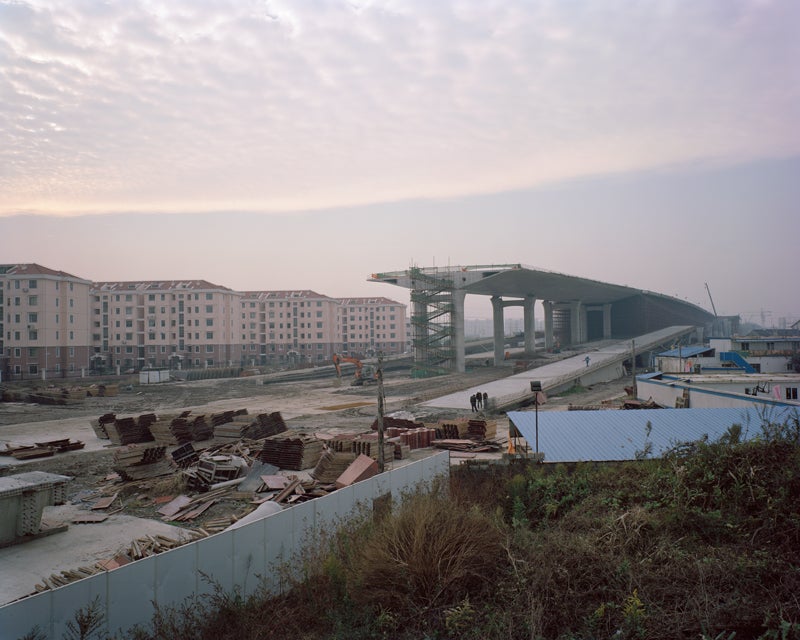 My secondary school had a darkroom used by the adult education programme. I attended those classes and learned basic black and white printing and processing, also a bit of E6. It was quite casual. While living In Tokyo, I started to take photography more seriously and really wanted to find out what I could do with the medium. I experimented with a lot of different films and by chance walked past the DOI lab one day. They had prints of Sato Tokihiro’s “Breathing Lights” series in the window. I took some odd films that I had shot – Polaroid blue on white instant slide film – to ask if they could do prints. Any time that I had something unusual I would take it there and often saw amazing work being done. I pestered the then-manager, Nasukawa Fumio, who eventually agreed to let me come and watch what they were doing, one morning a week. I worked in the film processing department for a short while helping with colour tests for the E6 and C41 lines, then moved on to print in Black and White, at which point they gave me my own darkroom to use – I paid cost price for materials and if I left work to be done they gave me a substantial discount, they even toned prints that I left to dry there. Later I learned to print from colour negs and then colour positive printing, and finally learnt from the retoucher. I kept going there until I left Japan, for just over two years in all. Everything was done very carefully with great precision – they even exposed the frames on contact sheets individually with colour corrections. Nowhere I have been since has even come close to the level of care and attention that every job received there. Unfortunately, the lab folded shortly after I left.

I left Japan to return to the UK to study, and chose the FDA Professional Photography course at AIB in Bournemouth. It was just two years, focused on commercial photography and seemed to have good facilities. I failed to complete the course however, feeling disappointed by the difficulty I had in maintaining a habit of photographing while attending all required classes. I had also underestimated how much I would spend on materials. At that time, I worked on 5×4 almost exclusively and was making quite large prints. It got very expensive. The school had a fantastic library and that was an introduction to a lot of work that I had not seen previously. Finally I decided that I would learn more pursuing my own photographic aims than following the course and dropped out. On reflection I was learning a lot, but at the time it did not feel like it. 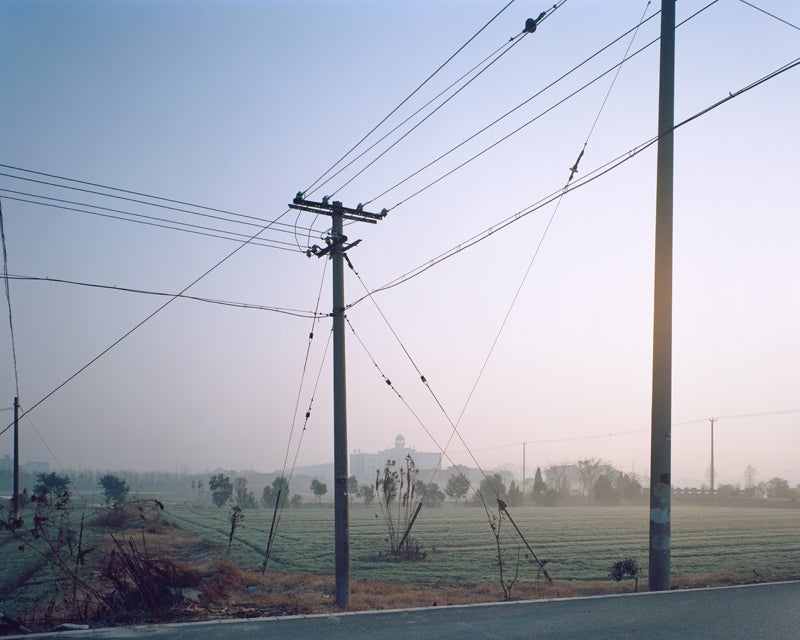 Yes. Since Mid-2011 I have been working as a photographer full-time. Before that I was working a full-time job as a means of supporting the production of “Hinterland” and a handful of other projects. At that time I felt my job meant that I was not looking at or working with enough images, so my wife and I made the decision to concentrate full-time on photography. We then formed a small company over the second half of 2011 and since then we have both worked full-time running that business, she handling the business and administration, me the photography.

What’s it like working in China as a foreign photographer?

Firstly I should say that I have not worked substantially as a photographer in any other country so it is difficult to make comparisons. The good side is that there is plenty of construction and that means regular work. The downside is availability of materials is often limited, especially large format film. Developing services are often unreliable or not of sufficient quality – even trying to process films by hand myself has been proving much more difficult that it ought to be. From a commercial point of view clients often have limited experience in commissioning photography, and this can make it difficult to understand what exactly is required. However, this has also meant that we have got a lot better at asking the right questions.

How did you end up there?

After leaving the course that I was studying in the UK I wanted to continue photographing cities, mainly as a follow on from the images that I produced in Japan. Shanghai seemed like a place that was undergoing interesting changes and somewhere that might be visually apt as a continuation from the Tokyo pictures. As it turns out, this was not the case and it took me a long time, around five years, to find a way of portraying the city that I was satisfied with. Shanghai has a lot of walls – most residential compounds are walled in – which it makes it hard visually to show landscapes of the city. Secondly a lot of photographers have done similar work here already – especially showing the gleaming new city and the destruction of the older areas in contrast. This seemed obvious and simplistic – I wanted something that would help me understand the city in a more complex way. I think over time Hinterland has dome that and it has brought a lot of issues within China into perspective – what it means for the population to become urban, what it means to say Shanghai is the biggest city in the world. So, although this is not what I imagined before coming (the idea I had was to photograph the elevated highway system), it is what has kept me here. 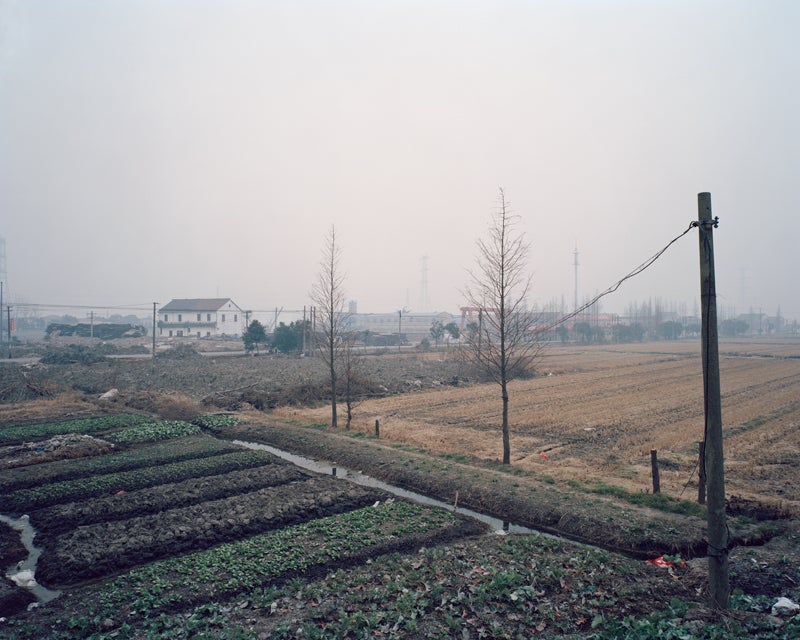 How closely related is your income-generating and personal work?

I try to keep them as close as possible. For commissioned work, obviously the client’s preferences have to be taken into account, but as far as it is possible to do so I structure images and series of images in the same way that I would do in any other work, and try to maintain a consistent aesthetic across all work.

It seems like you’re using similar skills in the two bodies of work, but do you have enough time and energy left over to work on personal projects?

Recently commercial projects have been taking up a lot of my time, but there are always some small things that I can work on close to home. Part of the problem is remembering what I have that is ongoing when I know that I have free time to work on it. Hinterland takes a greater effort and so that can easily get pushed aside, but it is also something that I attach a lot of importance to, and if I have doubts about the weather, or as now the technical treatment of the film that it can stop completely as now.

I’m imagining that you might have some clients outside of the city, though whether you would have time to work “Hinterland” on the way seems like another matter.

With “Hinterland” I always go specifically to shoot for that project. Partly due to the method and locations, partly because I rarely use that camera except for on those images.

What’s your biggest worry as a photographer these days?

That is a difficult question. I always have fairly personal worries about the direction of my work, both self-initiated projects and commissions. At the moment, in terms of presenting work, as the internet is usually the first medium of distribution, and one that massively favours single images, then maintaining the integrity of a series is a concern. In terms of architectural photography, the more influential blogs can definitely play a decisive role. As a photographer I will do what I can to create work I believe in, though knowing the presentation of that work might not always be ideal. Another trend for those blogs is to ask for increasingly large files – now to the point where the images are large enough to cover a magazine page, so at some point whereas previously smaller images were provided free of charge, photographers will need to start being paid for content.

How long do you think you’ll stay in China?

At least three years more. After that depending on how business is and what other opportunities are available we may move elsewhere. I want to stay at least until I have completed a book of Hinterland that I am satisfied with. I had hoped to be able to complete the second round of “Hinterland” this year, but I now doubt that I will be able to. 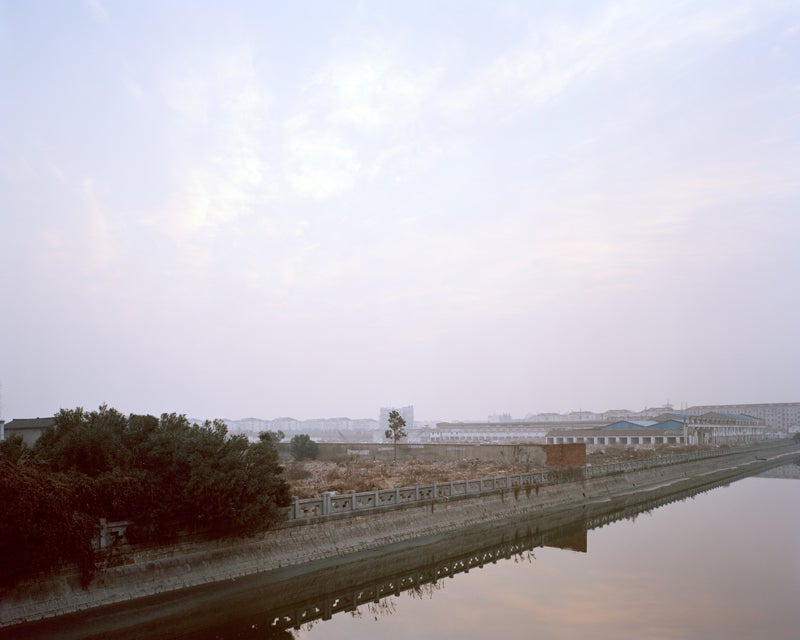