Eric Kruszewski worked as an engineer in Central Asia for more than five years and never felt like he belonged.... 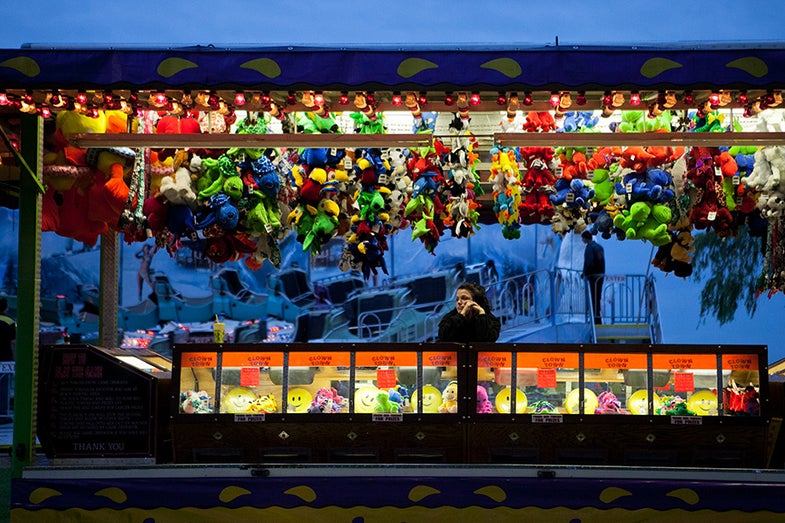 At each carnival location, workers are usually assigned to a specific ride, food stall, or game for the week’s duration. As night falls, a carnival worker waits for visitors to play her game. When the carnival is open, workers usually attend to rides or games from noon until midnight. Eric Kruszewski
SHARE

Eric Kruszewski worked as an engineer in Central Asia for more than five years and never felt like he belonged. The residents of the former Soviet Union were not always warm to foreigners, and Kruszewski did not fit in.

While vacationing in Tibet and Mongolia, he fell in love with photography and not long after returning to the United States in 2010, Kruszewski realized that he wanted to shoot full time. But, ironically, he found he missed the feeling of being an outsider.

With this in mind, he began seeking out alternative cultures to photograph near Richland, Washington, where he was living at the time. He began shooting local rodeos, and at one event he met the owner of a traveling carnival. “I wondered what life behind the Ferris wheel would be like,” Kruszewski says. In 2012 he resigned from his job and went on the road with the carnies.

A team of 60 workers were on the clock from noon to midnight and then would break down rides, game stalls, and food courts minutes after the last customer left. It was a hot summer, and the crew members were constantly on their feet. The work was democratic—everyone did everything. Kruszewski followed the troop in a truck, and when not photographing and conducting interviews, he lent a hand. The carnies were fiercely proud of living outside the norm—the owners went back four generations, but many of the workers (including a race car mechanic and a chef from a famous Las Vegas resort) were adventure seekers like Kruszewski.

After three months of traveling around the Pacific Northwest, the carnival crew dropped him on the side of the road and headed back to their base in Nevada. Craving stability after so much wandering, Kruszewski settled in Washington, D.C.; he is now documenting the closing of a local steel mill.

See more of his work here.