Peter Yang has photographed lots of celebrities for clients like Esquire, GQ, and The New York Times Magazine, but he... 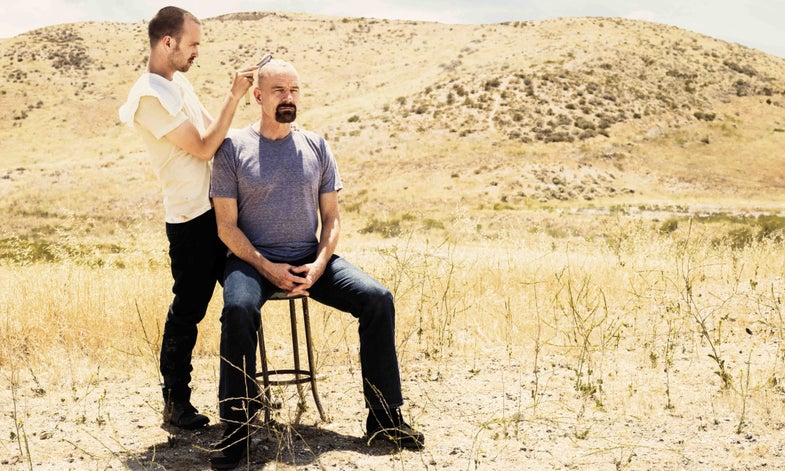 Peter Yang has photographed lots of celebrities for clients like Esquire, GQ, and The New York Times Magazine, but he was nervous when he had to shoot the stars of the celebrated TV drama Breaking Bad for Rolling Stone. “I was so into the show that there was a part of me that didn’t want to believe they weren’t those characters,” Yang says.

In June 2012, Yang arrived in Los Angeles with about 20 ideas for how to shoot the actors Bryan Cranston and Aaron Paul, who played the show’s antiheroes Walter White and Jesse Pinkman. The resulting portrait above was his favorite. It’s indicative of work that Yang likes best: The actors’ postures, minimal use of props, and an open environment tell a story—albeit one subject to many interpretations. It conveys a sense of coming upon a situation filled with conflict and a hint of danger, but it implies trust and serenity, too—and it’s ambiguous about which man is in power.

Rolling Stone chose a different image for the story’s opener, shown at right. Yang was not surprised: “No one else was feeling [the haircut] shot,” he says. But he was still happy with the magazine’s decision. The photo the editors chose still tells a story, but with more direct eye contact and physicality. “And it’s funnier than I remember,” he says.

Happily, Yang says he left the assignment relieved that his illusion had not been ruined. “It was the shoot I was most excited about that year. And after meeting them, I could still believe in Walt and Jesse.”