Sometimes a dream assignment falls through 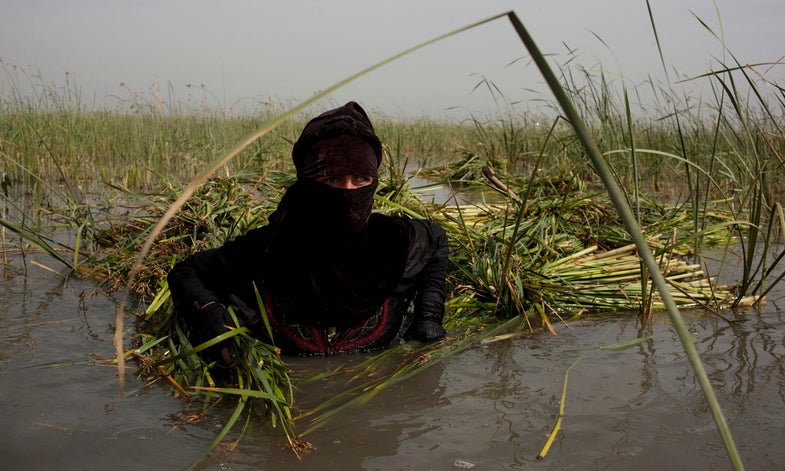 Women from Romelle drive all the way to near Chibaish to collect reeds in the morning. They live near the Glory River where there is no water and grass. Local men stopped them and teased them and when one woman yelled at him they started telling them they shouldn't come here because its not their marsh. They have some kind of infection from being in the marsh. carolyn drake
SHARE 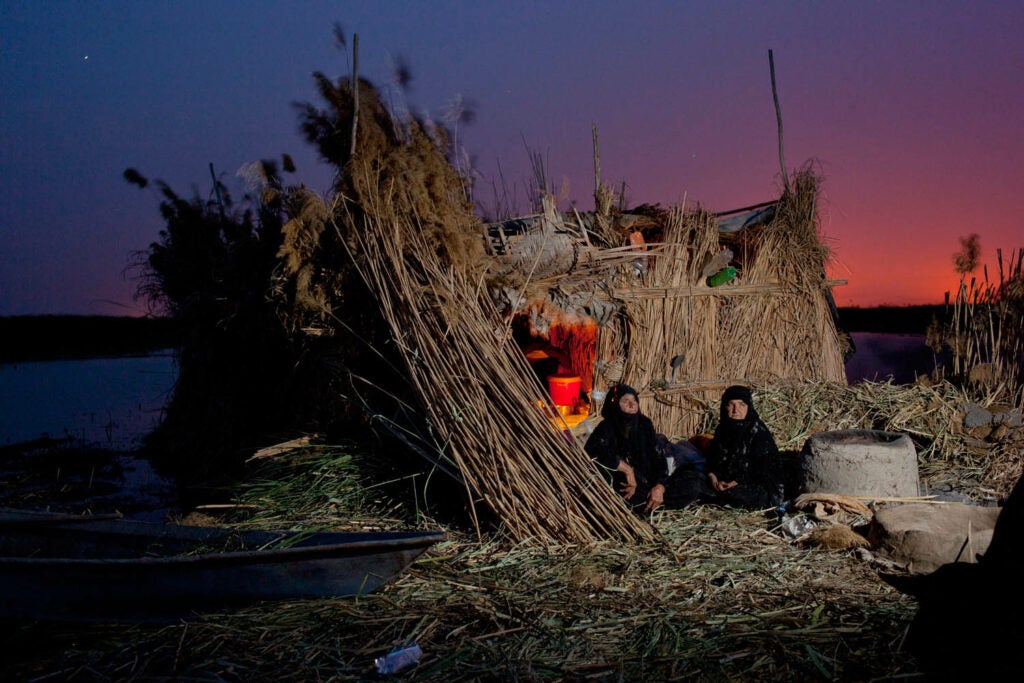 Sisters Hamde Karamala and Fatma Karamala sit in front of their reed house in Central Marsh. The night sky is lit by gases from oil fields in the distance. 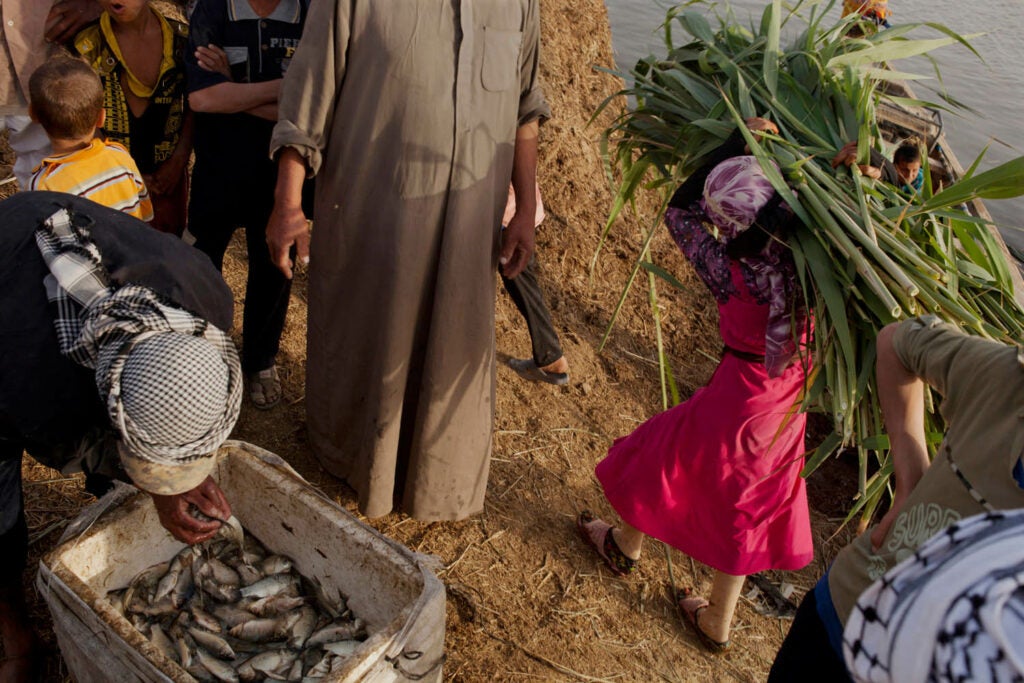 Villagers unload reeds and fish from their boats in Hammar Marsh. 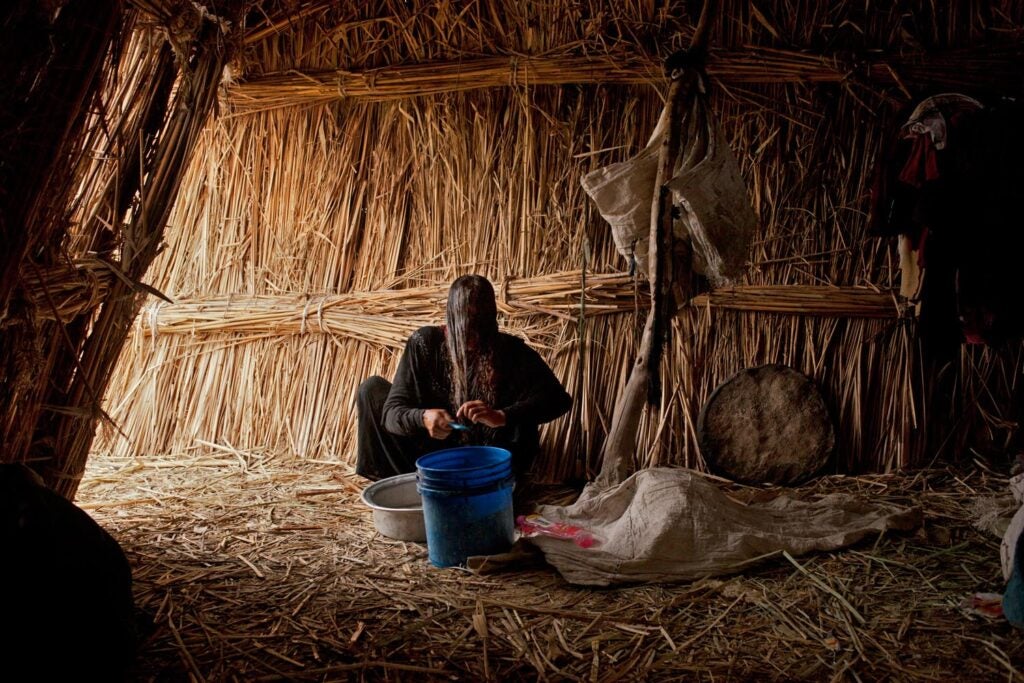 A woman washing hair in a reed house in Hammar Marsh.

Sometimes a dream assignment falls through. Flights are booked, fixers hired, and weeks spent working. Film or files are processed, and spread across 12 pages. Then something happens. Breaking news, war, geopolitical catastrophes. The world has changed, and your magazine issues a kill notice. Back into the archive the photos go.

This scenario, which is more common than many might expect, is similar to the one documentary photographer Carolyn Drake found herself in after a 2012 commission from National Geographic. Following the initial withdrawal of American troops from Iraq, the magazine sent her on assignment for several weeks to cover the partially restored marshlands of the country’s southern region, a site linked both to the Garden of Eden, and one of the most devastating man-made environmental catastrophes of the 20th century. We spoke to Drake about her experience in the field and why the story might have gone unpublished.

What’s the background on this assignment? What was the story about?

The southern part of Iraq was once made up of 12,000 square miles of marshland formed from the confluence of the Tigris and Euphrates rivers. It’s the area mythically known as the Garden of Eden.

The people who live there now are called Madan and are linguistically and culturally tied to the ancient Sumerians, whose lives were intertwined with the reeds, water, and wildlife in the marshes. The Madan are Shia muslims, and during the Iran-Iraq war between 1980-1988, many of them deserted Saddam’s army, using the marshes as a hideout.

In 1991, Saddam sent his army into the marshes and killed tens of thousands of Madan, bombing their villages and burning them to the ground. That same year, he executed a plan he had been sitting on for years, draining the marshes. Embankments were built on the edges of the Tigris and Euphrates to prevent water from flowing into the marshes, and an enormous drainage canal called “Glory River” was built to funnel the water directly to the sea. The UN declared it the biggest environmental catastrophe of the 20th century. The Madan people scattered to other parts of Iraq, often moving to city slums to work as day laborers.

When Saddam was captured in 2003, Madan people flooded back from all over Iraq and began to dig holes in Saddam’s embankments to let the water back into the marshes. Today the wetlands are 40-50% refilled, and many have tried to return to their old way of living, building reed houses, raising buffalo, fishing, and hunting in the marshes.

Who was this shot for? How long did you spend covering it and when?

It’s a story that National Geographic had been considering for many years, but during the Iraq War they felt it was too dangerous. The writer was in communication with an NGO called Nature Iraq for several years, and in 2012, they decided the safety situation had improved enough that we should come and work on the story, with their help. National Geographic had picked up some of my personal work in the past, and I think this assignment came about because they liked my Two Rivers project. In the spring of 2012, I spent about three weeks in southern Iraq and then one week in the mountains in Iraqi Kurdistan, which is the source of most of the water that ends up in the marshes.

What was your experience like? What was the security situation in Iraq at that time?

The US military had just left. We worked closely with the NGO Nature Iraq, which is well-connected in the district of Chibaish where I made most of the images. The marshes extend across all of southern Iraq and it was very difficult to work in areas beyond Chibaish, particularly closer to Iran and along the Glory River. In Amarah, we were detained in the police station for a full day and then escorted two hours back to Chibaish by a line of armored vehicles. The people at Nature Iraq felt responsible for my safety, so they strongly advised me to return to the NGO facility before dark. There were some areas I was not permitted to visit at all, or that I could visit, but not take pictures. In some places, we traveled with an extra security vehicle. I had done that once before in Pakistan. It makes it pretty much impossible to work. All attention is on you; you cant just slip into the scene.

Why do you think the story was never published? Does that happen often when shooting on assignment? How does it feel to put in so much work into something that never reaches an audience?

They held the story for a long time and when the political situation began to unravel in the early part of 2014, I got a note saying they decided not to publish it because the circumstances in Iraq had changed. It’s not unusual for National Geographic to hold a story for a long time, but this was the first time I’d had one dropped. I was disappointed, but these things happen. When I work on independent projects, there’s tons of work that never gets published or never gets to an audience, but the process of making the work leads me and my work somewhere that I wouldn’t have gotten to otherwise. The same goes for assignments. I’ve had the experience whether or not the work was published. And when it comes down to it, that’s why I’m a photographer.

Do you have a lot of work that has never been seen? In your experience working with editors, have you found that they are generally drawn to the same images from your archive for publication as you are?

Since there’s a limited amount of space in a magazine, the editor often wants an image that tells many parts of the story at once or that is clear and direct and graphic. I like those images too sometimes, but am also drawn to simpler, stranger pictures that the editor might see as tangential to the story. Ones in which the story is clouded, or that reflect on the story, or introduce odd details and deviations from the story more than they tell the story. I have plenty of work that has never been seen. I try to avoid putting pictures in my archive that I wouldn’t want to have published. Sometimes I think I should wait longer before adding things to my archive since I tend to work on things over a long period of time, and the work and edit can change drastically.

A version of this story appears in the March/April 2015 print edition of American Photo magazine.