Inside the International Center of Photography’s Inaugural Exhibition

"I think it's telling when an institution doesn't just move its historical vision to another space, it reinvents itself" 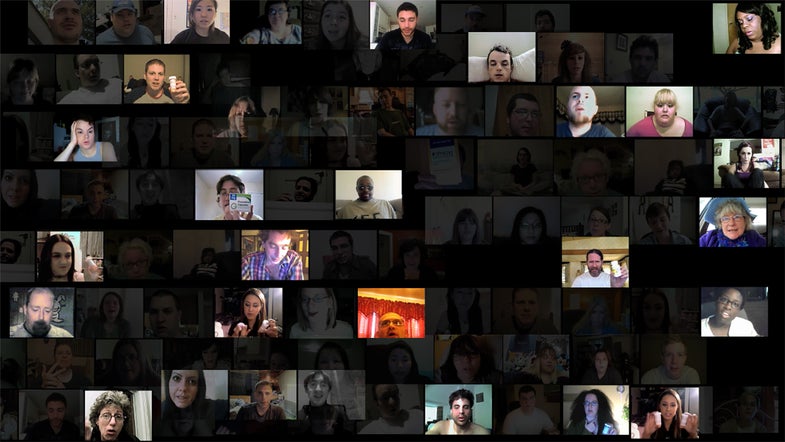 In a small corner gallery on the lower floor of 250 Bowery, a slideshow clicks unassumingly through a carousel of family snapshots, projecting washed out images of anonymous people doing mostly normal things. It’s an understated piece among a survey of complicated and multi-faceted work, but could easily be the beating, analog heart of Public, Private, Secret, the inaugural exhibition at the International Center of Photography’s new museum, which opens to the public today.

Free Fotolab, Phil Collin’s 2009 slideshow project, is culled from donated rolls of undeveloped film, and according to the wall text that accompanies the piece, “questions the relationship between exhibitionism and sharing, voyeurism and exploitation, and production and ownership,” a statement that could be applied to literally every piece in Public, Private, Secret. It’s a sweeping and slightly unsettling look at the act of looking, how we present ourselves in public, and the changing role of privacy in an increasingly surveilled and shareable world.

It’s an ambitious exhibition, given the wide assortment of media represented, and the complex issues the show raises. But instead of feeling fractured and convoluted, a natural side-effect of algorithms gone awry and image oversaturation, the show is witty, focused and sophisticated, while pushing back against assumptions about what a photography show ‘should’ look like in 2016.

Writer and curator Charlotte Cotton was recruited as ICP’s first Curator-in-Residence, a post she says proves that the institution is willing to take risks and confront pressing issues about the state of photography and visual culture. “One of the strengths of ICP is that it has a number of modalities,” she says. “It has an amazing school and a community education program, and an archive and library, and hosts exhibitions, so there is something within those behaviors and relationships that places ICP at the heart of the most pressing discussions about what photography is.”

Cotton, who has addressed seismic shifts in photography in her own books and essays, remains refreshingly upbeat about the path the medium is on, despite the general sense of dread and cynicism that seems to reemerge when change is imminent.

“I’d rather compose a love letter to the future that is deeply optimistic, other than say that photography is over,” she says. “I’m not willing to give up that fight, but that does mean that there needs to be recalibration of photography and visual culture that everyone needs to be involved in.”

Describing herself as curatorially greedy, Cotton said it was just as important for her to include impressive, “masterful” works in the show, as it was to find ways to make the exhibition feel truly participatory. The strategic placement of mirrors throughout the show provide a constant reminder that as a viewer, you are always physically present in Public, Private, Secret. The exhibition opens with a dramatic but minimalist mirrored room, with a monolith wall of introductory text and dueling video installations by Doug Rickard and Martine Syms. Here, and in the many reflective surfaces scattered throughout the show, you can watch yourself looking at something you’re not sure you should be seeing at all. It’s a jarring and exciting way to engage with the open secrets and raw exhibitionism on display throughout the show.

While photography’s heavy-hitters are well represented, the voyeuristic tendencies of Larry Clark, Nan Goldin and Gary Winogrand, are amplified by the work of artists like John Houck, who superimposed facial recognition software over a cut up version of the 1966 film Blow-Up (a film about a photographer who questions what he’s seen, and manipulates his photos to find out what he saw) for his 2015 video project Portrait Landscape. The algorithm’s flashing squares desperately search for something human among the patterns and textures on the screen in a funny, sad and sinister comment on our own attempts to find faces in the crowd. “My hope is that the more historical work can be reanimated by the work that surrounds it,” Cotton says. “The show is less about authorship, and more about actively making connections.”

Cotton says that photography has become too unwieldy for the formalities that so many museums cling to in their curatorial habits—the dry, explanatory wall text, the formulaic genres—but Cotton sees that as an unprecedented opportunity for ICP to shake off the shackles without losing site of its mission to keep the conversation around photography vital and relevant. “I think it’s telling when an institution doesn’t just move its historical vision to another space, it reinvents itself, and in doing that ICP has taken an amazingly profound step forward.”