Nina Robinson on photographing life’s poignant moments amidst its struggles. 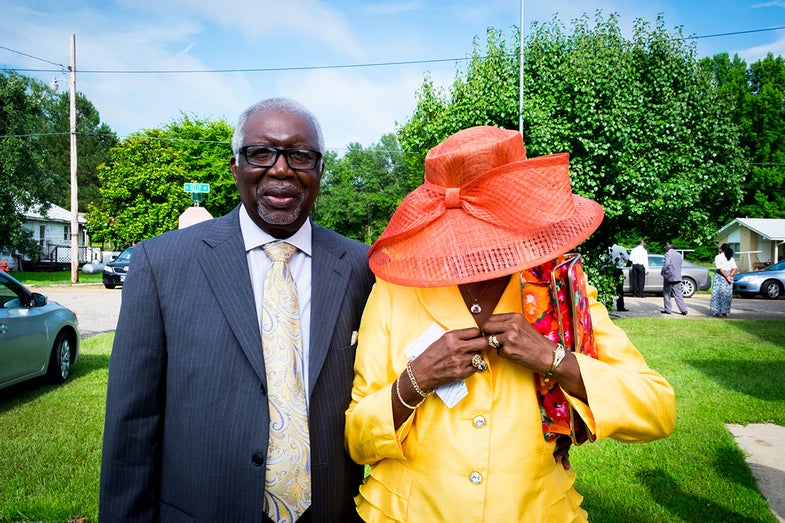 In 2014 when Nina Robinson left her home in the Bronx to visit her maternal grandmother who was dying from cancer in rural Dalark, Arkansas, she intended to make it a quick visit, the first stop on a road trip down South.

After spending one week in Dalark, her grandmother passed away and Robinson decided to abandon her road trip altogether and stay in Dalark. What she thought would be a brief visit to Arkansas—a place she had not visited for nearly 15 years—turned into a three and a half month prolonged stay. During that time she started photographing, both as a way to honor her grandmother’s passing and to reacquaint herself with a community from which she had long been estranged.

The photographs she made in Dalark, Not Forgotten: An Arkansas Family Album, became some of her most personal work to-date and a selection of these images are currently on view at the Bronx Documentary Center through May 29. The show captures the power and strength of a black community living in an economically disenfranchised region and offers insight into rural people typically not pictured in photographs.

“No one knows about them,” Robinson say. “No one focuses on them. No one worries about them. People need to photograph them.”

According to Robinson Dalark, Arkansas is a proud community of landowners, the majority of residents own their homes, but like many southern towns, Dalark’s economy has suffered for over a decade. Businesses have left the area and many homes remain empty.

“I could have easily gone to Arkansas and taken pictures of abandoned homes in order to show economic decline; many photographers do just that,” Robinson says. “But I wanted to show what was still living—the richness and strength that binds people to a community.”

Indeed, Robinson’s images capture life in the midst of death and rich experiences despite economic hardship. Her photographs celebrate the human senses. In the image of the young girl who bites into a candy apple, for example, Robinson celebrates taste. In the photograph of Robinson holding her grandmother’s hand on her deathbed, she memorializes touch. And in her poignant images of her Aunts’ gospel choir, she celebrates the power of song. Ultimately, these photographs showcase human strength in life’s ordinary moments.

“My family is surprised that I want to photograph Arkansas,” says Robinson. “They think ‘Oh she is in New York; why would she want to come here to photograph? They wonder what I am doing—what I could possibly find interesting in Arkansas. But once the images materialize, they recognize the beauty and the meaning in my photographic moments”.

Robinson explains that her grandmother’s death prompted her to reflect on her life as a photographer and renewed her desire to make personally meaningful work that considers the lives of her black family. “Blackness is multilayered, ” says Robinson. “We need more perspectives of what a rural, black, southern community looks like.”

Nina Robinson will speak about her work and her exhibition Not Forgotten, An Arkansas Family Album at the Bronx Documentary Center on Saturday, April 16th at 7 PM