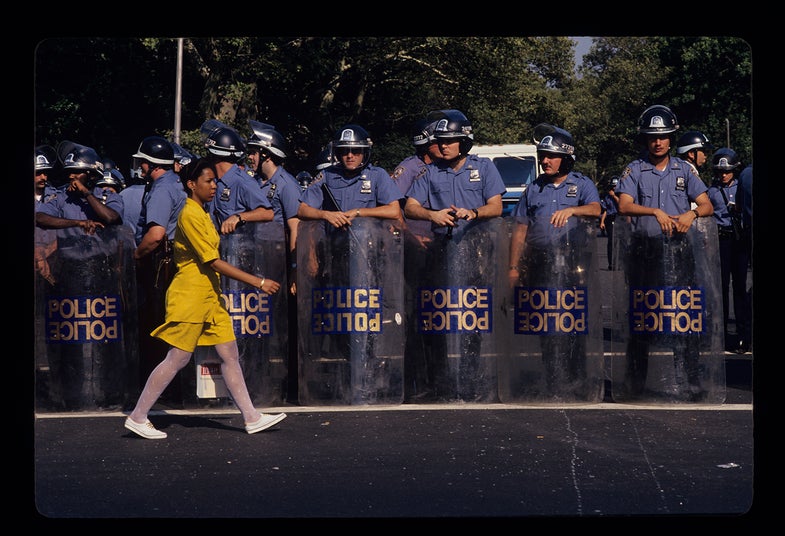 Brooklyn, 1991. A woman walks by a line of police during the Crown Heights race riots in Brooklyn. This was a three-day racial riot that occurred from August 19th to 21st and pitted African American and Caribbean Americans against Jewish residents.
SHARE

Although the exhibition, Whose Streets? Our Streets! was planned as a nostalgic—and historic—look back at two decades of activism in New York, the show feels both poignant and relevant when seen through the lens of today’s radically shifting political climate.

The seeds of the show were planted in 2014, when historian Tamar Carroll was working on her book, Mobilizing New York: AIDS, Anitpoverty, and Feminist Activity, and contacted photo editor and photographer Meg Handler about licensing some of her images.

Handler, Editor-at-large of Reading the Pictures and former photo editor of* The Village Voice*, agreed. She suggested other photographers who were worth featuring, and suggested with all of this great work, they might have a show on their hands. In 2015, they took that idea to Mike Kamber, the founder and director of the Bronx Documentary Center who agreed to house it, but recommended they broaden the scope of activism Carroll had covered in her book.

That collaboration resulted in the exhibition, Whose Streets? Our Streets!, on view at The Bronx Documentary Center through March 5. The show features more than 100 images taken by 38 photographs including Andrew Lichtenstein, Mark Peterson, Sylvia Plachy, and Les Stone, all of whom documented New York City demonstrations about AIDS, race relations, abortion rights, war, the environment, education, labor, culture wars, housing, and queer activism from 1980-2000.

The exhibition is accompanied by a website that deepens the edit of the work. As a nod to the days when activists weren’t able to communicate through social media, additional images were wheat-pasted around the surrounding blocks of the Bronx Documentary Center.

For Handler, the show was a way to look back at a significant period of time in New York City with a focus on activism, community and photojournalism; it was also a reunion of sorts with other photographers she worked with during that period (both Handler and Kamber have images in the show).

“It was more about nostalgia,” Handler said regarding how she initially imagined the show. “And putting it on the historical record and kind of assuming Hillary [Clinton] was going into office; that we would be celebrating some sort of change that all of this activity had something to do with and inspired.” 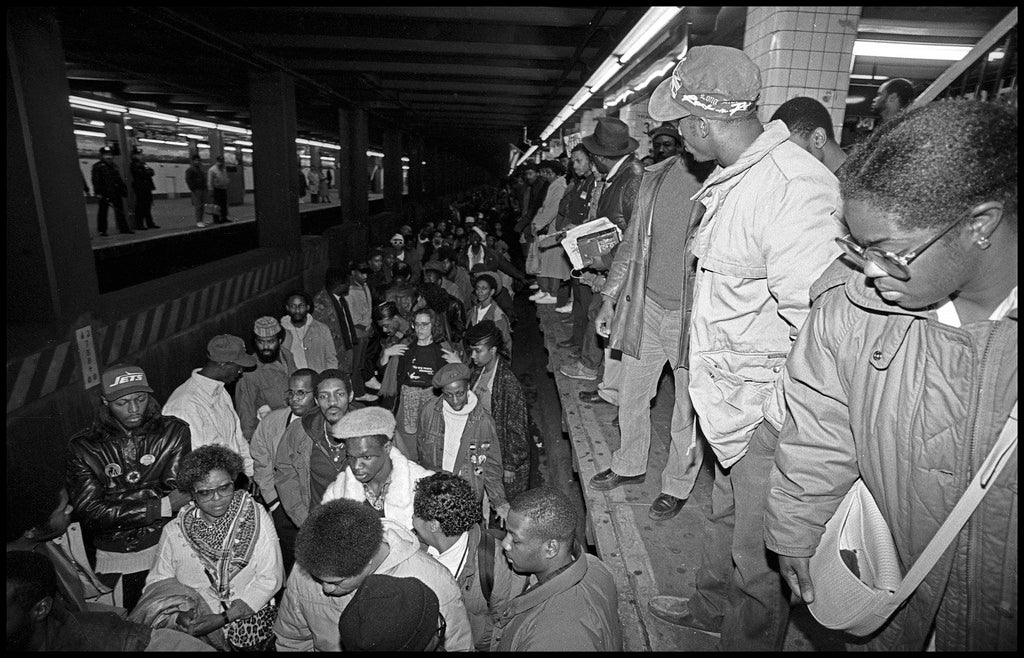 Day of Outrage demonstration at the Jay Street-Borough Hall subway station following the Howard Beach verdict on December 21, 1987 in which three defendants were found guilty of manslaughter in the death of Michael Griffith. He had been beaten and chased by a white mob onto a highway where he was struck by a car.

Carroll, a historian, had focused on progressive movements for social change in her book, and was excited to use the exhibition as a way of broadening the scope of activism to include reactionary mobilizations against racial segregation and white power

“I do look to my subjects—activists in support of progressive social change—for inspiration,” she wrote via email.

But what Handler had imagined a year and half before the show opened didn’t happen, of course. A week before Donald Trump would be inaugurated as President of the United States,* Whose Streets? Our Streets *opened. Although the point of view of the exhibition didn’t change, its message certainly did. The day after the inauguration, the poignancy of the work, and especially the title, would be echoed as millions would take to the streets in marches held around the world.

“We are entering a political environment similar to that of the 1980s in that progressives are in a highly oppositional stance to the state,” Carroll wrote. “In contrast to the 1960s when the Johnson administration’s War on Poverty was empowering and funding community activists to achieve social justice.”

Nina Berman, an associate professor at Columbia University, whose work on pro-choice demonstrations is included in the show, spoke about what the work represented within the photography community during those two decades and how that focus has dramatically shifted today.

“We all felt very connected to the struggles of the city and felt an obligation to cover them,” she wrote via email. “We were the press and we believed, I think I can say that for everyone, that our images could be influential and impactful.”

“We were essential then. If we weren’t there, there might not have been a record of the moment. Now everyone is a photographer and often protests it seems are waged in order to be photographed or shared or posted and I feel that the raw energy and the fierce politics of those earlier days is sometimes missing, or hard to decipher amid the giant media spectacle.”

A lot can be said about those two decades, not only about shift from analog to digital photography soon thereafter, but also, how activism has played out in a post 9/11 world.

“The ‘80s and ‘90s were very different in terms of access and activism from today,” photographer Thomas McGovern, whose work on AIDS activism is featured in the show, wrote via email. “We were able to get in close and gain trust from the subjects. Today’s social media make it less likely that professional photographers can do that—so many people are cynical about image makers, their motives, and the manipulative aspect of media in general.”

“The power of still photography is in its ability to make us concentrate on a single moment, and each photograph, if it’s well made, can transcend the event pictured and remind us of the bigger picture of what it means to be an intelligent human who cares, gets involved and is willing to put her/himself on the line in a public way,” McGovern continued.

With rumors that Donald Trump is considering removing the budgets for the National Endowment for the Arts, these remarks feel especially relevant. The Bronx Documentary Center noted on its website that it had been the beneficiary of a $30,000 grant as part of more than $40 million the NEA had approved for 2017; Whose Streets? Our Streets! was supported by NEA Art Works.

If those funds are removed, it’s going to be even more difficult to showcase work that is relevant to the community. Handler spoke about the significance of editing a show with the New York Community in mind; she mentioned how that also plays into the show’s title Whose Streets? Our Streets!

For Berman, it’s a triumph that the show captures the energy of that era. “I feel deep respect for people who go out on the street and put their bodies and their ideas on the line. I feel proud of myself and my colleagues for wanting to show this history and doing this often with no money, but out of need, and conviction to be involved,” she said. “I’m struck of course that most of the pictures don’t also show other photographers, something impossible today.”

Whose Streets? Our Streets! Is on view at the Bronx Documentary Center through March 5.