"This film isn’t about Jim’s death. It’s about his life." 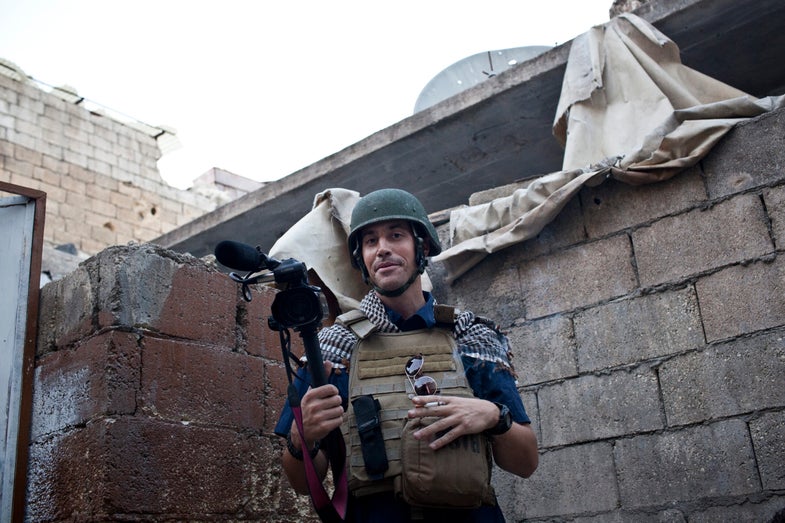 Jim in the Karm Jebel neighborhood of Aleppo, that was being heavily fought over. November 5, 2012. Nicole Tung
SHARE

Photojournalist James Foley was beheaded by ISIS on August 19, 2014. ISIS recorded the assassination on video and uploaded it to YouTube. Such a horror would ordinarily constitute the take-away moment in any retelling of Foley’s life, but Brian Oakes, director of Jim: The James Foley Story, wasn’t going to let that happen. “I wanted to reclaim that video,” says Oakes. “This film isn’t about Jim’s death. It’s about his life. If you know who Jim was, that image becomes very different, and it stops being the propaganda piece it was intended to be.” Indeed, what audiences carry away from Jim: The James Foley Story, screening at the DOC NYC film festival, is not grief but love for the man himself.

Brian Oakes was friends with Jim since high school, and he knew Jim and the Foley family well. That personal connection lights up the interviews with Jim’s parents and siblings, who relate the details of Jim’s life, and their own reactions to them, with pain, dignity, and humor.

We learn that Jim didn’t start out with a burning desire to be a photojournalist—in fact he had no idea what he wanted to do with his life. His mother describes him knocking around for a while, teaching in a public school, working with incarcerated juveniles. But while Jim might not have known his path, he always knew his goal: to live his life for others. At Jim’s memorial, his brother John confesses, “Now I get what Jim was trying to teach me. It was about getting outside yourself.”

Jim began working as a freelance journalist in March 2010, embedded with US troops in Afghanistan. In 2011 he went to Libya, where he joined forces with a contingent of freelancers working together on the cheap. Better-connected (and better-paid) journalists found the front lines too dangerous, so it was freelancers like Foley and his friends who brought back stories from the front. “It was a Mad Max type war—we jumped in trucks with the rebels while Qadaffi forces were three hundred meters away. We knew it wasn’t safe, but we didn’t turn around,” journalist Clare Gillis tells Oakes. In April 2011, Foley, Gillis, and Spanish photographer Manu Brabo were captured by Qadaffi’s forces, while journalist Anton Hammerl was shot right before their eyes.

Foley, Gillis, and Brabo were thrown in jail. They were released forty-four days later, but Hammerl’s death was a turning point for Foley, who worried that the Mad Max mentality that got Hammerl killed had been driven by macho competitiveness. So when Jim returned to a conflict zone after a restless three-month stint in the States, it was not to the front lines but to Aleppo, where he became one of the first to document civilian protests against Bashar al-Assad. Clare Gillis relates that Jim’s need to tell their story was so urgent that he would give his photographs and videos to news agencies for free, just to get it out. “Without these videos and photos, we can’t tell the world how bad it is,” Foley explains, pleading with us to understand the embattled civilians’ plight.

But eventually the populace grew wary of reporters like Jim and his colleagues. Only Al Qaeda would help them in their fight against Assad, they said, warning the journalists that the Islamists were on their way. Foley returned to the States in October to buy protective gear. He was back in Aleppo by November, with plans to be home for Christmas.

On November 22, 2012, Foley and British war photographer John Cantlie were captured by four armed men on a road in northern Syria. For a year, the newly formed ISIS kept Jim and John prisoners. Then, mysteriously, ISIS transferred them to a different jail, where they joined two dozen other journalists from around the world. Sharing a cell, these men became each other’s family. They celebrated Christmas by saying nice things about each other. Eventually, one by one, the other journalists were released as their governments negotiated for their freedom, until only Jim and John remained.

In the film’s most moving sequence, Oakes powerfully re-creates Jim’s last ten months in jail by interviewing the journalists who were incarcerated with him. All describe Jim as a selfless leader who made sure they survived: He gave away a precious pair of pants so that a colleague could stay warm; he procured a package of dates for the group even though it cost him a beating; after a night of torture, Jim, broken and bleeding, turned to his injured cellmate and whispered, “Are you OK?”

As Oakes intended, Jim: The James Foley Story overpowers ISIS’s video in our imaginations. The film doesn’t change the fact of Jim’s death, but, by creating a loving image of his life, it eviscerates ISIS’s intent.