An open-air exhibition shines light on the global water crisis 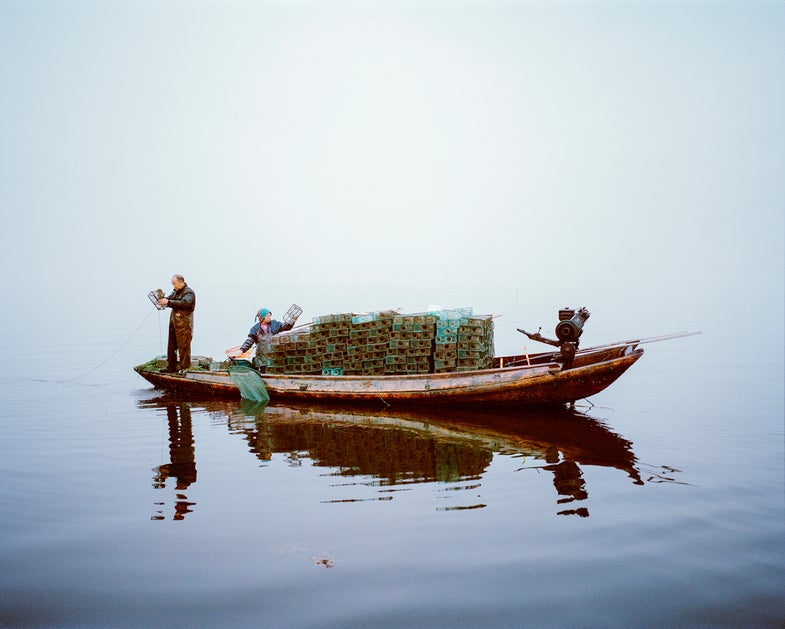 Although poems and stories about Lake Hong’s purity are enshrined in Chinese cultural history, it has been damaged by unsustainable ﬁshing practices. Over the past 14 years, WWF, its partners, local communities and government have helped to restore the lake, demonstrating how sustainable ﬁshing methods can result in healthy ﬁsh, reduced pollution and clean water. © Mustafah Abdulaziz/ WWF-UK Mustafah Abdulaziz is an American documentary photographer based in Berlin. His on-going project ‘Water’ has received support from the United Nations and VSCO. In 2012, he was named one of PDN’s 30 Emerging Photographers to Watch, and is the winner of the Syngenta photography award, 2015. Mustafah is working with WWF, WaterAid and Earthwatch to document images and stories highlighting the global water crisis. These powerful images form the Water Stories photographic exhibition supported by the HSBC Water Programme. The exhibition will open in New York to coincide with Photoville, 21 September 2016, and will be on public display by the East River in DUMBO throughout October. The exhibition adds previously unexhibited images from Mustafah's shoot in New York this summer. Water Stories first launched in Stockholm to coincide with the 25th anniversary of World Water Week and Stockholms Kulturfestival in August 2015, and was also shown in London to mark UN World Water Day, in March 2016. CHINA China is predicted to become the world’s largest economy, and the pressure that its rapidly expanding industry puts on the natural environment is expected to grow, too. As China develops, and as its overseas investments lead to increasing impacts in other countries, its choices will be pivotal for the future of our planet. It is possible that development in this vast country could result in China becoming a global leader in renewable energy and clean technology. The situation across the vast Yangtze River basin is a prime example of China at a crossroads. The 1.8 mi.
SHARE

At night, Water Stories, an open-air exhibition by Mustafah Abdulaziz on-view in New York City’s Brooklyn Bridge Park through October 12th, is particularly haunting. It features nearly 70 photographic lightboxes that illuminate the park grounds and the banks of East River.

In the dark, faces from China, Nigeria, and Pakistan gaze out at the still water and the iconic Manhattan skyline. With his installation, Abdulaziz attempts to bring the banks of the Ganges, The Carandiru, or The Yangtze close to the New York waterfront. And in doing so, he encourages his viewers to contemplate the accessibility of water, one of our most important resources, and to consider that this resource is limited. In fact, the United Nations has projected that by 2030 our planet will face a 40 percent shortfall in water supply.

“Water serves such a beautiful function,” explains Abdulaziz. “It is both literal and conceptual. It is present in every aspect of human development from the biological to the mystical to the religious. Water shapes our cities, our aqueducts, and our lives.”

Abdulaziz grew up in Bedford-Stuyvesant, Brooklyn, and lived in the United States until he moved to Germany in 2011. Although he says he has no formal training in photography, his interest in the medium developed early. He recalls spending hours in the library as a teenager poring over books and looking through images. When he picked up Richard Avedon’s In the American West, something clicked; he realized that photography could be a journey and an experience. He also knew that he wanted to use photography to explore and comment on the world.

“I felt like photography was an offering,” says Abdulaziz. “It was an offering and challenge. I looked at these works by Avedon and Winogrand and all these guys who spent their time on the street talking to people, interacting with people, getting things thrown at them, making prints in darkrooms, and talking to museum directors about their ideas. I thought this is insane. This is the exact way that I want to see life.”

Abdulaziz received his first grant in 2012 to photograph the cholera outbreak in Sierra Leone. Since then, he has visited nine countries and made thousands of images that document human relationship to water.

His New York exhibition includes images from six countries: China, Nigeria, Brazil, the United States, Pakistan, and India. Viewers can see Nigerian women waiting to collect water from a hand-dug well, the brittle ground of the Cantareira Reservoir after a drought in Brazil, and an aerial view of Manhattan—a small island surrounded on all sides by water. His photographic installation leads viewers from intimate portraits, like the one of Orwau Nyam, a Nigerian farmer, to large-scale views of endangered landscapes.

Abdulaziz explains that his strategy here is to photograph water as well as the people and landscapes impacted by the water crises. In this exhibition and its startling proximity to New York’s East River, viewers are reminded that water is, indeed, a source of life, and that the world water crises is both a global and individual problem.

Water Stories is the result of a collaboration with the HSBC Water Programme, a partnership between HSBC, Earthwatch, WaterAid and WWF, and presented as part of the festival Photoville, in Brooklyn Bridge Park. It is on view through October 12th.