Monica Lozano’s enigmatic and haunting photographs ride the line between traditional art photography and reportage. But for this native of... 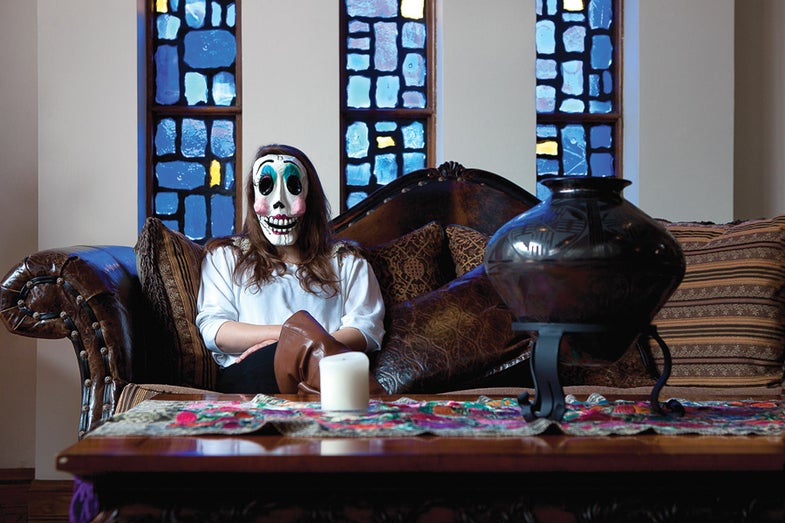 Monica Lozano’s enigmatic and haunting photographs ride the line between traditional art photography and reportage. But for this native of El Paso, Texas, who grew up just across the border in Juarez City, Mexico, blurred boundaries are just part of everyday life.

“Having been raised in a border town really gave me a unique perspective; it exposed me to a wide range of experiences from early on,” notes the 31-year-old photographer, who recently completed a Photo Global residency at New York City’s School of Visual Arts (SVA). “There are huge contrasts in the population, but no real separations. There’s an incredible visual mix: the vivid colors of Mexican culture, and then in the U.S. everything becomes neutral, like the colors of the desert. Many people come to Juarez to try to cross over, and those who don’t make it stay there and make a life there. You’re exposed to extreme things that just seem normal.”

Juarez is where Lozano made her first picture, a Polaroid, at age 9. She studied graphic design and visual arts in Monterrey, Mexico, and early in her career worked as a graphic artist for a television station in Minneapolis. “It only took a few months before I knew my calling was behind a camera,” she recalls. Around 2008 she moved to Madrid to study fashion and commercial photography. “I was still trying to find myself and decide which avenue to pursue,” she says.

Then her path found her. Encouraged by one of her instructors to apply for the prestigious International Talent Support (ITS) photo competition, Lozano thought of using her native Juarez as a subject. Coincidentally, her mother had recently sent her a newspaper clipping about a man who had attempted to cross the border hidden in a car seat. It was a common story for the region—one of the prime crossing points for illegal immigration into the U.S.—but the haunting newspaper image of the disassembled car seat with a man embedded in the stuffing struck a nerve with Lozano, and her Borders series was born.

Compiling her research over several months from newspaper items, online stories and even Facebook posts, Lozano began contacting her subjects and persuading them to share their stories: a man who had hidden inside a mattress, a girl who’d floated down a river in a car tire. Carefully restaging each incident as a spare tableau, Lozano used her Hasselblad H3D with a P25+ digital back to chronicle small details, resulting in bold but elegant images with a surreal edge. “I wanted to decontextualize the stories from what we’re used to seeing, the usual six o’clock news replete with sensationalism, drama, fear and violence,” she says. “I wanted to dignify my subjects, voice their stories, but in a different way that cut through the fear.” The resulting suite of images took the top ITS photo prize in 2009, garnering Lozano international exposure and exhibitions, including one—in keeping with the theme of crossing borders—at the Munich Airport.

Now based in New York, Lozano continues to refine her craft, pursuing fine art projects as well as commercial avenues and developing her already keen instincts. But even from a distance, her hometown remains a constant source of inspiration. It provided source materials for her newest series, Juarez (top), which was met with acclaim at an SVA/New York Photo Festival exhibition in 2011. Once a bustling border town, Juarez has changed drastically over the past decade. It’s now marked by violence, including the disappearance of thousands of young female workers and bloody territory disputes by warring drug cartels. An oppressive cloud has settled over the region, a palpable change that Lozano could not help but note on her last trip. “I really wanted to capture the current state of the region—the pain, the killings, the complex situation,” she says. I found an element in Mexican culture—the mask of the Day of the Dead celebration that portrays beauty in death. A lot of my subjects wanted to hide their identity for security purposes, so the masks were the perfect vehicle to capture real people in real scenarios while protecting their privacy.”

The eerie portraits, captured on a Canon EOS 5D Mark II digital SLR, chronicle friends and acquaintances attempting to get on with their lives against a grim backdrop. There’s a lyrical stoicism to this work that for Lozano reflects the spirit of the region. “Life continues in Juarez despite all the violence,” she says. “These are people with strength. They stay and fight and continue. I admire their love for the land.”