The work is currently on view at Staley-Wise Gallery 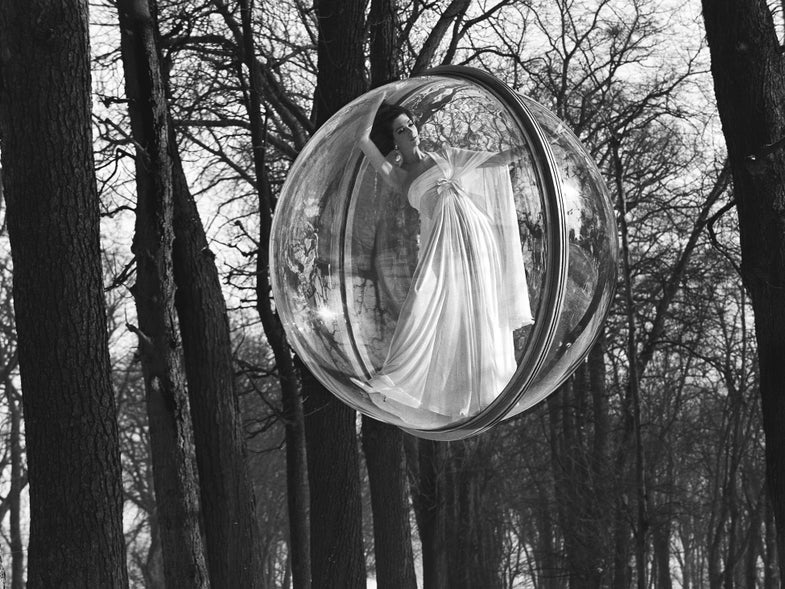 It’s odd how often great photographers with huge bodies of exceptional work can become know for a single iconic project. Think Bert Stern and Marilyn Monroe. A similar thing happened with Melvin Sokolsky and his bubbles.

Sokolsky, whose fashion photography is currently the subject of a memorable exhibition at New York’s Staley-Wise Gallery, was born on Manhattan’s Lower East Side in 1933 and began working in the 1950s during one of fashion photography’s golden ages. Competing with the likes of Stern, Richard Avedon, and Irving Penn, he was taken under the wing of Harper’s Bazaar design director Henry Wolfe and made a staff photographer in his early twenties. Sokolsky went on to a prolific bi-coastal career in advertising (still and TV), editorial portraiture, and fashion photography that continues almost to this day. (He shot a Harper’s Bazaar feature that focused on actress Jennifer Aniston in late 2014.)

Titled “The Paris Pictures,” the Staley-Wise show that runs through April 18 centers on two Sokolsky assignments for Harper’s Bazaar that focused on the Parisian spring collections of 1963 and 1965. The two resulting, half miraculous sets of pictures, almost guarantee something that his 25 Clio Awards for excellence in advertising photography may not: a secure place in the pantheon of the world’s great fashion photographers.

In late 1962, the photographer received a call from Bazaar editor Nancy White inviting him to shoot what Saint Laurent, Nina Ricci, and other designers would present at the next year’s spring shows. A few days later, Sokolsky proposed something outlandishly ambitious: his series of photos would present a model in haute couture floating above Paris in a Plexiglass bubble. (This was, of course, decades before Photoshop would make the scene.)

To get Harper’s to agree to it, in a matter of weeks, Sokolsky had the Plexiglass bubble built, hired a crane, and used aircraft-grade cabling to suspend it over the cliffs of Weehawken, New Jersey. With Manhattan in the background, a high-paid fashion model posed (safely) inside the bubble dressed in couture that probably cost more than the crane. When the Bazaar editors saw the resulting test shot — it’s the color picture shown here—the assignment was his.

“On January 20, 1963,” Sokolsky writes in notes for the show, “my team and I flew to Paris… The telescopic crane we hired drove up to the designated [meeting place], followed by a small van. Its rear doors opened to reveal the bubble nestled in its cradle. Guy, the crane operator, then lowered the cable…and the bubble was suspended a few feet off the ground. It was hinged at the top like a Fabergé egg for easy entry.”

Over the next several weeks, his crew ferried the crane through the streets of Paris—sometimes followed by police who were trying to shut the project down for want of proper permits—to ultimately produce eleven stunning photographs that ran in the March 1963 Harper’s Bazaar and are still fascinating viewers today.

The reasons that they still have an audience extend far beyond the ambitious bubble conceit. The model Simone D’Aillencourt, whom Sokolsky hired after extensive test shoots and auditioning, managed to strike astonishingly elegant and intriguing poses, despite the absurdity of the situations. Her poetic body language, alluring femininity, and engaging facial expressions—always different and spot on commensurate with the implied narrative of each constructed situation—contribute to the series’ success. Her unflagging glamour clearly served as a constant source of inspiration for Sokolsky, and he frequently attributes her contribution as essential and indispensable to the project’s success.

Paris was too. Each of the backgrounds are distinctly Parisian, while never bordering on the cliché. They showcase his eye for picking locations rich with the distinct charms of the city’s parks, street scenes, architecture, interiors, even rooftops—always lending something exotic, but never so compelling that they distract from the fashion. Speaking of which, the timeless beauty of most of the haute couture on display also adds indisputably to the project that is now known by many simply as “Sokolsky’s Bubbles.”

Paris had Sokolsky in its sway, and two years later he returned for another spring collection. These pictures collectively known as “Fly” are also on view at Staley Wise. They feature a single model (Dorothea McGowan) suspended above Parisian scenes as if in flight. No bubble this time, but in the wake of “Bubbles,” this second project earned a great deal of buzz. Famous surrealist Salvador Dali appeared on set, for example, demanding that “Sokolsky, make Dali fly!”

In addition to its stunning, beautifully printed black-and-white photographs that range in size from 11×14 to 50×50 inches, The Paris Pictures includes shots of several working sets and a filmed sequence, both revealing the wizard behind the curtain, furiously at work. For technical types, these make the show worth a visit as well.

“The Paris Pictures” will be on view at Staley-Wise Gallerythrough April 18.