We wrote about Michael Jang at the very dawn of this site, when we presented his work “Summer Weather,” which... 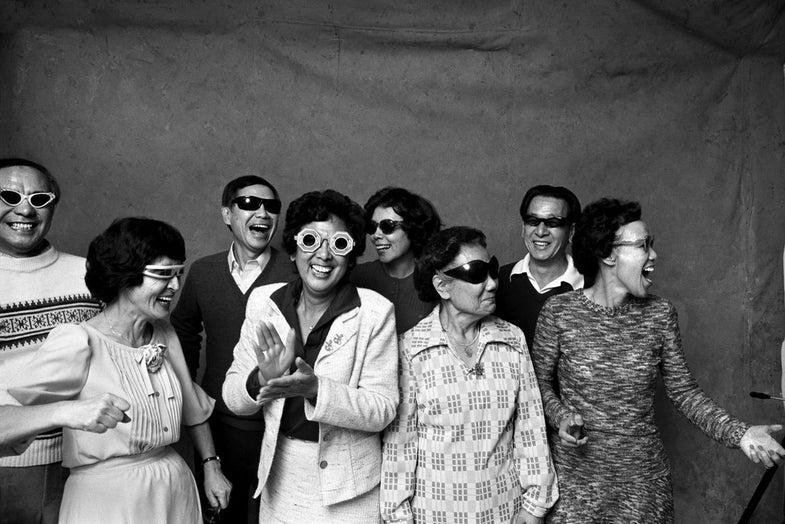 We wrote about Michael Jang at the very dawn of this site, when we presented his work “Summer Weather,” which went on to win recognition from Aperture at last year’s Paris Photo. Over the past weekend, Jang’s work was back at Paris Photo, except it was at the Los Angeles version of the fair, and it wasn’t “Summer Weather,” either. Jang was presenting a different work, “The Jangs,” which is the subject of a new solo show at San Francisco’s Stephen Wirtz Gallery, opening up tomorrow and on until July 13. At first glance, there are a couple of similarities between “Summer Weather” and “The Jangs”—both works are in black and white, they’re both humorous, and they were both shot more than 30 years ago—but they are, for reasons that will become obvious, quite different. While “Summer Weather” only became a body of “work” after Jang discovered it by chance a few years ago, there’s nothing accidental about “The Jangs.” Make no mistake: Jang has been sitting on this work for decades, waiting for the right time to push it out into the world. Safe to say it’s worth the wait: this series distills some of the best parts of American photography in the 1960s and 1970s into a single work that, for all of its formal beauty, is first and foremost a personal document. 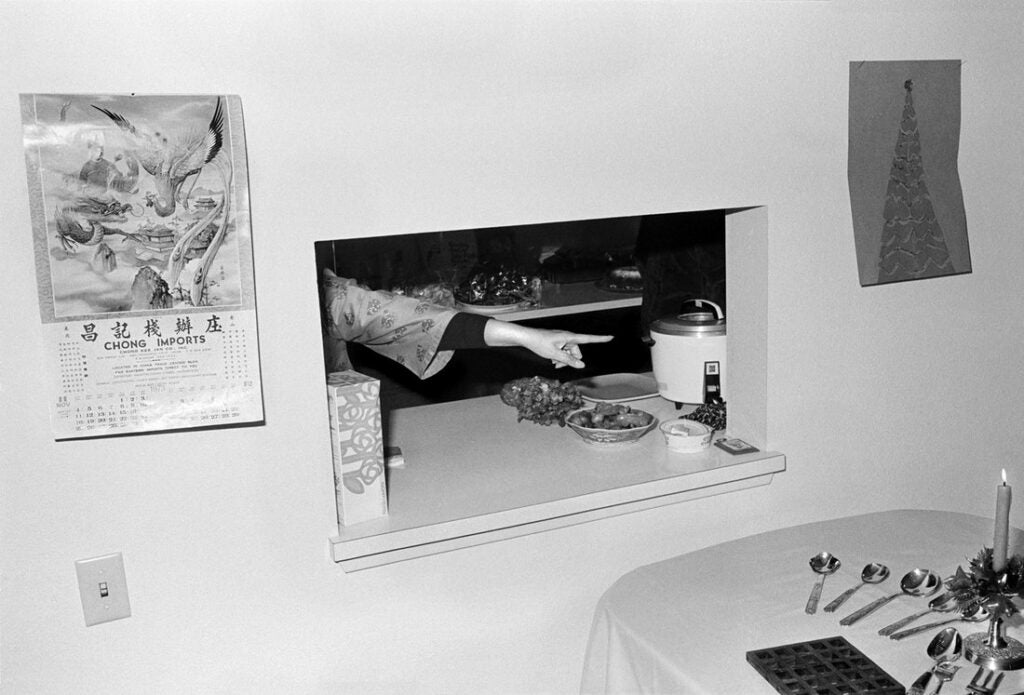 As you might have guessed, the subject of this series is Jang’s own family; as a result, many of the photos were shot at home. Some images, such as the photograph of a disembodied hand pointing out of the kitchen, are models of excellent composition. Other images, like a goofy group portrait in which everyone is wearing glasses and having a laugh, are a bit looser. Still, a remarkable number of these photographs work both as carefully-selected “photographs” and also as simple “snaps” documenting a family. In other words, I can understand why these photographs have value as “art objects” (the work is already in the permanent collection of SFMOMA) but I can also imagine them sitting in a family album.

The image of the family sitting around reading on the sofa works particularly well in this way for me. On the one hand, it’s a well-composed image, and the way that Jang’s sibling is turning his head provides a pleasant contrast to the covered faces of everyone else. Formally, it’s exactly like what we’ve come to expect from the great American street photographers of the day. But I’m guessing that when Jang looks at this photo, he’s thinking more about the magazines his family used to read, or the taste of the snacks left out on the table. 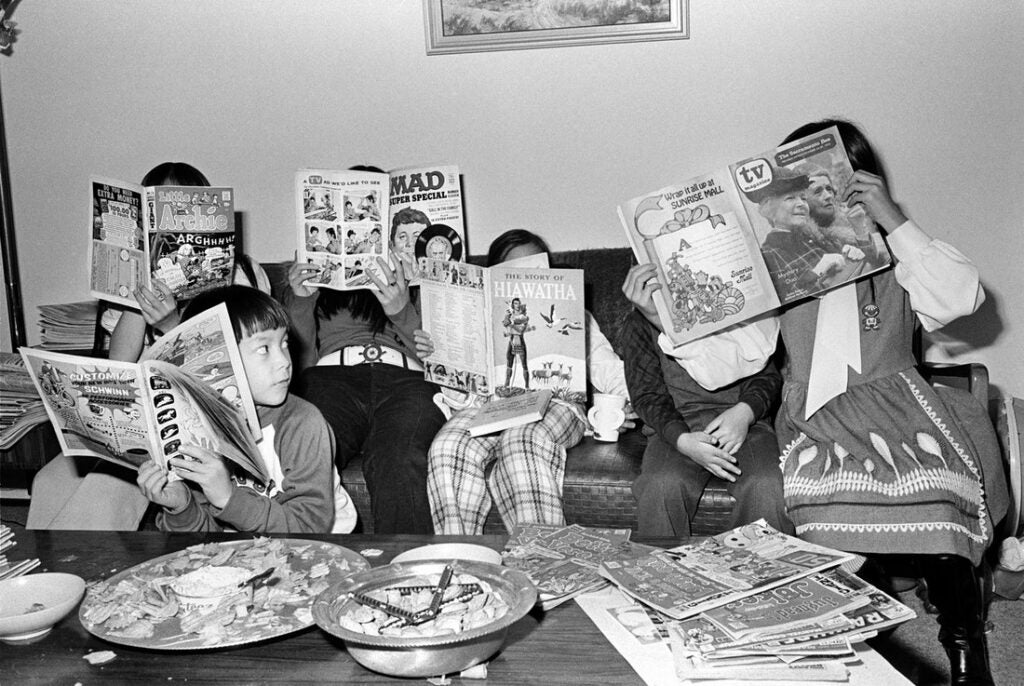 So there’s no need to over-theorize these photographs, especially considering the time they were made. In 1972 and 1973, when Jang shot this work, he was a student at Cal Arts. This was the heyday of shooters like Lee Friedlander and Garry Winogrand, and Jang references this pair as an influence. “I remember liking Lee and Garry’s approach because they weren’t heavy into any art theory—they just seemed happy to shoot and shoot. I spent less time in the darkroom and more time on the streets.”

It’s pleasing to see the way that Jang has incorporated a light tone into his photographs without sacrificing anything as a photographer. Jang himself notes that “it’s hard to think of any major photographers who did humorous work and were taken seriously.” I’ve always thought that being unseriously serious (or seriously unserious, either way) is a great goal for photographers, and I think it’s possible to see some of this attitude in “The Jangs,” where we are privy to some occasionally goofy moments. Even so, while some of these photographs are light-hearted, there is a weightier, unseen element to the work, which Jang mentions only in passing by noting that “if you had a last name like Jang and were seeking an art career in the early seventies, it was going to be an uphill battle.”

I’d like to end by considering Jang’s self-portrait. To me, this is one of the most striking photos in the series. Jang has stuck out his arm and come away with what is, plain and simple, a Friedlanderesque moment of absurd luck. He’s managed to frame up his own body perfectly with five others, but I’m only so interested in talking about the composition of this photo. It’s perfect, what else is there to say? I’m more interested in Jang’s expression. He’s standing on a corner in San Francisco’s Financial District, looking quite dapper in his suit and shades. Of course he wouldn’t have had any idea that, 40 years on, this photograph would hang in a gallery just a few blocks away from where he was standing. But as he looks back at the camera, he’s giving a slight smile, as if to show—at least to this mute machine—that he is confident in himself, as a photographer or otherwise. The word “California” looks on. 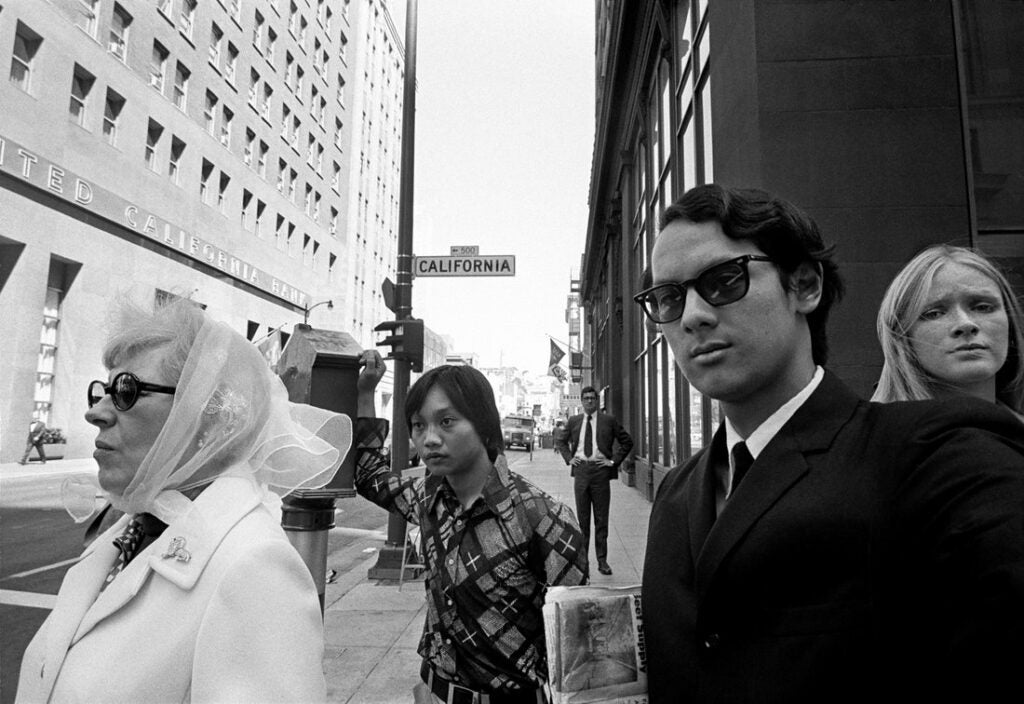