The most magical part of childhood is the ability to live in the imagination. Providence, Rhode Island, and New York … Continued 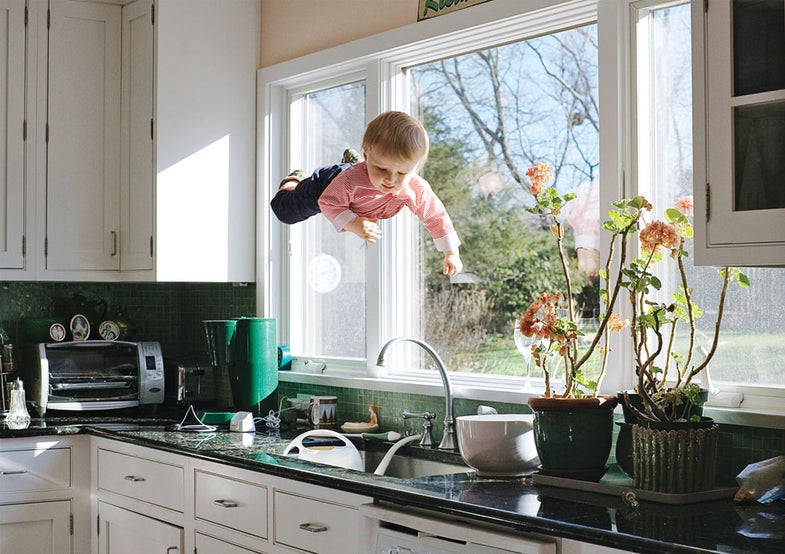 The most magical part of childhood is the ability to live in the imagination. Providence, Rhode Island, and New York City–based Rachel Hulin often draws on her early fantasies of levitation for her editorial and commercial photography. But the inspiration for her new children’s book, Flying Henry (powerHouse Books, 2013), came mostly from her son. In 2011, Henry, then 6 months old, loved being held aloft and sailed around the room. After photographing this a few times, Hulin was struck by how much it appeared as if he were caught in his own experience, floating apart. “It was an allegory for how he seemed so in his own world,” she explains. “I was always trying to figure out what was going on in his mind.”

She began staging shoots of Henry in flight, using a tripod and self-timer as she (and occasionally, her husband, David) held him. The photo sessions usually took 10 minutes, netting five shots of the background and five of Henry before he lost interest. She composited the images and erased the adults in Adobe Photoshop. Encouraged by positive responses from friends and colleagues on Facebook, she pitched the photos as a children’s book. But crafting a storyline was tough going for Hulin. “I knew where Henry’s adventure started—in the home—but I wasn’t sure where it would end,” she says. After making images at home, she devised trips to a topiary garden and a zoo during a Halloween festival: life for a floating baby truly in the outside world. The book’s conclusion—Henry realizes that the world is much more fun to explore with friends—was captured with the help of the smaller guests at David’s 35th birthday party.

The image here was taken in David’s parents’ kitchen when Henry was about 10 months old. “It’s a solitary, quiet moment—the light when it comes in during the afternoon is beautiful,” Hulin says. “This is the moment where nothing in the kitchen is quite within his reach. It’s when he decides to fly off and have all of these adventures.”

From Flying Henry by Rachel Hulin, published by powerHouse Books.