Meanwhile, In Space: A Hurricane On Saturn

NASA’s Cassini-Huygens probe has orbited Saturn since 2004. In terms of photographic output, it’s a frequent stunner, due in no... 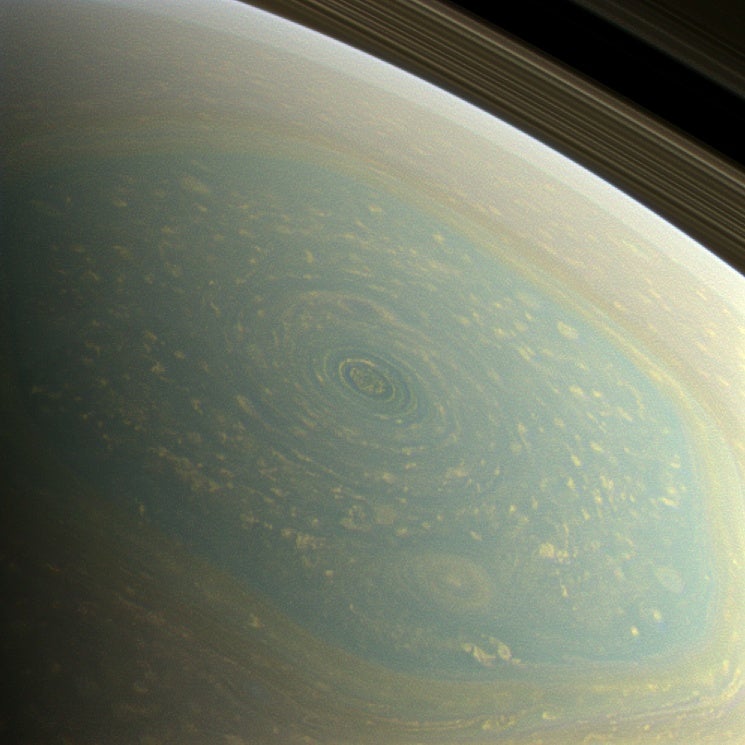 NASA’s Cassini-Huygens probe has orbited Saturn since 2004. In terms of photographic output, it’s a frequent stunner, due in no small part to its subject planet and its dramatic rings.

But today’s release is especially alluring. For the first time, the craft has photographed a mysterious hurricane at the planet’s north pole.

Above is a true-color image (generated, like most color satellite images, by combining specially filtered red, blue and green wavelengths). And below, a dramatic false-color image that adds an additional layer of scientific information: clouds colored green are at relatively high altitudes, compared to the low clouds colored red.

While their purpose is almost entirely scientific and their capture computer-controlled, I like to view satellite images from space in context of their human creators. If you think about it, what Cassini’s operators are doing to collect these images is hardly different from the work of a famous aerial photographer here on Earth like Yann Arthus-Bertrand, or even Edward Burtynsky, using a camera mounted on an unmanned drone aircraft. It’s just done from quite a bit further away.