Echoing generations of landscape photographers, Matthew Brandt says, “What makes nature such a compelling subject is that it’s truly inexhaustible.”... 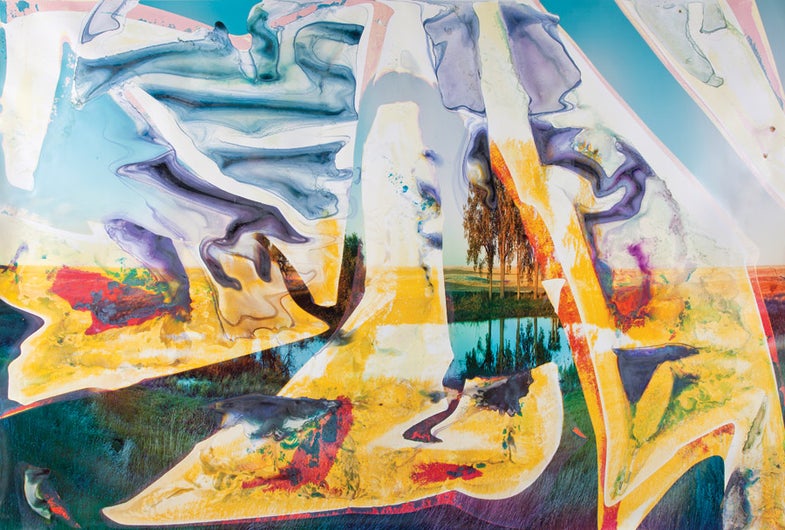 Echoing generations of landscape photographers, Matthew Brandt says, “What makes nature such a compelling subject is that it’s truly inexhaustible.” The 31-year-old Los Angeles–based artist has explored the natural world and its disruptions over the past few years, most prominently in his series Lakes and Reservoirs. These landscape photographs are bathed after printing in solutions made partly of water collected from the source he’s depicting. Brandt has incorporated the material of his subjects into images ranging from bees to trees to demolition projects near his studio.

If experimenting with the processing and surfaces of photographic prints seems like a relic in the digital age, it’s far from it. If anything, today’s predominance of screen-only interaction has made the importance of the photo as object more beguiling to both emerging and established photographers. Von Lintel Gallery in New York City held a show last spring organized around such an interest. Titled Unique, the group show featured photographers including Brandt who explore the material process of image-making. Gallery director Amy Sande-Friedman says that the artists in the show tended to work physically with their photographs when they used natural subjects.

“There’s a renewed interest in hands-on types of work,” Sande-Friedman says, citing Klea McKenna’s photogram series Rain Studies, the chemigram-based work of Amanda Means, and the traveling camera obscura of John Chiara. “When we increasingly use the computer to mediate between ourselves and the natural world, there’s more desire to engage with it directly. These artists are interested in really getting inside nature—both in organic imagery and working with nature as an idea.”

Brandt’s work on Lakes and Reservoirs extended in part from experiments with salted-paper printing, but he says chemistry was more a road to an idea than the idea itself. He was also inspired by a popular story that the British landscape painter J.M.W. Turner had himself strapped to the mast of a boat in order to experience the full force of a gale before painting it. “It’s having a fuller understanding of nature when working with it,” Brandt says. Watching the way that lake water degraded print emulsions gave him a broader sense of the process of natural erosion.

As he continued to develop his technique, Brandt found that he was getting results that, much like erosion itself, were controlled yet unpredictable. “I like the idea of guiding, assisting,” Brandt says. “When things end up being overly controlled, you can tell that it lacks gesture.”

Since his lake-water experiments, Brandt has incorporated a range of natural phenomena into the photo-making process. For his series Honeybees—conceived in 2007, when he began noticing masses of bees dying on a local beach from colony collapse disorder—Brandt photographed the insects and used their carcasses in the emulsion for his prints. In a more recent series, Night Skies, he applies cocaine directly to black photographer’s velvet then sandwiches the image between plates of clear glass.

And Brandt’s heliographs of the La Brea Tar Pits—stemming from the first-ever permanent photographic process of 19th-century inventor Joseph Nicéphore Niépce, which involved hardening an asphalt derivative on pewter and washing away certain areas with lavender oil—make both the substance and capture of his subject part of the unique final images.

Smoke Screen
Interacting with nature in the process of making an image can be intensely personal. In her six-year series The Burn, Evanston, Illinois–based photographer Jane Fulton Alt shadowed restoration ecologists to capture images of controlled prairie fires, a subject she first encountered in 2007 during an artist’s residency at the Ragdale Foundation in Lake Forest, Illinois. Witnessing a controlled fire on the grounds there, she photographed it, collected some ash, and asked some of the ecologists involved if she could follow them for a shoot.

Alt’s first trip out the following spring had a greater significance: It coincided with the birth of her first grandchild. It was also her sister’s first day of chemotherapy treatment for ovarian cancer. When she looked through the viewfinder, Alt says, “I was thinking about the parallels between the burn on the prairie and the burn going on in [my sister’s] body. For me, it became a whole parallel universe and process and a way of trying to understand the life cycles.”

The ensuing series, which recently concluded and which is being released in October as a book (The Burn, Kehrer Verlag), was as much about the images as it was about focusing on that connection, which sustained Alt throughout her sister’s battle with the disease. “They became much more subjective pictures than they would have been if I had simply documented the burn,” she recalls. “I shied away from shooting the fire—it felt too violent, and I was more interested in the ephemeral quality of the smoke.” The images focus instead on its obscuring, destructive, and regenerative properties.

Photographically, The Burn was also an extension of Alt’s earlier work altering image surfaces with beeswax to add luminosity to prints of natural subjects. The smoke, she says, “was the first time I’d found that luminosity in the subject of the print itself”—and while she was satisfied with uncoated prints for the book and exhibitions, on individual prints for custom copies of the book she applies coats of beeswax to add depth.

The shooting experience was both intense and strangely soothing, especially as she returned to it repeatedly over time. While the restoration ecologists Alt trailed were careful to keep her out of danger, she found herself nevertheless compelled toward the hot ash, making images, coming home with her clothes and equipment blanketed in soot. For Alt, it was as much about being immersed in the physical environment as it was about capturing final images—having the tangible experience of natural burn and regrowth helped her to tie the idea for the series into a broader idea of both ecological and human life cycles.

Her sister died of her disease, but Alt found that having worked with controlled fires as closely as she had enabled her to cope in a way she otherwise might not have. “I was able to focus on the loss within a larger idea of regeneration, the idea that new life comes out of things that die or pass away,” she says. The work is dedicated to her sister.

Constructive Destruction
For Australia-based Odette England’s project Thrice Upon a Time, working with the material of the landscape was literally tied to the land itself. England focused on the terrain of her childhood home, a 200-acre farm in the small settlement of Ponde in South Australia, by a two-step process: a 2005 journey (before conceiving the project) to capture the location on film, and a 2010 return by her parents, who re-trod the area with the processed negatives attached to the soles of their shoes.

For England, the concept of having the film “work the land” related to how her parents physically worked the land when she was a child, before the threat of financial troubles forced her family to leave in 1989. “Living on a farm not only ties you to a specific economy, but also to seasonal rhythms,” she says. “The farm has changed hands four or five times since then, and with each passing year and new owner, I can’t help but feel that the farm dies a small death.”

England relocated to a nearby rural area as an adolescent and later would often drive past the farm; it wasn’t until December 2005, returning with a medium-format Hasselblad film camera, that she captured it. She processed the film and held onto the negatives but wasn’t sure what to do with the project. In 2010, while living in Providence, Rhode Island, she ran across the negatives and began experimenting with them on a lightbox—scratching some, cutting others, burning a few. “It was cathartic and horrifying, but I was enthralled,” she says.

Feeling more directly connected to her childhood memories of love versus loss, England ultimately came upon the idea of her parents’ revisiting the farm: “traversing it on my behalf—looking for locations of where they’d taken snapshots of my brother and me as children,” she says. Over six to eight months, her parents took numerous treks, each time with three to five negatives taped to each shoe. Some came back relatively intact, others in fragments; England turned them into large-scale pigment prints.

Ultimately, she says, photographing the farm wouldn’t have made sense without a material connection—what had been lacking in her memory was that physical relationship. “It was an urgent thing to understand this particular patch of dirt,” England says. “It was the material that made me.”