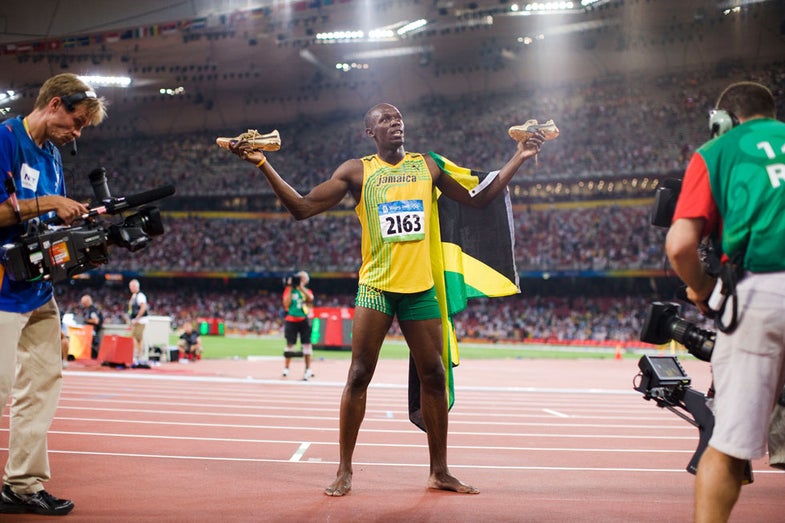 After 20 years covering the Olympics, Mike Powell says that now he focuses more on nuanced moments and atmosphere. That’s evident in this shot of Usain Bolt just after his historic 100-meter win in 2008. “A classic sports photographer would have cropped out the TV cameramen,” Powell says, but he wanted to show what the moment was really like on the track. “I got lucky with a fan’s strobe going off in the crowd. It adds depth and almost feels religious. It’s a beautiful piece of flare.”

Fair or not, videographers often get first dibs on choice spots at the games, with still photographers relegated to second-class status. While some shooters get frustrated, Mike Powell stayed frosty. On the morning Phelps was due to swim for his seventh gold, “I brought a tray of Starbucks and got to be good mates with the TV guys,” says Powell. “There were no official positions and room for only one or two people to stand at the best vantage point.” The cameramen allowed their new best friend to slide in and, says Powell, “I wound up getting the shot of Phelps tying Mark Spitz’s record.”

Shooting the Olympics is usually about capturing individuals, but some moments have pure aesthetics too good to turn away from. “I shot this in the velodrome. I was going for a graphic image that would look like a painting,” says Mike Powell. “I panned with a wide-angle lens, and it took a lot of goes to get this. I must have taken 50 images, and most of them are garbage. This represents a small moment where everything came together.”

_We’ll be continuing to feature some of the Olympic Games’ most iconic photographs, and the stories behind them, throughout the London 2012 games. See more here. _