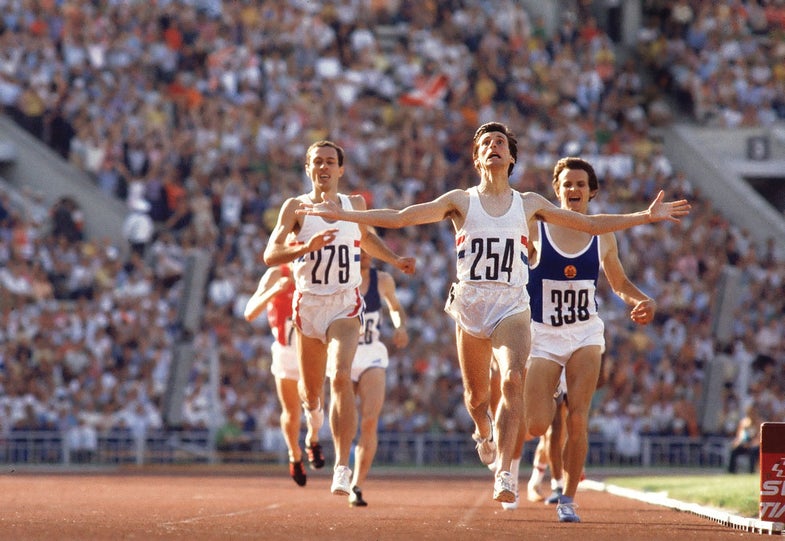 The Olympic Games aren’t just the ultimate sporting contest—they’re the ultimate proving ground for sports photography. Nowhere are there more elite athletes in one place, nowhere are your odds better for catching a world record being broken, and nowhere is the contrast between still and video coverage so stark. Throughout the 2012 Games in London, we’ll be taking a look back at some of the Olympics’ most iconic photos and photographers. Also, see even more Olympic photo coverage by our friends at PopPhoto.com

Sebastian Coe crosses the finish line of the 1,500 meters at the 1980 games in Moscow. This famous shot is a rare example of remote photography from that era. To avoid the crush of the photo pool, Heinz Kluetmeier got in early to set up. “They didn’t let photographers in until later in the day,” he says. “I had a Russian kid help me to get in through an employees’ entrance.” His remote in place, Kluetmeier was able to shoot from two places at once.

For Michael Phelps’s attempt to bag his seventh gold (part of his quest for a record-setting eight gold medals) in Beijing, Heinz Kluetmeier got to the pool two days before the 100-meter butterfly to install remotes on the bottom of the pool below lanes four and five—a key spot whether Phelps won or lost. His motor drive captured the last seven yards of Phelps’s race, including something fans at home couldn’t see. “From the penultimate frame to the last frame, Michael went from losing the race to winning the race,” says Kluetmeier.

_We’ll be continuing to feature some of the Oluympic Games’ most iconic photographs, and the stories behind them, throughout the London 2012 games. Stay tuned. _