What do you do when the subject of your long-term portrait project asks you for $30 to buy heroin? That … Continued 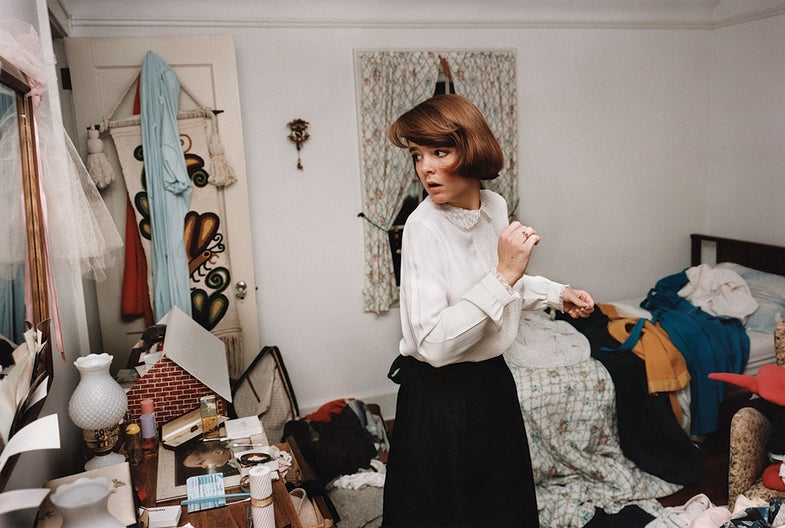 What do you do when the subject of your long-term portrait project asks you for $30 to buy heroin? That was the question Tony Fouhse faced from Stephanie, a sometimes prostitute, all-the-time addict whose downfall and eventual recovery Fouhse documented in photographs over the course of eight months.

Fouhse had spent four years photographing the addicts who gathered on a single block in Ottawa before he encountered Stephanie, a thin 23-year-old with a shocking intensity in her eyes. He took a few frames, and when he returned the next day to give her some prints, he took a few more. Each found something in the other—for him, an extraordinary subject, and for her, a man who was interested in her for something outside of paid sex. But as they grew closer, the project and the friendship merged, and the moral dilemmas began to pile up.

In the car that morning, with Stephanie sick from withdrawal in the passenger seat, Fouhse figured the situation boiled down to three choices. He could give her the money, and she would use it to buy heroin and feel better, perpetuating the addiction cycle. He could deny her the money, knowing well that she would find it in another, more dangerous way, most likely prostitution. Or he could abandon the project—and Stephanie—entirely.

“Over and over, this project put me into a place where anything I decided was wrong, and I had to choose between the least of three evils,” Fouhse says. “Not a day went by when I didn’t wonder if what I was doing was for the project or for her.”

These sorts of moral challenges are uniquely faced when photographers choose their own intimate relationships as subjects or when relationships grow out of long-term projects. But for artists hoping to explore the depths of human intimacy, there is no other way but to photograph it from within.

Elinor Carucci has made intimate relationships the focus of most of her photographic career. Her first major monograph, _Closer _(Chronicle Books, 2002), documented her early twenties both in her native Israel and in her adopted home of New York. The photographs focused on her now husband, Eran, as well as her parents and grandparents. Selections from her series Mother (Prestel, 2013)—a culmination of nine years spent photographing the birth and life of her twin children, Emmanuelle and Eden—is being exhibited in London this fall. As in any relationship, give and take between Carucci and her family/subjects is central, a dynamic that simultaneously colors the work and feeds back into the relationships themselves.

“The people I photograph in my personal work are the people I’ll die for,” Carucci says. “It’s the few people that I can’t give more to—my children, husband, mother, father. It’s another way of communicating, and another way for them to see themselves—it shows them something at the same time. But ultimately it’s something I do for myself.”

Alessandra Sanguinetti’s relationship with children is at the center of her work, too, although the children are not her own. Her series The Adventures of Guille & Belinda began in 1999, when she first photographed the cousins, ages 9 and 10, in rural Argentina, where she had gone to take pictures of their grandmother Juana’s animals. They were frequent fixtures at Juana’s, and eventually, “instead of shooing them away, I started photographing them,” Sanguinetti says. “I was shooting them without even thinking it was work. My first idea was to just do a single story trying to figure out what they imagined life to be, just so I could get into their world.”

After four months of making these pictures, a project took shape that continues today. At first, Sanguinetti would give prompts based on what the girls were talking about as they played, or sometimes she’d act like a director in an improvised play, giving them cues and letting them unfold the rest. “It was always a particular kind of collaboration and play between the three of us,” she says.

Like Sanguinetti, Doug DuBois began photographing his immediate family for reasons more practical than artistic. His mother and father, his younger brother Luke, and his sister Lise and her son, Spencer, were a captive, patient audience DuBois could depend on as he refined his early photographic technique. DuBois’s family portraits, which he has pursued for nearly three decades since, are striking in their color, composition, form, and candid appearance. Yet DuBois has avoided a decisive-moment approach, instead preferring to set up his camera (he typically uses medium-format) and lights for carefully composed sittings with his family. For DuBois, such controlled conditions often have yielded the most revealing images.

“The person has to give, and as the photographer, you have to put them in a position where they feel generous enough to offer a view of themselves,” DuBois says. “Whether it’s ‘true’ or not is a different story, but that generosity has to be there.”

DuBois’s portraits span traumatic times. Shortly after the project began, his father fell from the walkway between cars on a commuter train and spent the next two years recovering. And with the added responsibility of caring for her husband, DuBois’s mother had a nervous breakdown. In his book, _All the Days and Nights _(Aperture, 2009), these stories are present just beneath the surface.

“I don’t try to tell stories explicitly, but I want to evoke stories,” DuBois says. “I want to evoke experiences so people can project their own desires and hopes onto the image. It plays with fiction, but I generally use the stuff of life—my life—to create more general narratives,” DuBois says. “They’re truthful, but I’m not sure they’re authentic.”

Regardless of their specific content, the stories embedded within such intimate portraits have two tellers. Many portraits are inherently collaborative, but when the subject-photographer relationship is an intimate one, the nature of this collaboration becomes central to the work. As viewers, we not only see the emotion transmitted by the sitter’s face, body, and surroundings, but we also sense the face of the photographer, unseen but equally present, shaping the moment further.

Frequent and unfettered access to their subjects also allows these photographers to include a third subject in their portraits: time. For Sanguinetti, the cousins’ passage from youth to adulthood became central to the series. “I find following someone through time fascinating,” she says. “You can step back after a few years and see patterns that are impossible to see in the moment.”

DuBois’s work has been punctuated by long gaps in which he hasn’t taken any photographs of his family—either because they weren’t nearby or because they all needed a break from the camera’s scrutiny. But as his mother faces the inevitable challenges of old age, he continues to photograph her. And Carucci says that being a mother will always be part of who she is as a photographer and an artist.

Among these photographers, only Fouhse feels as if his project has an end, as Stephanie slowly progresses through recovery. Last year, Fouhse released Live Through This (Straylight Press, 2012) a book of the portraits he co-authored with Stephanie. Fouhse still photographs her for his blog when they get together to speak at the occasional gallery show or book promotion, but even so, “the project feels over,” he says.

“It’s kind of strange—there is certainly a drama deficit in my life now,” Fouhse says. “I’m not sure I miss it all the time, but I definitely miss it some of the time. It was a once-in-a-lifetime story.”