This week, the BBC is honoring the 50th anniversary of the declassification of tens of millions of aerial reconnaissance photos... 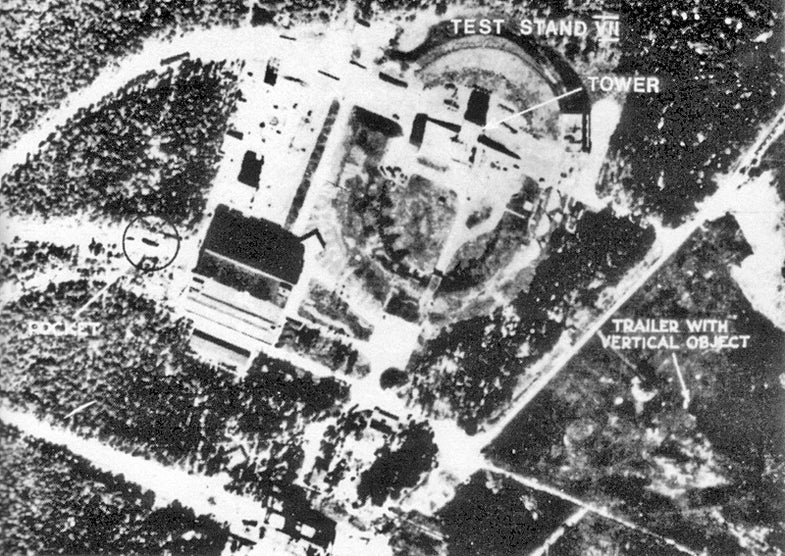 This week, the BBC is honoring the 50th anniversary of the declassification of tens of millions of aerial reconnaissance photos taken by the Royal Air Force during the Second World War.

In one of the world’s most sophisticated early photo reconnaissasnce programs, “photo interpreters” based in Medmenham, England poured over thousands of images collected daily by Allied reconnaissance aircraft for wartime intelligence. Most famously, the Medmenham base was crucial in the identification and eventual bombing of Nazi Germany’s secret V-1 and V-2 rocket development sites. As flying bombs began to fall on London, “Operation Crossbow” commenced with urgency, charged with stopping Werner von Braun’s wartime rocketry program. In a situation that would increasingly repeat itself during the Cuban missile crisis, the leadup to the invasion of Iraq, and countless other modern military operations, photo interpreters learned to spot the telltale ski-shape V-1 launch ramps, eventually tracing them back to a secret base in Peenemünde. Many of the planes were equipped to capture stereoscopic imagery which, when viewed with parallax glasses, gave the landscape a 3-D effect to make spotting vertical launch towers easier.

A video on the BBC site details the massive scale of the operation. The RAF’s wartime photo library—one of the world’s largest single collections of aerial photography—is currently housed at the National Collection of Aerial Photography in Scotland, where’s they’re still used to help locate unexploded ordinance across Europe, as well as to monitor changing land use on the continent in the postwar period. Browsing is not extremely intuitive on the NCAP’s website, unfortunately, and high-res viewing requires a paid subscription. But a selection of 10,000 images is viewable on the slightly better History Pin site.