Mario Testino Does a Shot of Macallan

Scotch and soda? A natural combination. Scotch and photography? Not so obvious—but single malt purveyor The Macallan is trying to... 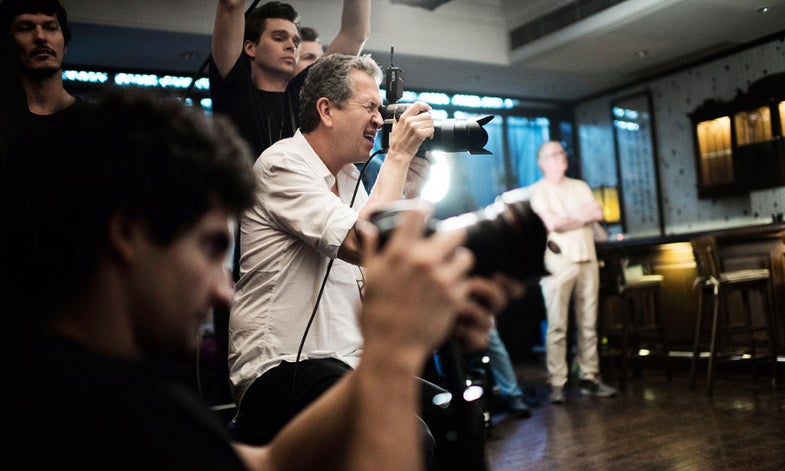 Scotch and soda? A natural combination. Scotch and photography? Not so obvious—but single malt purveyor The Macallan is trying to change that via its Masters of Photography Collection. Over the last five years, the company has made it a habit to commission top photographers—the roster, so far, includes Annie Leibovitz, Rankin, Elliott Erwitt and Albert Watson—to shoot limited-edition portfolios that get packaged with limited-edition scotch. “Photography is the ultimate contemporary art form,” says Ken Grier, director of malts for The Macallan, offering an explanation for the collaborations. “As with whiskey, when you have an exceptionally good photo, you can find something new to appreciate each time.”

Latest to join the superstar lineup is fashion specialist Mario Testino. Like the other shooters, he was pretty much given a big budget and carte blanche to do what he does best. While Erwitt focused on his candid snaps and Leibovitz produced heavily controlled portraits, Testino brought a sense of high-style to the Masters of Photography series. What drew the scotch maker to commission Testino? “Mario is the world’s ultimate fashion photographer,” says Grier. “He’s renowned for capturing real beauty, vibrancy, and energy. He transforms reality into an even more desirable version of itself.” And, as we all know, a good bottle of scotch can provide the same transformative outcome.

Those who spring for the $3,500 Testino portfolio will get one of six limited edition prints, a small book of photos (containing 20 additional shots) and a bottle of scotch that has been specially blended from six different casks along with smaller bottles of the six single-cask scotches that went into making the blend. It’s all packaged in a handsome, black lacquer box, and limited to 1,000 units. For Testino, part of the draw is the fact that scotch happens to be his tipple of choice. Plus there was the opportunity to shoot wherever in the world he desired. “We shot the campaign in Beijing,” he says. “I find the city to be quite mysterious but also full of energy and excitement. I like to bring the moment to life through the character and energy [of my subjects]. I captured the moment when people get together to celebrate, in a whiskey environment—a whiskey club!”

Grier’s not yet saying who’s up for the 2015 Masters, but he acknowledges that the pool to choose from is pretty deep – and that he wants to make things as alluring as possible for the biggest names in the game. “There are a great number of iconic photographers that we would still like to work with,” he says. “We have the capabilities in terms of liquid, locations, and genre to let our imaginations run wild.”