Since his youth, Marc Yankus has straddled the worlds of photography and painting. His new series, “The Space Between,” uses... 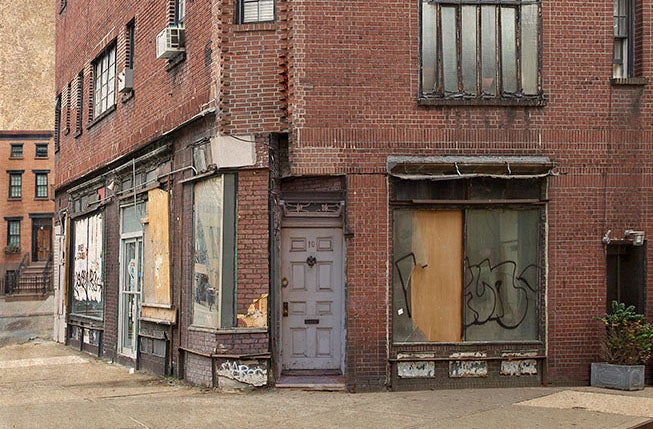 Since his youth, Marc Yankus has straddled the worlds of photography and painting. His new series, “The Space Between,” uses aspects of both to create images that are both familiar and strange. Here, he speaks to Marc Erwin Babej about his process.

How did you get into photography?

For many years, I was a bit torn between painting and photography. At the High School of Art and Design, we had majors, which is rare in high school, and I picked photography. When I did my Bachelor of Fine Arts at the School of Visual Arts, my major was painting.

While I was at school, I was experimenting with collage. Over time, I felt limited in what I would create, so I started creating my own images. That opened up a whole new world. It didn’t take long until people started calling me a photographer.

Why did you turn to photography proper?

I started photographing cityscapes in the late 1990s. I was always interested in light, shape and form, and New York City is rich in all of these. It’s my canvas and model. When I was 11, after my parents got divorced, my mother and I moved into the city with my siblings. I remember leaving the calm, suburbs of Long Island was a big transition—going from green to gray, and to find myself in canyons of the city that were overwhelming and exciting to me. For me, the city became a safe haven because my home life wasn’t. To find peace, I had to go outside my home, and so I spent a lot of time exploring the city.

Your work features buildings prominently, yet it doesn’t come across as architectural photography

I never saw myself as an architectural photographer. It’s not about the buildings themselves and their features, but about what I feel when I experience them. It’s about creating my own world, a magical space for my memories and imagination.

In my earlier works, soft focus became my visual vocabulary—a state in between in and out of focus. Soft focus was my focus, in a poetic sense. It invites to see images less in literal way, and more for their color, light and shape. After all, these were the aspects that mattered the most to me.

But your current series, “The Space Between,” is not soft focus

A few years ago, I started exploring sharp focus. I started to focus on individual buildings, not extraordinary ones, but buildings we walk by every day and ignore. Some of these started popping out to me, and I wanted to explore showing something different with them. I wanted to visualize what I was experiencing with these buildings. I could feel these buildings – the brick, the detail, everything around them faded away.

They were kind of an anesthetic. For example, I was on the roof of a friend’s studio and noticed this building across the way. It was so unusual: tall, skinny, from the 1920s and had these unusual rectangles along the side. I felt drawn to it because it seemed flat and three-dimensional at the same time. I felt I had to capture this quality in a photograph.

In “The Space Between,” the buildings are visually separated from their surroundings. How did you achieve this effect?

I add texture to the image and fade out the surrounding buildings in post-production. In the portrait of the Goldman Sachs buildings, I deleted several buildings that seemed distracting and faded several others. I had never done that before, but it felt liberating. Not from a technical point of view, but in terms of placing what I felt was the proper emphasis on what had inspired me about the building in the first place.