The Man Behind Humans of New York: Brandon Stanton

It is a cool May afternoon in Manhattan’s Chelsea neighborhood. Brandon Stanton, the street-photography phenomenon who in just two and... 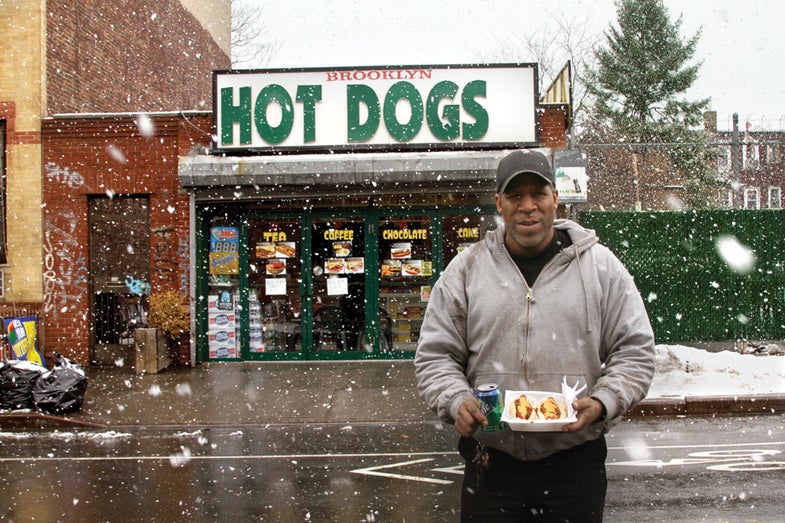 It is a cool May afternoon in Manhattan’s Chelsea neighborhood. Brandon Stanton, the street-photography phenomenon who in just two and a half years has amassed about a million followers (between Facebook and Tumblr) for his Humans of New York project, prowls a stretch of West 14th Street. Dressed in beat-up chinos and a gray thermal shirt, Canon EOS 5D Mark III (with a 50mm f/1.2 lens) clutched in his hand, he searches out subjects that the Bill Cunninghams of the world might pass by. Asked to describe his ideal subject, Stanton, 29, can’t articulate what he looks for. “I don’t have a pattern,” he says. “But if you could discover a pattern, it’s probably kids and old people”—with a bunch of other types in between.

Stanton estimates that he walks six miles per day and one mile per subject. His pace quickens when he spots three female African American chefs wearing toques and whites. He approaches them gently, collapses his lanky six-foot-four-inch frame, and morphs into an innocent New Yorker who’s looking for a quick exchange of positive energy and easy collaboration.

Once they agree to be photographed, he subtly positions them on a stoop, crouches down, reels off a few shots. Next comes the critical task of getting a quote that will accompany the photo when it appears online. He begins with an obvious question: What’s the worst thing you ever saw happen in the kitchen? “A guy’s face caught on fire.” Next comes the not-so-obvious follow-up. Stanton wonders whether they laughed. “We did,” one chef volunteers, “after he went to the hospital and we knew he was OK.”

Since 2010, Stanton has posted some 5,000 photos to his website. He’s appeared on the Today show and has a Humans of New York book coming out from St. Martin’s Press in the fall. That publication is probably the least interesting and most traditional medium for Stanton’s work. With Humans of New York, he has done nothing less than create a fresh form of photography that capitalizes on the connective possibilities of social media. In doing so he may represent the future of photography itself. He is his own editor, curator, and publisher, and his audience is larger than any traditional medium could allow. Stanton’s wide-reaching success heralds a new era when what matters to the viewer is having a direct connection with the artist and his work. His audience doesn’t care about credentials or credits, or the fact that he only started shooting regularly a few years back. Thanks to his prolific digital output, he’s quickly evolved into one of the world’s more popular photographers, corralling nearly three times the Facebook likes of, for instance, Annie Leibovitz.

Among the schoolkids of Gotham he maintains rock-star status—as evidenced by the dozen or so teenagers I see approaching him, including one boy in a red sweatshirt who shakily asks, “Can I hug you?” Stanton’s analog humanity in a world gone madly digital has clearly struck a nerve.

Stanton’s daily quest to chronicle five or six interesting lives began as a hobby in 2010, when he was trading options in Chicago. The job became a grind and he unwound on the weekends by taking pictures downtown. After getting laid off, Stanton decided to focus on the single thing he loved doing: photographing interesting strangers on the street. The surprising but revelatory captions—such as one from a hookah-smoking fellow who declared, “Egypt is like a mango”—grew out of conversations with his subjects. His aha moment came after he posted an image of a green-haired woman dressed in green. “It wasn’t a great photo; the lighting wasn’t good and I botched the composition,” he recalls. “But she said to me, ‘I used to be a different color every day. Then one day I tried green and it was a really good day. I’ve been green every day for 15 years.’ I put the photo up, added the caption, and it became the most popular photo I ever posted.”

Quotes became integral, visits to the site increased dramatically, and Stanton’s confidence lifted. “The first thousand fans you gain by the quality of your work,” he says, adding that he went from zero to 3,000 in one year and 3,000 to 300,000 in the next. “You reach a point where people give you a chance because so many other people are following you. Once I started getting 10 or 15 new fans per day, I knew I’d go to a million. I’m a hard-ass worker. I knew I could work harder than anyone else.”

These days he routinely receives (and declines) corporate gigs, and offers for promotional deals roll in (he turned down Canon’s social-media arm because they wanted him to promote a camera he doesn’t use). He did one gratis deal for Facebook—the company Stanton says played a major role in HONY’s existence. “Facebook changed my life,” he explains, adding that discussing it actually makes him emotional. “Everything has been possible for HONY because social-media platforms showed an interest in this new art form and found an audience for it. HONY would have a hard time flourishing under search engine optimization, which helps you find things you know you are looking for. Social media helps you find things you didn’t know you were looking for.”

Stubbornly independent, Stanton says that he has no problems with making money. But it has to be on his terms. He sold some prints to generate income and sold some more to help raise $250,000 for Hurricane Sandy relief. After DKNY used his images without permission, Stanton passed up the opportunity to sue or settle and received good-guy status for life by having the company make a $25,000 donation to the YMCA in Brooklyn’s Bedford-Stuyvesant neighborhood, where he works out every day.

Stanton hopes that he’s creating his own genre of photography—he didn’t even know who Diane Arbus and Garry Winogrand were before he started shooting. When he thinks about success, he thinks about spending half the year traveling to world capitals and photographing his Humans there. “I want the money to facilitate what I am doing; I don’t want what I am doing to facilitate the accumulation of money,” he says. “I have very little overhead, I love taking these pictures, and it’s what I would do if I had all the money in the world. So why do I need the money?”

In Chelsea, Stanton spots an old man in a red windbreaker standing unsteadily next to a traffic light. Stanton charms him into posing, then asks him to name his greatest struggle. “Getting across this road is going to be pretty tough,” he says. That’s when Stanton lies down in the street and photographs the man making it to the other side.

Stanton quickly finds his next subject: a bearded man holding a walking stick. After his shot, the photographer bounds back and reports, “He asked me if I wanted to hear the world’s greatest haiku.” Then Stanton adds something that encapsulates the small truths of Humans of New York. “It was solid. But all that mattered is that he thought it was the greatest.”

HUMANS OF OTHER PLACES__

HONY is so popular, it’s no surprise that copycats around the globe have sprung up.

Maybe Brandon Stanton makes it look too easy. Or else people fall in love with his efforts to convey a city’s character through portraits of its people and long to be a part of it any way they can. Whatever the case, his Humans of New York has inspired over a dozen other Humans sites, stretching from Philadelphia to New Delhi to Melbourne. While Stanton is at best ambivalent about the copycats, he appreciates that his work has inspired them. “Artistically, I want to encourage everybody,” he says. “It’s against the spirit and ethos of this project to prevent people from doing what they like.” Stanton doesn’t endorse any of the other Humans sites and says he doesn’t look at them these days. Here are some of the more interesting imitators. Each of them has a Facebook following.

This series stays true to the HONY style with interviews and questions, and its photographer averages several posts a day.

The Souls site has a different name but a similar format, and it features close-up portraits more than environmentals.

This smaller group focuses on students at Manhattan’s Stuyvesant High School, where Stanton is beloved.

This spinoff shows off the Israeli city’s diversity and reality on the streets.

Open for submissions, this Humans site gives viewers a glimpse into the everyday lives of Iranians. With 14,266 likes, it emerged after Stanton traveled to Iran himself. Facebook is blocked there; Stanton has 25,000 Iranian fans anyway.