“I tend to use the dumbest tools, the ones where the computer does the least” 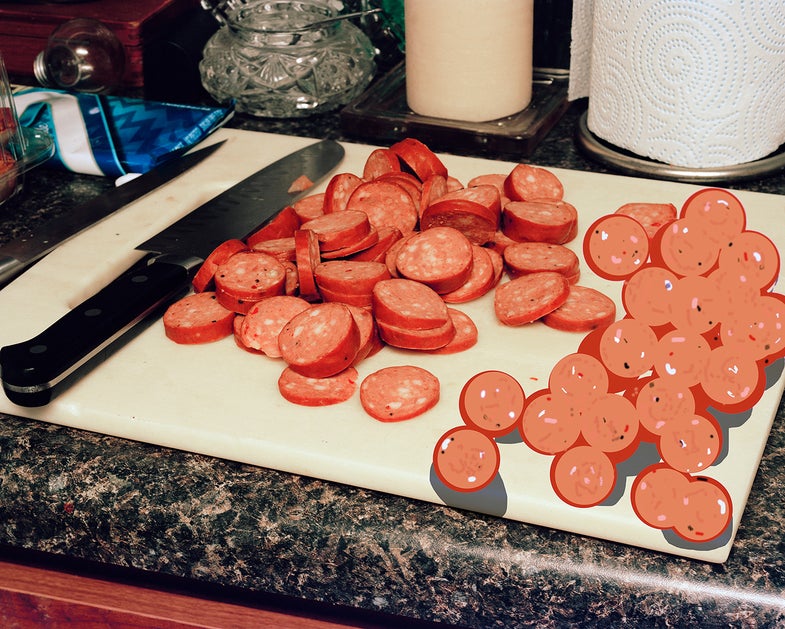 When I first meet Lucas Blalock, it’s at the opening for his solo show, Low Comedy, at Ramiken Crucible in New York City. He’s holding a donut in his hand. “A friend gave this to me, and I’m not sure what to do with it,” he says a little abashedly, laughing.

There’s a kind of playful disjointedness here: in this introduction; in the crowd of gallerists, collectors and peers who’ve amassed to see his work after following a hand-scrawled map posted to the gallery’s usual location on Grand Street — down a couple blocks, through an Apple Bank, and downstairs into a windowless boiler room. The industrial space bleeds into the exhibition of photos hung from wire on the walls or framed in freestanding metal signposts. Being able to show in this space gave the artist the opportunity to “experiment and do some weird shit,” he says.

This about sums up Blalock’s M.O. His intentional Photoshop fails resonate with the slapstick and physical style of comedy the show’s title suggests: there are musical notes in cereal bowls, a stuffed monkey roughly transformed into the shape of perhaps a dog, a seated subject whose only physical attributes are her arms, a nose and a scribble of face coming through the strokes of a Photoshop layer mask.

“Humor can carry a lot of other things with it. It also sort of invites the viewer to get involved,” he says over email.

There’s also a certain humor in the incoherence of the work, in the way he uses elementary Photoshop techniques to parse together objects, compound time and reimagine space. It could be easy to interpret the crude brush strokes and aggressive punches of the clone stamp or the simple addition of a digital drawing of pepperoni next to the real thing as a comment on photo manipulation. But the amorphous images have a way of elevating the chaos inherent to the human condition, and in doing so, give the viewer something new to chew on. These intentional Photoshop fails is anything but low art.

Blalock, who was featured in the Museum of Modern Art’s Ocean of Images: New Photography 2015 exhibit is among a group of photographers who are thinking seriously through photo-based processes as a means of working out problems inherent to image making and image dissemination. He likes to think of his work less in terms of series, but rather, a continual “working things out”— his preoccupations and the questions he’s attempting to answer through experimentation.

In this grouping of images, he says, there’s a “sublimated violence” and a “darkness” that was only tangential in earlier work. “I feel like I have been thinking a lot lately about simultaneously loving something and wanting to put pressure on it,” he says.

He’s also beginning to think about the relationship of digital processes, like Photoshop, to the body.

“There is an attempt to draw out relationships through anachronistic technology—a phone, a switchboard, mailboxes, newspapers, a piano—all of which have a very intuitive relationship for how to use them: they were designed to be understood by the body. Using these things, especially the switchboard, has a kind of literalness about it—the operator connects two points by plugging a wire into the appropriate socket,” he explains. “I have been thinking a lot about relating the tools I am using in Photoshop back to the body, to being used by the body and these technologies provided a foil for this.”

Even though the process of using Photoshop is incongruous with the action of the body to produce these tableaux [for example, we cannot approximate a physical connection to the color temperature changing out a window but everything else remaining the same like in Financial Times (evening edition) and Financial Times (morning edition)], there’s a sense of serenity in the fragmented picture plane. Blalock’s process is intimate and very hands-on, all things considering; he carefully chooses his tools to create his desired aesthetic. Right now this means shooting with an analogue camera, then scanning his film.

“The slowness of the camera, and all the variables involved in getting the film into the computer, have proved valuable to the work,” he says. Afterward he asserts his mark-making upon the image.

“I tend to use the dumbest tools, the ones where the computer does the least,” he says. “There is a sense of possibility that hangs on when you do something plainly that I feel myself holding onto.”

There’s something about the rawness of the space, the donut and the boxes of faux gravestones left over from seasonal décor in the storeroom on the way into the gallery that somehow all fit into this new trope of photo-based art hanging on the walls. In the subtle tension there’s a glimmer of hope, of something on the brink of bursting through the fissures.

Low Comedy is on view through May 22. www.ramikencrucible.com