The photographer speaks with us about her six-year documentary project that almost wasn’t. 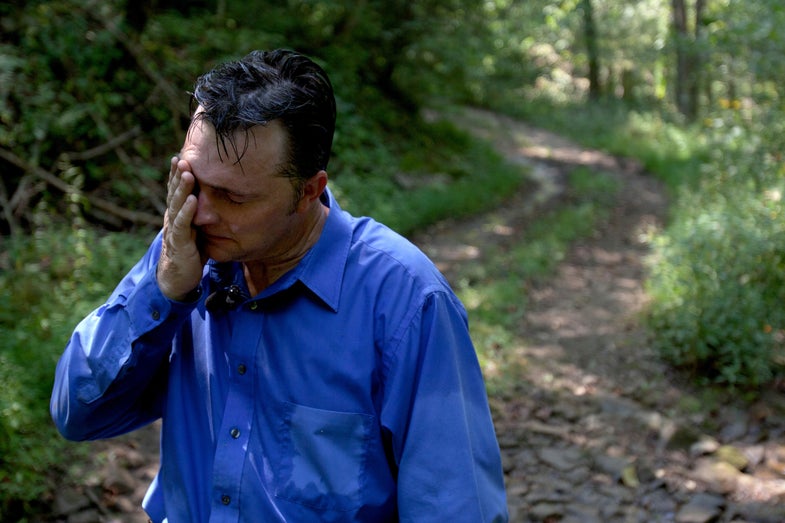 In 2011, Pond traveled to West Virginia to begin documenting the community and practices of Signs Followers, members of the Pentecostal Holiness church who take a literal reading of a passage from the Gospel of Mark:

16:17-18 “And these signs will follow those who believe: in My name they will cast out demons; they will speak with new tongues; they will take up serpents; and if they drink anything deadly, it will by no means hurt them; they will lay hands on the sick, and they will recover.”

She began focusing on Pastor Mack Wolford and his family, but Mack was fatally bitten by a rattlesnake during a service in May 2012.

“Honestly, when he died I thought that was the end of it,” says Pond, who had become close with Mack and his family. “I was traumatized and they were traumatized, and I had just thought, No I just can’t work on this anymore.”

But a year after Mack’s death, Pond was invited back for a memorial service for Mack and reconnected with the family. It was during this process of overcoming her own feelings of guilt and trauma that Pond began thinking of her project not strictly as a photojournalistic document of the Signs Followers, but as a narrative of how her journey entwined with that of the Wolfords.

Pond was awarded the CDS/Honickman First Book Prize in Photography in January for her work, which will be published as a book through Duke University Press and the Center for Documentary Studies at Duke University in November of this year.

American Photo spoke with Pond about her experience working on Test of Faith, reporting on communities of faith and dealing with trauma.

What was it about this topic that you were interested in?

I was mainly interested in what is serpent handling, why do people do it, what keeps them going through the generations, and who are they. I’d read about it in an anthropology class and that’s the first I knew of it. I had no idea it existed in the U.S. So I think that’s what initially prompted my work. I lived in Washington, D.C. at the time I started this work, and I had some time off, so I went down there to Jolo, West Virginia, in February of 2011. I didn’t meet Mack until that spring, and by that time I guess I’d gotten a little bit more of the lay of the land and gotten to know the community a little bit more.

At first I was just curious about the practice, but then I got more interested in the community itself, the Wolford family, and who Mack was and how this factored into his life. I think that’s what my early work explored. Up until the day that he was fatally bitten by the rattlesnake. And then it just became a much more personal project after that, I think, with me learning to forgive myself for what happened and for having not done anything to help save him, because that was against his medical beliefs. And learning to forgive myself and then building a stronger relationship with his family. That’s what the second half of the project is about, up until the present day.

Originally I approached it from a normal photojournalistic perspective. You’re just an observer, although I got relatively close to Mack. But after he died, and in the course of my work with his family, I became much more involved. I don’t really see it as a photojournalism project, per se, anymore—because I feel like I’m documenting our friendship and how we helped each other heal. It’s a personal documentary project at this point, not really so much about serpent handling. Although I think the documentation of our relationship shows a lot about who they are as people, as much as what the tenets of their faith are.

The images of his death that I published initially, some of them were sensitive, and I ended up causing the family more pain by publishing the photos. There was an additional level of grief and guilt on my part for having unintentionally inflicted pain on other people. In combination with the the aspect of his dying, and having not intervened, it felt horrible. I think his family just embraced me after everything we’ve been through together. Forgiveness and redemption, that’s kind of what I learned through them, and learning to forgive myself, too. I don’t really come from a very strong religious background, so it’s not something I was terribly familiar with.

Do you have experience covering life and death? Not necessarily conflict, but situations where lives are at risk?

I definitely haven’t been in a situation that intense before. I’ve been in other situations that are difficult, various humanitarian issues. I studied abroad in Senegal several years ago. I was working on a project about kids who were begging as a part of their religious education, to beg on the street, and that was difficult to see—and the conditions some of them live in. That feeling that I can’t really contribute anything other than photographs to help that condition.

Seeing [Mack’s death] up close, in person, it was a shock to me. I don’t think I actually processed what happened until a couple of years after the fact. That’s another weird thing about photography, I think it tends to mentally sort of remove you from the situation. So to some extent I think it put this temporary distance between me and what was unfolding. And maybe I was using it at that point as a way to avoid what was happening. I’m not sure. It took me a long time to process what happened.

This is sort of a tangent, but I’ve worked in mental health recovery and the arts for a while, too, showing the artwork of people who have been affected by mental illness. I worked for this one program for a while, called the Athens Photographic Project. It was interesting to see how people used photography to overcome or deal with a lot of their mental illnesses, and part of it was that it takes you out of your head. And that’s what a lot of them have said: that it sort of takes you out of what you’re worrying about, and you just focus on what’s in front of you. I think in my case, maybe to some extent it was helping me not think about the trauma that I was experiencing, but just focus instead on documenting it.

How did you make these deeply religious subjects comprehensible to viewers who don’t share their faith?

Before I started the serpent handler work I looked at what had been done already and the vast majority of it was photographs of people handling snakes, not surprisingly. Because that’s what you think of when you hear about the practice. I’ve been trying to show that there’s a lot more to it than that.

I think with religion, in general, it’s very easy to put people into boxes or categories, but I think once you get to know the people behind that, and their culture and who they are, it really can help shape your understanding of the religious practice a lot more. That’s what I’m trying to convey through my images and I hope that’s what people will pick up on.

After Mack passed, was there a specific point at which you realized you wanted to continue working on this story?

I didn’t know if I would be welcomed back, honestly, or if it would be appropriate for me to go back, but [the family] invited me down for a memorial service the year after [Mack] passed, so that kind of reopened the story. At that point I wasn’t consciously working on a story, either, I just wanted to go back and see them again. Things just kind of evolved from there.

How has the family responded to the body of work?

I think they’re pretty happy with it. I’ve shown them what I’ve been working on so far, so they’re well aware of the process. I want to keep them involved in the process, too, so that it’s not only my narrative. I think they also want Mack to be remembered and Mack’s story to be shared, so that’s one of the reasons I think they’re on board with it.