Julie Blackmon on capturing magic in the suburbs

The photographer shares her world behind the white picket fence. 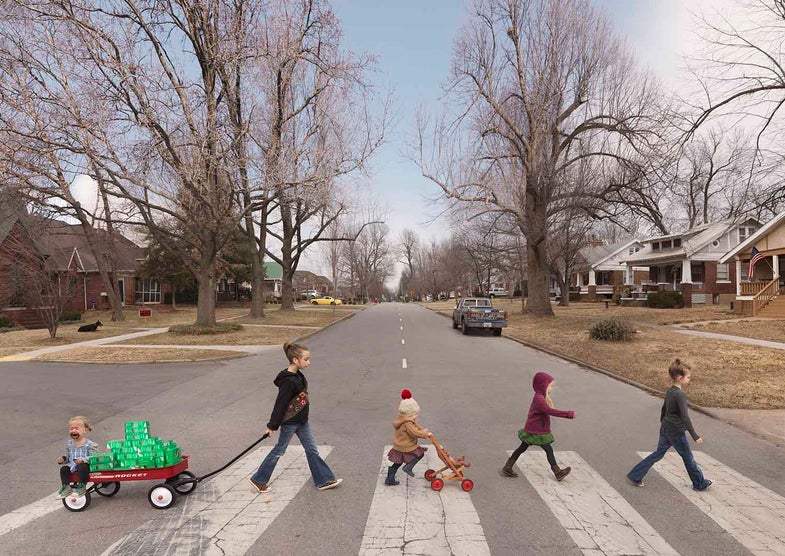 According to the U.S. Census Bureau, Springfield, Missouri, is a city of about 160,000 about 100 miles southeast of the geographic center of the United States. Its population is about 89 percent white, 96 percent U.S.-born, and 51.5 percent female. Although Julie Blackmon was born in this Springfield (in 1966, the oldest of nine children) and she still lives and works there, her pictures depict a through-the-looking-glass version of the place.

Layering together multiple photographs to create surprising and haunting tableaux, Blackmon stretches the fabric of the mundane until you can see the chaos, absurdity, and just-plain-weird that lurks beneath. In one image, “New Chair” a jarringly modernist living room object erupts from a perfectly banal FedEx truck like Harold Hill showing up in River City. To those witnessing the delivery, the shiny new distraction is all that matters, while life inside the photo continues as normal, and no one seems to notice the kid who’s stuck his head in the bubble wrap.

“I know I’m very much defined as the ‘family’ photographer, but I don’t think of it quite this way,” she says in an email. “I’m just looking around at my everyday life and, like any artist, trying to make sense of it.” It just so happens that family life is chock full of material to photograph, and, for many viewers, happens to also be pretty relatable.

Blackmon’s perspective seems to come straight from the fact that she is making work about the place where she herself grew up; her own memories inform the way she illustrates the present. Reflecting on her own experience, she says: “I think we have never had more nostalgia for the past—the days we didn’t wear helmets to ride a tricycle, or where we climbed 50-foot trees without our parents giving it a second thought. I think about this a lot. This is where I find the narrative and the humor.”

Blackmon studied art education and photography at Southwest Missouri State University, then resumed life in her hometown as an artist, teacher, and mother of three kids. Her first major series, Mind Games (2004), explored childhood play through black-and white-photographs which, like play itself, focus equally on objects and imagination. The series won awards from the Santa Fe Center for Photography, Society of Contemporary Photography in Kansas City, Missouri, and Photospiva—and the world noticed. In 2007 she was included in PDN’s 30. She was American Photo’s Emerging Photographer of 2008. Now she has work on display at the Museum of Contemporary Photography and the Catherine Edelman Gallery in Chicago, the Robert Mann Gallery in New York, the Fahey Klein Gallery in Los Angeles, the Photographers Gallery in London, and Photoeye Gallery in Seattle. Her photographs have appeared in Time, The New Yorker, and The New York Times. She continues to live and work in Springfield, and she is A-OK with that.

“Maybe because I’ve always lived in the same neighborhood I grew up in, I can’t really imagine doing the work I do in a place like New York or L.A.,” she says. “In a town like mine, where you know everyone, or they know you, shooting is so casual. No location fees, no model releases, and I can get wherever I need to in about five minutes.”

For Blackmon, urban centers are for visiting and for gathering inspiration. “I love the energy of places like New York. Every time I go to the Met, I leave there so moved that I cannot wait to come home and get back to work. But I don’t feel like I have to live in these places.”

In aesthetic and technique, Blackmon pours a wide palette into her pictures—the photographs of Sally Mann (more their substance than their style); paintings from Jan Steen and other 17th-century masters to Normal Rockwell; the films of Tim Burton; illustrations of Edward Gorey, children’s picture books, and The New Yorker. They share with her work a dark whimsy that leans on storyboard-esque composition—limbs cut off at the edge of the frame, dramatic expressions directed at something out of view—to tell the story.

“Maybe it lends itself well to the humor I’m trying to create, and just helps make it more interesting overall…because you don’t have the entire story,” she says. “The fragments leave you a question as to what’s out of the frame, as well as the moment that came before and the moment that might come after.”

Her work also relies heavily on Photoshopping multiple images to get all the elements and proportions right (no easy task when the subjects are under age 10). “[This method isn’t new] to things like painting or film,” she wrote in a piece for the Guardian in 2014. “Van Eyck worked that way, putting details from lots of different paintings into one image. Not much has changed except the tools.”

Maybe it’s because she’s situated off the stereotypical culture map, but Blackmon’s attitude toward what she shoots and the techniques she employs is rather unassuming. Her go-to approach to most shoots? “Trial and error. I zoned out during any kind of technical instruction I was ever given in my photography classes,” she says. “Until it mattered to me and what I was trying to do, I didn’t have the patience for it.”

Generally Blackmon keeps her shoots minimalistic and improvisational. She decides on a setting, watches the light over several days, determining the best time to shoot, and takes several test shots. “Sometimes I like to bounce one light off the ceiling if I’m working inside, but other than that, I put most of the effort into finding the right backdrop, then trying 20 different ideas with the lighting,” she says.

Only then does she bring in models. “At that point I start to define the narrative,” Blackmon says. “I try a number of things with them—knowing especially with kids I don’t have much time—and then edit to determine the strongest moment. Once I’ve done that, I start thinking about the other details in the picture.”

Ultimately, the story comes together in Photoshop. Though she demurs at the word composite, she embraces the creative freedom that comes with the technique. “[My work] isn’t photography (at least as we’ve known it), it isn’t illustration, it isn’t painting, it isn’t film—but kind of all of these,” she says.

With each of those experimental steps, reality inches closer to fantasy, and the mundane starts to appear mythic. “I relate to Fellini when he said, ‘The things that are most real to me are the ones I invented,’” Blackmon says. “I think any artist looks for inspiration in everyday life, and has to figure out how to work with what they have.”