Hot on the heels of our look this week at Ed Panar’s “Animals That Saw Me,” it seems like an... 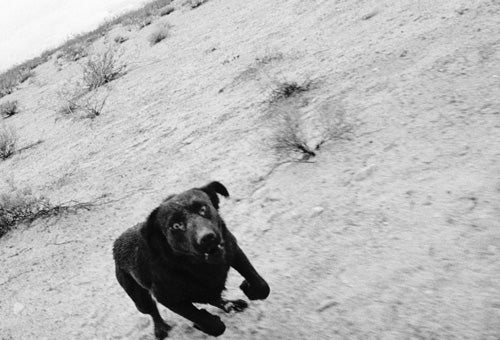 Hot on the heels of our look this week at Ed Panar’s “Animals That Saw Me,” it seems like an appropriate time to share another animal-centric body of photographic work, with a similarly direct title: John Divola’s “Dogs Chasing My Car in the Desert.” In both series you’ll find photographs which use animals as a way to play with the ideas of seriousness and humor in photography. The differences between these two works, though, do run a bit deeper than the range of species they incorporate.

Although the photos in “Animals That Saw Me” span 17 years, it developed organically: Panar said that “it just emerged out of this ongoing collection of animal pictures I started to notice I had.” Divola shot “Dogs” over the course of 6 years, but in an email, he said he knew rather quickly that it would become a series. It was certainly shot more methodically. In a statement on his website, Divola writes:

The process was simple; when I saw a dog coming toward the car I would pre-focus the camera and set the exposure. With one hand on the steering wheel, I would hold the camera out the window and expose anywhere from a few frames to a complete roll of film. I’ll admit that I was not above turning around and taking a second pass in front of a house with an enthusiastic dog.

I’m interested in the way that these two series embrace a sense of humor. There’s something funny about looking at a photograph of a dog running after a car, or a squirrel staring down a camera. Is it even funnier when these photos are presented in the context of “art”? Each photographer has taken up a position where their photos can be appreciated in a light way, while also staking out some more serious artistic ground. Judging from what they have to say about their work–and it’s worth reading Divola’s full statement–I’d say that maybe Panar is coming from below (dogs becoming art) while Divola is coming from above (art becoming dogs). This just means that Divola seems more conscious of his position as an artist.

There are plenty of other interesting series on Divola’s site. Animal enthusiasts may also enjoy “Seven Song Birds and a Rabbit”, while “As Far As I Could Get” is another study of the relationship between photography and process.