I am very opinionated about how food should be. When I see a cut of meat, for example, I know... 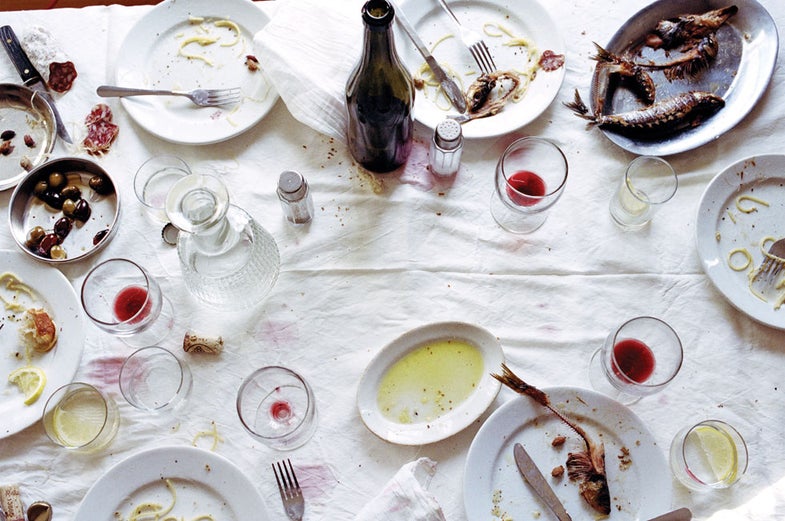 I am very opinionated about how food should be. When I see a cut of meat, for example, I know if it’s right. I never plan out exactly what I’m going to do; it just happens. It’s the same when I set up a photograph. You touch things, you move things, change the light and the angle, and all of a sudden it all comes together—and that’s what it is. That’s it. How I get there and why, I don’t know.

My way of working is different from other food photographers. In Sweden I attended culinary school and then worked my way up from dish­washer to executive chef. Then I got an offer to work at Aquavit in New York with Marcus Samuelsson. I’d never lived outside Sweden, so I took the chance and moved to the U.S. on an 18-month contract. But I’d always been interested in art, and the older I got, the more I got into painting and drawing. I started taking art classes full-time at LaGuardia Community College and working at restaurants nights and weekends. At the same time, I was getting burnt out on the restaurant business. It’s a hard lifestyle. So I decided to take a leap, quit cooking, and stay in school for fine art. I was in my late twenties, and I just took a wild chance. I stopped cooking professionally around 2000.

When I started out, I didn’t want to do food photography. I’ve always collected cookbooks and I read food magazines, because they give me inspiration for cooking and I like the information. I never really liked the pictures, though. As an assistant to other photographers I worked on everything from fashion to interiors to catalogs. Every now and then there would be some kind of food in a shot—half-eaten chocolate cake or something. I worked for a few food photographers, but I couldn’t stand the way they thought about food, the way the food stylist dealt with the food, the way it was photographed. This was the early days, 10 years ago and more. Everything looked very different then. So I didn’t want to shoot food and I didn’t shoot food. I shot portraits; I shot still lifes.

For most of the food shoots I assisted on, things were pretty. The photographers were shooting backlit, with a very shallow depth of field—everything was perfect. I didn’t want to deal with it. Even today I never get hired to do a pretty salad story. I usually get the ugly stories—the food that’s not so photogenic, that’s usually what I get hired to shoot. I don’t mind. I don’t like pretty things.

One of the first guys to hire me, in 2006, was Richard Ferretti at Gourmet. An approach of his was to hire photographers who had never really photographed food before. He wanted people who weren’t pre-editing in their heads: “OK, this is how I have to shoot because I’m shooting for Gourmet, or this I have to shoot because I’m shooting for Martha Stewart Living.” He asked me for a 10-page feature. At first I thought he was joking because I had never done a food job in my life. I figured he’d never hire me again, so I just shot how I thought it should be. It was so much fun to do, and the magazine really liked what I did. That’s when I realized I didn’t have to shoot food the way everyone else was doing it.

I like my photographs to be spontaneous. Ideally, I like to just see things in the world, whether traveling or at home or in the studio, and take a snapshot and that’s it. I want an honest picture.

That’s how the above image happened. I was in Italy early last year and I had this amazing meal at a restaurant in Rome, in the historic Jewish ghetto. When I left the restaurant, I took a snapshot of our table with my little digital camera. I’m friends with Gather Journal‘s founder and creative director, Michele Outland, so when I got back I pitched the story to her. I said, “I want to re-create this picture in a studio or something. Let’s make it massive and really sexy and nice.” It just happened to fit in well with one of the themes they had planned, which was “Traces.”

And that’s what we did. All of us sat down and had lunch. It was Michele and me, and the food stylist Maggie Ruggiero and prop stylist Theo Vamvounakis—it’s her apartment, her props. I had my assistant and some other people. We ate carbonara and sardines and bread and wine, then they all left the table and I took the picture (I moved a few things around a little first). We set up the other shots in the feature in a similar manner. What do you do before dinner? You sit down and smoke cigarettes, have a cocktail, eat nuts. So we did that too. We also did a dessert moment with coffee, grappa, and an empty plate.

Now, projects like this aren’t just having fun and putting on dinner parties. I try different approaches technically to challenge myself. So for Gather I found the first camera I ever got, an old Nikon FM2 35mm film camera, and I told myself, “I’m going to shoot this whole thing with this camera and I’m not going to use a tripod”—the exact opposite of what I usually do. I couldn’t see what I was shooting. Then, I took the film to a Chinese guy in the East Village to one-hour process some plates and I got these four-by-six prints, like we used to get back in the day. The colors aren’t right, there’s no detail, but that was the whole idea. I used those little four-by-six prints as finals for the magazine. They are very intimate.

Usually it doesn’t work that way—most of my photos are set up—but I still want them to look just like something is really going on. I pretend that I’m walking into this restaurant, or this cafe or someone’s home or whatever, and I just saw this and took a picture. I want you to feel the experience of the meal or of preparing it. That’s the whole idea—it’s not just a picture of someone’s untouched plate.

Unfortunately, more and more magazines are not taking risks, not being as creative as they used to be. I guess they have to sell the magazine and so may be reluctant to get too weird. But meanwhile, smaller magazines are coming in, and because they’re independent they can do whatever they want. Gather Journal is one; Swallow Magazine is another. That’s where I get my creative outlet.

When I’m on a job, I always touch the food myself. I haven’t worked much with food stylists. There are only a couple that I really like to work with, and they know me very well. They’re the ones who let me get my hands in there and move the food and touch it, eat it, whatever is needed for a shot. One of my absolute favorites is Victoria Granof. She is the master. She can take you to another level, where there’s a story happening. She and I are very similar in that way.

We did “Guts of the Beast” together for Black Ink, the magazine published by American Express. That was colossal. Often, foods are shot in a pot, a pan, a plate, some sort of tray. I always try to take it to different places, but there’s only so much you can do with a plate of food. So I was starting to think, “OK, what if we just do something beautiful?” Then Black Ink called me up and said, “We’re doing an entire issue on food. We want you to shoot these Fergus Henderson recipes—and you can do whatever you want. You have complete freedom. You can pick your team and we want it to be different.” It was a dream assignment, and a chance to try something a little more conceptual.

Around 2007 I had started a personal project photographing animal parts as still lifes. I photographed sheep hearts and a few other pieces, in black and white and then later in color. For Black Ink I wanted to take it further, doing all the parts, the offal—really beautiful still lifes, but still slightly deconstructed. So instead of shooting a completed, cooked veal terrine, I made a still life with the ingredients—the brain, the cognac, and the seasonings. I kept the light very stark, with no real shadows, so that it almost feels as if you’re under a fluorescent light. It adds to a quality that’s a little bit clinical, a little bit sterile.

The pig’s ears and feet is one of my favorite photographs from this story. When you cook pig’s ear, there’s just a lot of skin and you have to shave it, just like you would shave your beard. Chef Henderson recommends in his recipe that you use a Bic shaver. Angharad Bailey, the prop stylist, brought a pink one just to make it different. And then the way the pig’s feet are crossed over, it’s very feminine. I think it’s very sexy.

It’s really difficult to work with food or with photography without getting into the experience or getting your hands a little dirty. I’ve always been fascinated by latex gloves in working with food, since in Europe no one really uses gloves. Here in the U.S. everyone in the kitchen wears them. Now it’s trendy to eat in a more conscious way, using the whole animal and getting to know the food—starting to take the gloves off in a way. It’s also trendy to shoot like I do, so a lot of my old pictures—the ugly, dirty ones where people said, “Yes, you’re never going to get any work shooting food”—now those are the ones I sell. —As told to Meg Ryan Heery